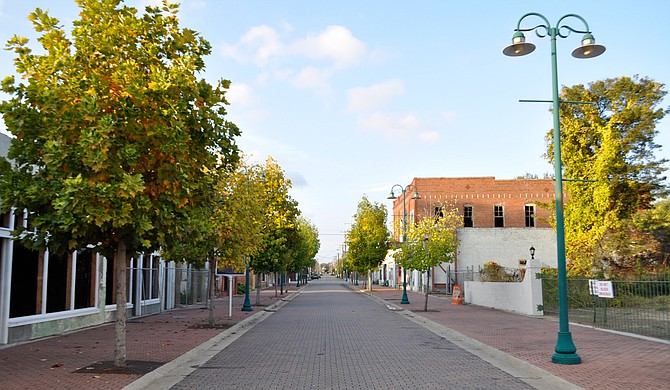 On Aug. 14, the Jackson City Council will decide if Clarence Chapman, who developed Helm Place in the Farish Street Historic District, will get eight more parcels he bid on in January 2017. Photo by Trip Burns/File Photo

JACKSON — Farish Street, the once vibrant African American neighborhood in Jackson, has since become a barrage of empty lots, fallen-in homes and abandoned storefronts, with a few active businesses mixed in. Over the last few years, one developer, Clarence Chapman, has been the catalyst for stark change in the Farish Street Historic District, and his company could continue developing houses in the area with the Jackson City Council's help.

On Aug. 6 the Planning Committee met and approved eight parcels on and near Cohea Street that Chapman's company applied for through the City's Surplus Property Division. Once the City declared it had no municipal need for the land, Chapman won properties based on bids he placed in January 2017. However, they were tied up in the Planning Committee up until the council voted them out of committee on Aug. 6, thus placing them on the agenda for the Aug 14. council meeting for full-body approval.

Supporting council documents say that Chapman would also use these parcels for housing development; however, they are not all on contiguous land.

Part of the holdup of the eight parcels has been public outcry from those who remember Farish Street in its glory days such as Jan Hillegas, who once had a civil rights-related office on the corner of Cohea and Farish streets. As she has before, she asked the planning committee not to take action, even though members wanted to resolve the matter quickly.

"You can get it off your agenda by voting it down—please remember," Hillegas said on Aug 6.

Alferdteen Harrison is a historian who leads a project to restore two homes, The Scott Ford Houses, at 136 and 138 Cohea Street to honor two midwives who lived there. She also sits on the Mississippi National Register of Historic Places Review Board, and was concerned about Farish Street's historic status and what new development could do to it.

"The word was that if they ... did a resurvey of the district that (Farish Street) would be delisted from the national register because of the quality of the houses that were put there and the number of properties that have been lost," Harrison said to the council's planning committee last week.

Chapman's Chartre Consulting Ltd., an Oxford, Miss.-based developer, built a development called Helm Place in 2016 using a tax-credit program. The development was named after a local baptist church, Mount Helm Baptist Church, the oldest African American church in Jackson, which is also in the Farish Street Historic District. The late Mayor Chokwe Lumumba supported the project and attended the groundbreaking less than two weeks before he died.

Harrison wants for at least Cohea Street to be preserved to represent post-slavery African American culture.

"The homes that were built were built primarily after slavery, and I think it's a testament to African Americans out of slavery, many of whom had been slaves, that they built those homes," she told the council.

"So that's why I work so hard on 136 and 138 because I think we are doing a disservice to our ancestors, white and black, because they worked together to develop this area. And for our children of the future. They won't be able to see the work that was done in a collaborative manner because we tore it all down not understanding," Harrison added.

The planning committee members unanimously approved the parcels out of committee, with many citing their faith that future development would adhere to historic preservation guidelines. The focus of this meeting was to finally do something about these parcels that had been in limbo for over a year.

"These parcels have been in committee since before I was elected," Virgi Lindsay of Ward 7 said at the planning committee meeting last week. "There have been many public meetings about this, lots of opportunities for public comment. Without question, it is very important to all of us up here to make sure that any new development that is built in the historic district of Farish Street conforms with the historic district guidelines that do exist."