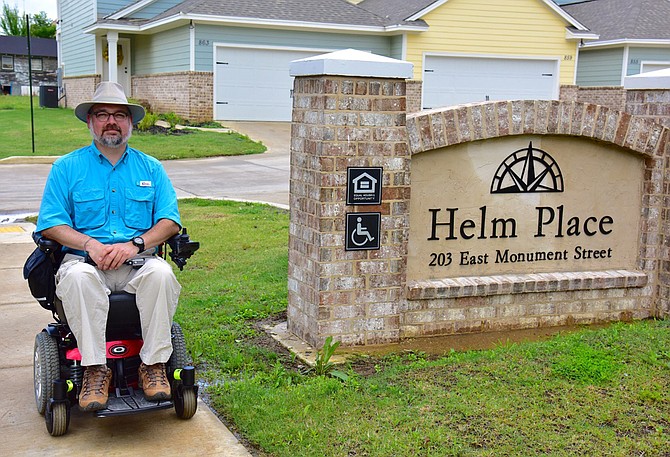 Scott Crawford, who serves on the Jackson ADA Advisory Council, says none of the 88 townhomes in the Helm Place development are ADA-accessible, and he hopes the next addition to the development will be. Photo courtesy Scott Crawford

JACKSON — Not everyone is supportive of expanding the pastel-painted affordable housing units in the Farish Street Historic District.

Helm Place, named for the oldest African American church in Jackson, which is also located in the district, is an 88-townhome affordable-housing development with a 300-person waiting list. Chartre Companies Ltd., the Oxford, Miss.-based developer, plans to expand the community with 70 additional homes, but first it needs the blessing of the Jackson Historic Preservation Commission, which approves all projects in the city's five historic districts.

At the commission's May meeting, developers presented their informal proposal to the commission, during the discussion part of the meeting and promptly walked out, minutes from that meeting show. Chartre Companies Ltd. owner Clarence Chapman said his group also withdrew their formal Certificate of Appropriateness application.

Chapman thinks the commission does not want to give his group a COA to build more homes because it is "'destroying the fabric of that community,' which is absurd," Chapman told the Jackson Free Press.

But the commission's chairman, Jeff Seabold, who was not a member when it approved Helm Place I and II, emphasized that no one is above the law. Seabold said that in large development projects like Helm Place, the massing (the shape, form and size of the buildings) and scale are important because they can start to change the fabric and feel of a neighborhood, something important under federal Department of Interior standards the commission must use as their guiding principles.

The department's second standard for rehabilitation of historic buildings, as well as the site and environment attached, adjacent or related to new construction, says that "the historic character of a property shall be retained and preserved."

"While it's a great thing for the City to be building housing and helping it out, the overall scale of that project is large. It's a very big challenge so we have to be very, very specific about some details and other things to be sensitive to the placement of it," Seabold said.

"When you've got two- and three-story townhouses next to ... the Scott Ford houses ..., it worries people in the neighborhood. We have to consider what that does to those historic sites as well. It's a district; it's not single houses that we're speaking of."

The Scott Ford houses are restored homes on Cohea Street that tell the history of midwifery and home birthing in the early 20th century.

The City of Jackson owns several properties in the Farish Street Historic District that it was prepared to hand over to River Place LLC, who won the bidding process for the land, before last week's city council meeting. The council agenda shows eight parcels of property that it could have voted to officially hand over to the corporation, which Chartre also manages, Secretary of State records show. During the public-comment section of the meeting, some Jacksonians expressed their concerns, however, and asked the council to delay the transfer.

Dr. Alferdteen Brown Harrison addressed the council, asking it to postpone the transfer of the City-owned properties for six months.

"We appeal to you to appoint a special commission or committee to look at what we have allowed to happen to the Farish Street Historic District," she said.   "How do we want to enhance what we still have left? Nothing down there represents anything the way African Americans built it," she said. "... We need to look at the impact of Chartre and the new development there. What impact does that have on our heritage?"

Jan Hillegas, a Civil Rights Movement veteran, also spoke against the transfer of the properties to Chartre, mainly those on Cohea Street county land-roll records show.

"I had a civil rights-related office there 50 years ago on the corner of Cohea and Farish streets," Hillegas told the council. She mentioned other projects in the neighborhood that aim to restore the old structures to the way they used to be—not building uncharacteristic two- and three-story houses.

Council members voted to send the eight-parcel-transfer items to the Planning Committee, allowing the new mayoral administration and council members to address how to proceed with the process.

Farish Street itself was considered a "Black Mecca" back when Jim Crow ruled in Jackson. A project from the Southern Foodways Alliance and the Southern Documentary Project, called "The Farish Street Project," shows that the district served a "separate black population in as equal a manner as the constricting social mandates made possible," right off Capitol Street, the white, segregated epicenter of downtown Jackson in the early 1900s.

Clarence Chapman owns Chartre, an Oxford, Miss., developer responsible for the affordable housing built in the Farish Street Historic District. He plans to wait for the new city administration and council to renew discussions about expanding Helm Place housing.

Fast forward a few decades, and Farish Street is home to a handful of establishments, brimming with potential and partial economic-development opportunities with little to show for past efforts. The Farish Street Historic District was incorporated as a national historic place in 1980, and the City of Jackson designated it as a historic district in 1994.

The Greenwood Cemetery, which some of the pastel-colored Helm Place townhomes face, is also a City-designated landmark.

Chapman said his company went through three or four months of "grinding plan-changing efforts" with the commission the first time around in 2014 to get approved for Helm Place I and II.

He said there was a dispute over the nine rows of brick used on the front of some of the townhomes, which the City ultimately approved, but not the commission.

Both the Belhaven and Farish Street historic districts have specific design guides that developers and architects are asked to consult when proposing plans to build or renovate structures in those areas. Seabold said the City has added checks and balances to its system since the time of Chartre's initial application for Helm Place I and II.

Seabold said he has seen a letter sent to Chartre, which explained the discrepancies between what was permitted to be built and what was submitted in their initial application.

Chapman says the current pushback against the plans is a "bureaucratic turf war."

Seabold said Chartre's informal proposal discussed in the May meeting did not contain enough information to be considered.

"There was not enough information there for me to vote or make any more comment on, other than I need the specific information," he told the Jackson Free Press.

Chapman said his group will continue through the process and plans to work with the new mayoral administration and council members. He said the vacant units in the district that have "no character to maintain" should be removed so the families on the wait list can move into new affordable housing he plans to build.

Beyond historical preservation, however, other Jacksonians have raised concerns of accessibility in the current Helm Place development as well as the proposed extension.

Scott Crawford, who serves on Jackson's Americans With Disabilities Act Advisory Council, could not live or visit a friend in Helm Place if he wanted to, he says. The only ADA-accessible building he found is the clubhouse on Monument Street. All the townhomes have between three to eight stairs that lead into their entrances. Crawford points out that the construction not only affects the permanently disabled.

"We live in an aging society. Very few of us grow old and stay completely able-bodied as we age," he said.

Chartre built the first phases of Helm Place affordable housing with Section 42 federal tax credits, allocated through the Mississippi Home Corporation. But two-, three- and four-story townhouses without elevators are exempt from the Fair Housing Act requirement, which would have required Chartre to build their homes with seven accessibility requirements that Crawford calls modest—at best.

Still, Crawford said that even the Fair Housing Act requirements are a "far cry from best practice."

For example, structures subject to the act must have reinforced walls for grab bars in bathrooms—but are not required to have the actual grab bars or a fully accessible bathroom at all.

Ultimately, Crawford said not having accessible housing is a short-sighted housing strategy. "These people are going to age, and when they age, they're not going to want to move," Crawford said. "The whole point (is) that this is such an ideal location for people who want to work in Jackson, and they've excluded a whole section of the population."

Clarification: This story has been updated to show that Chartre Companies LLC won the bidding process for the eight parcels of property on Cohea Street--the city did not just give Chartre the properties voluntarily. We apologize for the lack of clarity or any confusion. Email state reporter Arielle Dreher at [email protected]