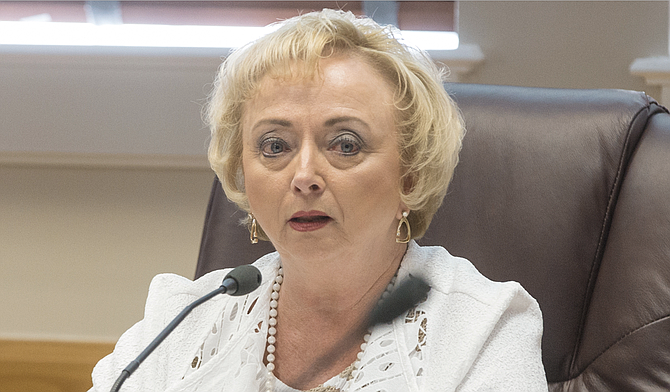 State Superintendent Carey Wright said she wants the statewide student testing task force to look at both state and district testing across all 144 school districts. Photo by Imani Khayyam.

JACKSON — Mississippi Superintendent Carey Wright announced a task force this week to study how individual school district and the Department of Education in the state are testing students.

At the Mississippi Board of Education meeting on Thursday, Wright said all stakeholders, including parents, teachers, principals and possibly students, will be on the task force, which should kick off in June. "We are going to be looking at state testing writ large in the state," Wright told the board Thursday. "... What are all 144 districts doing? What are districts requiring versus what (is) the state requiring? What's the quality of the assessments?"

MDE requires certain state testing that students are currently taking, but districts are allowed to test students more than the state requires with other exams. She said she wants the task force to bring forward recommendations before the 2019 legislative session. Both education chairmen in the Legislature, Sen. Gray Tollison, R-Oxford, and Rep. Richard Bennett, R-Long Beach, will serve on the task force.

Mississippi First, an education advocacy organization that supports charter schools among other reforms, published a study this year that looked at how four school districts in the state tested their students. Researchers found that while students spend little time taking statewide tests, district testing varied vastly. Lower-performing school districts administered more tests to their students than the higher-performing districts the group studied.

Beyond discovering how Mississippi students are tested throughout the state, the task force will recommend best practices to districts as well as consider Mississippi First's recommendation.