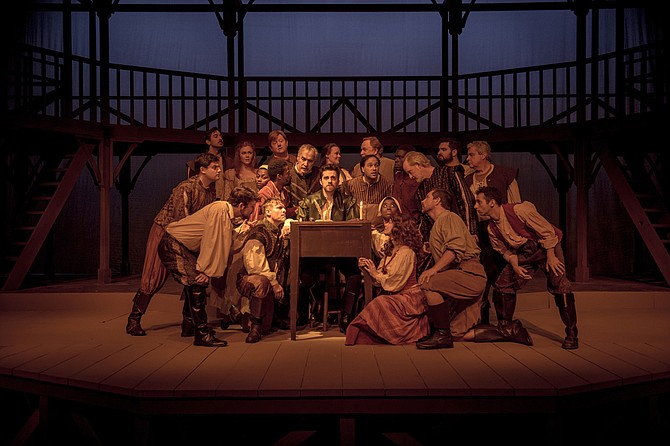 A couple of weeks before New Stage Theatre begins its latest production, "Shakespeare in Love," the rehearsal area is marked with tape, noting places on the stage such as the balcony, the tavern and The Rose Theatre.

The cast is rehearsing a scene from act one of the play.

"My lady! My lady!" the nurse, whom actress Sharon Miles plays, yells in distress as she runs to actress Betsy Helmer, who is portraying Viola de Lesseps, sitting on a bed at center stage. "My lady, what's the matter?"

De Lesseps lays her head on the nurse's shoulder and responds in grief, "Just leave me, Nursey!"

A second later, a shout arises from stage right: "Viola!" Actor Kyle Daniels arrives onstage as the repulsive Lord Wessex. His presence reminds de Lesseps of three things: She is duty-bound to marry the villainous aristocrat; Wessex is the only thing keeping her from her true love—one of the greatest writers of all time, William Shakespeare; and she is also reminded of her status in society as the daughter of a wealthy merchant.

"Shakespeare in Love" is based on the Academy Award-winning 1998 film of the same name. Lee Hall adapted the movie for the stage in 2014, and it made its U.S. debut at the Oregon Shakespeare Festival in February 2017.

While a Shakespeare classic is at the core of the story, "Shakespeare in Love" tells a tale of its own, following the legendary playwright's journey through love, heartbreak and the world of theater.

New Stage Artistic Director Francine Thomas Reynolds, who is directing the play, says she likes for the company to do a comedy each season. "Shakespeare in Love" had just become available, so she decided it would be part of this season at New stage.

"It's about theater, and it's just really fun," she says.

The production is like a tribute to actors and artists in the theater, she says, because it is essentially a play within a play, as the plot of revolves around Shakespeare creating "Romeo and Juliet."

In "Shakespeare in Love," the titular playwright, whom actor Hunter Hoffman portrays, is a poor artist working for Philip Henslowe, who owns The Rose Theatre. He is working on a new comedy, at first titled "Romeo and Ethel, the Pirate's Daughter." When "Shakespeare in Love" begins, he is suffering from writer's block.

After seeing one of Shakespeare's plays, de Lesseps wants to be onstage, but due to gender restrictions in the theater during that time period, she cannot try out. She decides to disguise herself as a man and auditions for "Romeo and Ethel" under the guise of Thomas Kent. Shakespeare ends up casting her as Romeo, and over time, he learns the truth about her, and the couple falls in love.

"It's fun because it makes Shakespeare human, and it puts Will Shakespeare at a young age, imagining where his inspiration came from and stuff like that," Reynolds says.

While "Shakespeare in Love" is fictional, some of the characters are based on people from history. In addition to the famous playwright, the play features characters such as Shakespeare's artistic competitor and best friend in the play, Christopher "Kit" Marlowe. In New Stage's production, actor Drew Stark, who is also the dance and fight choreographer, portrays the revered playwright, most known for "Doctor Faustus" and "Tamburlaine the Great."

"We're ... struggling with the same path of trying to be an artist and find work," Stark says.

"It's a fun relationship," Hoffman says. "He always comes in at very specific times where Will is having these life-changing moments and kind of like a voice of reason for Shakespeare in a lot of ways, but also just like an inspiration."

During one scene, Shakespeare and Marlowe sneak into the garden at de Lesseps' estate and listen to her talk about the character Romeo (In the play, this is where "O Romeo, Romeo" comes from). Eventually, Shakespeare appears from the shadows and begins reciting what eventually becomes his Sonnet 18, "Shall I compare thee to a summer's day." At this point, he has not completed the poem, so Marlowe tells him what to say. Shakespeare is eventually able to complete the poem himself.

Stark, who is from Starkville, Miss., graduated from the College of William & Mary in Virginia in 2002 with a bachelor's degree in music. After college, he did a year-long intership at the Playhouse in the Square in Memphis, Tenn. He then moved to New York City to be a member of a dance company. He came back to Mississippi almost four years ago to help his parents and was eventually introduced to New Stage.

During college, he studied fight choreography and received his certification as an actor/combatant from the Society of American Fight Directors in 2002.

Hoffman and Helmer are both currently based out of New York City.

Hoffman attended two-year conservatory Neighborhood Playhouse School of Theatre in New York. Over the years, he has been in numerous productions, including Bassano in a production of "Merchant of Venice," Mercutio in a production of "Romeo and Juliet" and as an understudy for the character Jason in the Broadway play "Sweat." "Shakespeare in Love" is Hoffman's first production with New Stage.

Helmer, an Atlanta native, received a bachelor's degree in theater and performance studies from Georgetown University in Washington, D.C. She has done regional theater across the country, including in Utah and Florida and spent a year with the Alabama Shakespeare Festival. When in New York City, she trains in the Upright Citizen's Brigade Theatre's advanced improv program. Her first role for New Stage was as in the titular character in "Baby Doll."

Helmer says "Shakespeare in Love" may be more accessible to people who are not necessarily fans of Shakepeare's work because it provides snippets of some of his pieces.

"If you love theater, you will definitely love this because there are a lot of references, but you're not going to miss out if you don't get those references because it's so funny," she says. "It's romantic. It has singing and excitement. It really does have a great story, and then it also has some of Shakespeare's best writing in it."

Reynolds says New Stage chose "Shakespeare in Love" in part because it depicts the nature of why people are drawn to the art of theater.

"So many people like to do this kind of thing or want to do it, and this show says why—why people would give up high-paying jobs to do this or go and act in ... (small towns like) Arrow Rock, Missouri," she says.