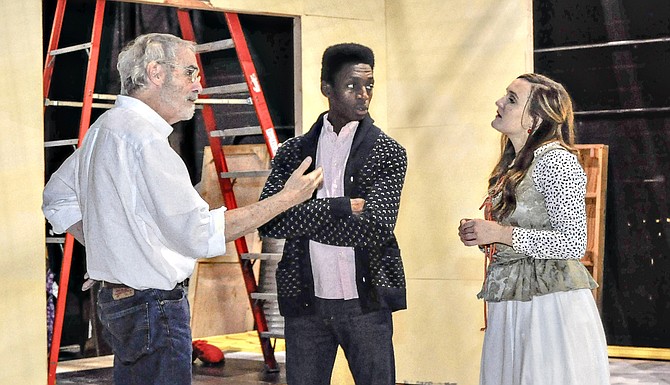 The young actors on the bare stage circle, feint and confront, back away and engage. Stop, start, make notes, begin again. Watch. React. Yes, that. Better. Not this. From the cross. Again.

Blocking a scene is painstaking, detailed work that requires Sarah Harris (as Madame Pernell), Jon Dickson (as Tartuffe), Madison Parrott (as Elmire) and Conner Bingham (as Orgon) to run their lines again and again as director John Maxwell watches and shows them how to match the words with action. Each movement heightens tension or comedy; each vocal inflection adds or detracts from the poetic rhythm and flow.

"I spent all afternoon on this, and I completely changed it," Maxwell tells them about this key scene in "Tartuffe" (often subtitled "The Hypocrite," or "The Imposter"), Moliere's comic masterpiece. The play, first performed 350 years ago in Paris, is a living, breathing thing, and it requires the actors to imbue it with meaningful physicality.

Moliere, the stage name of Jean-Baptiste Poquelin, made a career out of writing plays that poked fun at the ills of the French high bourgeoisie—greed, hypochondria, philandering, pretension. "Tartuffe" takes aim at hypocrisy, gullibility and obsession through the vehicle of religion.

The title character dupes the foolish and wealthy Orgon with a thin veneer of piety, posing as a holy man. Orgon promises Tartuffe his daughter and his fortune before his wife, Elmire, reveals the depth of the deception. On the brink of utter disaster (and characteristic of the plays of the era), Tartuffe is exposed and Orgon's family and fortune restored. "This is about a con man who moves into this house ... and among other things, wants (the owner's) money and house, and wants to seduce his wife under the cloak of religion," Maxwell says, putting the play's themes into perspective.

Maxwell, a staple of Jackson's theater scene, acted in "Tartuffe" at New Stage Theatre "about 300 years ago," he says, and fell in love with the play. Now on the Belhaven staff part time, he's thrilled to be directing this production within his varied career as an author, actor, teacher and director.

Richard Wilbur, 1987 United States poet laureate and two-time Pulitzer Prize winner, translated "Tartuffe" in 1963, mirroring Moliere's original French verse. "It's a real challenge for the cast," Maxwell says, even more than Shakespeare. "How do you make conversation out of rhymed couplets?"   The actors have to make sense of the meaning and not get trapped in the lines' rhythms, he adds.

While the play is seen as a prime example of the playwright's genius, the Catholic Church forced King Louis XIV to ban it until Moliere rewrote the now-lost original ending. What theater goers see today is the revised version, one more palatable to the powerful religious leaders of the day.

"It was pretty scandalous at the time," Maxwell says. "The church wielded so much power. There certainly was very little room for irony or satire as far as the church was concerned. ... In a way, ("Tartuffe") is not a satire of religion or the church. Tartuffe is just a scoundrel."

Moliere also introduced in "Tartuffe" the notion that women could step out of their traditional subservient roles—an idea far ahead of its time—through the character of Dorine, a servant. In fact, it is more likely that the "low-born" characters have common sense in this play.

"Dorine kinds of grounds us all," Maxwell says. "She's saucy, and she's brassy and says things only she can get away with."

But don't let the serious themes dissuade you. "Tartuffe" is full of comedy and wit. The ending is pure fantasy; reality lies in the flawed characters and the political and social satire that come before it. "Really good theater always pushes the envelope. It always does," Maxwell says.