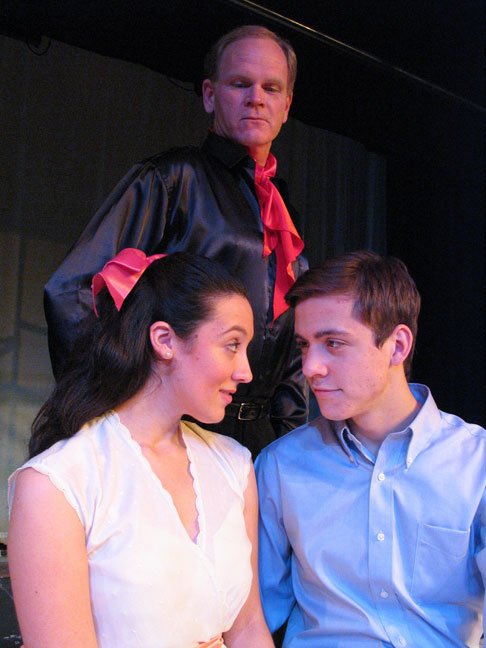 This weekend at New Stage Theatre, a new generation of theater-goers will be initiated into the simple delights of "The Fantasticks," the Old Faithful of musical theater.

Written in 1959, the show's playful blend of romantic fantasy and cynical realism has earned it an unparalleled longevity. "The Fantasticks" first came to New Stage in 1966 and appeared again in 1987. Artistic director Francine Reynolds jokes that the show apparently returns to New Stage every 20 years.

But there is logic to regularly revisiting "The Fantasticks" on a bidecadal cycle. For one thing, the simple story of young love lost and recaptured never grows old. The stock characters of the boy, the girl and the well-meaning but scheming fathers are intentionally stripped of any specific historical context; they seem just as plausible, whether the current president is Bush Jr., Reagan or LBJ. After 40 years, the audience members have changed, and a return viewing allows them to identify with characters they may not have related to previously.

To preserve the show's timeless purity, director Peppy Biddy doesn't introduce any sweeping changes to the production. Instead, Biddy devotes his skills to preserving the play's contextual ambiguity and building an atmosphere that engages the audience in the act of storytelling. The show does not include any breaks for set changes; props appear and backgrounds shift with the help of The Mute, a silentbut constantpresence on the stage. Biddy expertly orchestrates the deft transitions without any rupture or pauses in the action.

"The Fantasticks" is a theater lover's play, an opportunity for viewer and performer to construct their own reality on the stage. Quite literally, the production's scaffolding is left exposed for the players and audience to hang their story upon. The resulting show is a template for each viewer to fill with his or her own experiences and sensibilities.

New Stage brings in another stellar cast, seamlessly integrating local stars and nationally recognized actors. Natchitoches native J. Casey Barrett makes his New Stage debut as the young-but-growing-up-fast Matt. Every audience member who once was or still is a boy entering manhood will identify with Barrett's tentative assertiveness and burgeoning passions.

Matt's true love and the girl next door, Luisa, is played by Frances Bordlee, a Lake Charles native appearing in her second New Stage production. Through Luisa, Bordlee convincingly channels the romantic exuberances of a girl discovering love, who wants nothing more than to swim in clear blue streams and to be kissed upon the eyelids. As she matures, she deals with life's disappointments without ever averting her gaze from the shining moon.

Longtime Jacksonian and New Stage regular Ray McFarland plays the Zorro/Mephistopheles hybrid El Gallo. With his cultivated mischief, McFarland's El Gallo embodies the "sympathetic devil" and orchestrates the necessary heartbreaksfirst an abduction, and then a seduction that drag the young lovers into adulthood and toward a more authentic, mature romance.

The story progresses through the constant ministrations of The Mute, played by Turner Crumbley of Laurel. Turner's graceful, choreographed motions allow the set to evolve smoothly in real time, while his silent participation mirrors the audience's own presence alongside the actors. Musical accompaniment by harpist Amanda Magrum and pianist Harlan Zackery Jr. sets the sentimental and quasi-fairytale mood, which contrasts well with the harsh realities that the characters encounter.

"The Fantasticks" is about youth, becoming an adult and adults taking care of the next generation. Wherever we are in life, we can look back and see ourselves in this story. Ultimately, "The Fanasticks" is about nostalgia. And nostalgia never gets old.