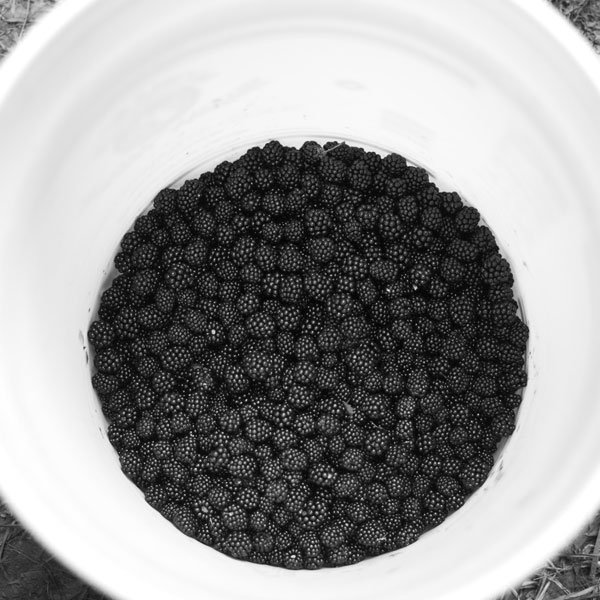 "Blackberries" is one of 22 prints in Roy Adkins' "Ides of the South" exhibit at the Mississippi Arts Center. Photo by Courtesy Roy Adkins

Perhaps the South will rise again someday. Until then, it's a photographer's feast. The region feeds snap-shooters a banquet of melancholy landscapes and crumbling edifices, all drooping under the weight of past grandeur. The plentiful arbors lend instant narrative to any composition. A stately magnolia or two invokes pastoral southern romance, while a scene of brooding southern Gothic flows handily from a little Spanish moss hanging from cypresses.

This month at the Mississippi Arts Center, Jackson photographer Roy Adkins explores these characteristics in his exhibit "Ides of the South." His show of 22 photographs occupies a semi-circle of wall space in the lower atrium. While traveling throughout Mississippi and Alabama, Adkins has trained his Hasselblad on what he calls the "broken and battered relics of the South and the enduring grace of the people who live here."

To explore his subject, he employs a variety of techniques. He photographs in color and black-and-white, on film and digitally. He looks up, down and sideways to capture unique angles, and leaves his shutter open to capture stunning nighttime images.

Adkins zooms his lens in close to discover small, easily overlooked subjects, and pans out again to capture sweeping southern views. The show's first image, a mesmerizing close up of a prosaic bowl of blackberries in Ebenezer, Miss., conjures a depth of textures from the simple fruits. A few frames over, a broad view of an ancient oak towers over a barren expanse in Ridgeland, a rare glimpse of Jackson's northern neighbor with nary a subdivision or mall development in sight.

Despite the variety of subject matter, the exhibit does follow a few specific arcs. The show is partially autobiographical, as Adkins meditates on the images from his own southern upbringing. As a boy, he recalls picking buckets of blackberries at his grandparents' rural farm in Fayette, Ala. Another series of photographs features portraits of abandoned automobiles gradually receding into the earth. Roy's father, an avid car restorer and tinkerer, always kept a few rusted hulks in the backyard.

Another series of photos features well-known Jackson landmarks, some shown in classic poses with others shot from inventive angles. Roy eloquently captures the Sun-N-Sand motel's current state of preservation-limbo by framing the building's ebullient Vegas-style sign through strands of barbed wire that cordon off the site. Other iconic images include the Capitol building, the Streamline Moderne Naval Reserve Center and assorted fairground structures.

Adkins is at his best when investigating the interplay of nature and man-made structures, ceding primacy to neither while emphasizing their intertwined mortal fates. In perhaps the exhibit's most striking piece, a dilapidated wooden home the color of driftwood shares its demise with a sere, sapless and barren tree, vast in proportions but short on life.

In another photograph, a darkened cross atop a church in Greenwood vies with a stormy sky in an ominous clash. A few photos later, a plain boxy brick house of worship in Rocky Springs shares an early morning streetlight with the surrounding trees. Illumination spreads all around; neither the trees nor the church owns this light, and it doesn't matter.

What tidings are born in the "Ides of the South"? Perhaps the signposts of gradual decline point toward a final moonscape comparable to the ruins of Carthage. Or maybe a rebirth is in the offing, and gleaming, sterile Atlantan skyscrapers will soon take root in the shifting clay. The show closes with a serene evening view of downtown Jackson. The buildings, while a bit dumpy, are still standing. Above, the sky glows a deep blue. Even the King Edward Hotel looks respectable in the proper light. Through Adkins' photographs, we realize that there's no need for unwarranted optimism nor despair. In the twilight between riches and ruin, a new reality takes hold.

"Ides of the South" can be viewed in the lower atrium of the Mississippi Arts Center through Aug. 17. Call 601-960-1500 for more information.

I love that "Blackberries" photograph. And Ari, that's a helluva first paragraph.