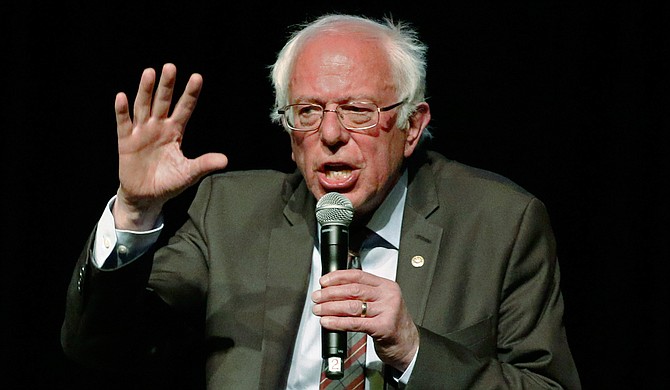 At the town-hall conversation between Sen. Bernie Sanders and Mayor Chokwe Antar Lumumba commemorating Martin Luther King Jr. on April 4, Sanders only spoke to national reporters who wrote stories about how he struggles with the African American vote. Photo courtesy AP/Rogelio V. Solis

JACKSON — U.S. Sen. Bernie Sanders traveled from one predominantly black city to the next on Wednesday for public appearances in commemoration of the 50-year anniversary of Martin Luther King Jr.'s assassination.

While Sanders headed deeper into the South, local reporters were told they must arrive earlier to the town-hall conversation between Sanders and Mayor Chokwe Antar Lumumba in Thalia Mara Hall than any logical person would show up for a flight. The call time for reporters was between 3:30 p.m. and 4:30 p.m., and doors were not supposed to open to the public until 6 p.m., although many eager Sanders supporters arrived far earlier.

The City also told local reporters that they could not leave after checking in without waiting in expected long lines for the public, which did not materialize. It also did not provide refreshments, including bottles of water, for what was a required hours-long sojourn to wait for the event.

Most of the local reporters obliged, meeting the City's communication manager, Kai Williams, in the muggy mezzanine before the event. Williams said earlier in a press release that local reporters could do interviews with the two headliners on that balcony following the program and told local reporters in person Wednesday that Sanders and the mayor would likely talk to each outlet individually.

Williams walked that back later saying the pair might talk to local media in a gaggle. Nevertheless, Williams confirmed that the senator and the mayor would be available for questions following the town hall.

But, neither of the two men would show up—nor did Williams.

Forced onto the Mezzanine

As the hour-long conversation, starting at 7 p.m. and focusing largely on Sanders' campaign points and Mayor Lumumba's familiar talking points about cooperatives and how "crime pays very well" came to a close, it became clear that the City was reneging on its promises to the very local journalists who spend late nights reporting on marathon Jackson City Council meetings, people's assemblies and last-minute press conferences.

As a group of local reporters looked down from the mezzanine at the slowly dispersing audience, with some folks getting autographs from the mayor, a select group from the audience was invited to slip backstage to engage with Sanders, including the program hosts and some members of the Mayor's Millennial Round Table. Among the people invited backstage were members of the national press who got time to interview Sanders.

BuzzFeed sent Ruby Cramer to cover the event, and her tweet from the event quoting Sanders' comments on President Barack Obama stirred up divisions across the country.

"The business model if you like of the Democratic Party for the last 15 years or so has been a failure," Sanders said Wednesday. "Now what happened, people sometimes don't see that because there was a charismatic individual named Barack Obama who won the presidency in 2008 and 2012.

"He was obviously an extraordinary candidate, brilliant guy. But, behind that reality, over the last 10 years Democrats have lost about 1,000 seats in state legislatures all across this country."

Cramer was one of the reporters who went backstage, as she mentions in her article "Bernie Sanders' Revolution Needs Black Voters To Win. But Can He Talk To Them?" about the town hall and how Sanders has sometimes engaged with black people in a tone-deaf manner.

As local reporters waited on the mezzanine, a New York Times reporter also got an interview backstage for his piece "Bernie Sanders Courts Black Voters Anew. But an Obama Reference Stings," in which he included that Sanders "wound down over a plate of wings at a late-night dinner with Chokwe Antar Lumumba" after the town hall. Jonathan Martin of the Times pointed out that Sanders did not mention any of his civil-rights activism as a college student during the talk meant to honor King's legacy.

A national Associated Press politics reporter also got an interview with Sanders before the Lumumba event, and his piece also highlights Sanders' struggle with black voters.

Press Told to Leave by JPD

A handful of the local reporters and a local freelancer for a national magazine stuck around to get a moment with Sanders and tried to enter a backstage room with the mayor's name on the door. But the City's communications manager, Kai Williams, abruptly turned this reporter away, saying that only "select" media were allowed there, making it clear that it was a private gathering. To be clear, at that point neither the senator nor the mayor were in the room.

Williams insisted that the group return and wait upstairs on the abandoned balcony for interviews that she would never arrange, offering no clarification as to why she shunned local media that evening.

A Sanders staffer allowed two journalists from JSU-TV at Jackson State University, whom the staffer referred to as "student journalists," to speak with the senator. But when this reporter, with three to four other local reporters in tow, waited outside that door to be next in line to speak with Sanders, a plain-clothes Jackson Police Department officer told us we could not stand there and had to wait elsewhere.

In his home state, Sanders has a reputation of tossing local media aside in favor of national reporters. As John Walters at Seven Days Vermont reported in 2017, Sanders keeps local media in his home state at bay. At the time Walter's piece, "The Media Bern: Sanders Keeps Vermont Press at Arm's Length," went to press, it had been 692 days since Sanders had spoken to anyone at Seven Days, which is based in Burlington, the last time being the day he announced his run for president in 2015.

Here in Jackson, with Mayor Lumumba attracting a flurry of national media interested in his "radical" politics and family history, his administration also has a pattern of prioritizing his time with national media and declining interviews with local media during the same time span. In October 2017, the Jackson Free Press pursued the mayor for a short interview for an examination of the Jackson Zoo's challenges that could lead to it announcing it was moving out of west Jackson.

Then, Williams pointedly said she could not "grant" the JFP the short interview, not mentioning that a Nation reporter was in town to do a profile of Lumumba. The JFP learned about that interview after its author called editor Donna Ladd for help with questions. After the editor intervened, Lumumba eventually called and talked about the zoo for the article.

The City could make no one available last week to address the news that the zoo is indeed moving, either, not returning calls to talk about the zoo's move, which Lumumba had said earlier that he was fighting to keep from happening.

Lumumba also told the JFP editor weeks ago that he would not be available the first week of April for a public conversation about plans to circumvent youth crime because he would be on paternity leave and not working. In March, another Nation piece emerged about his supposed efforts to reform the local criminal-justice system. Locally, much coverage on that topic has focused on a spate of police-involved shootings and the City's refusal to identify the officers, as well as on the Jackson Police Department working with the feds on Attorney General Jeff Sessions' controversial "Project Eject."

Last week the Jackson Free Press learned, though, that Lumumba was apparently cutting paternity leave short to be part of a publicly streamed conversation at the Mississippi Civil Rights Museum featuring NBC News executive Andy Lack and former network anchor Tom Brokaw this week—the same week he declined the discussion about youth crime. An editor of the Lack-founded website Mississippi Today told other media, including this outlet, that other media could not report on the discussion with Lack and Brokaw, even though it was beamed out publicly.

And, of course, media also learned last week that Lumumba was hosting the town-hall meeting with Bernie Sanders this week, where local media ended up being treated disrespectfully.

After learning about Williams' treatment of this reporter after the Sanders event, Lumumba called later that evening and apologized to this reporter, as he has done previously.

Treatment of local reporters as second-rate stepchildren keeps journalists from their jobs in reporting back to the people of Jackson on vital local issues that affect everyday lives. This outlet believes strongly that local people's right to know should matter far more than a national media blurb, many of which this time around barely even included our mayor.