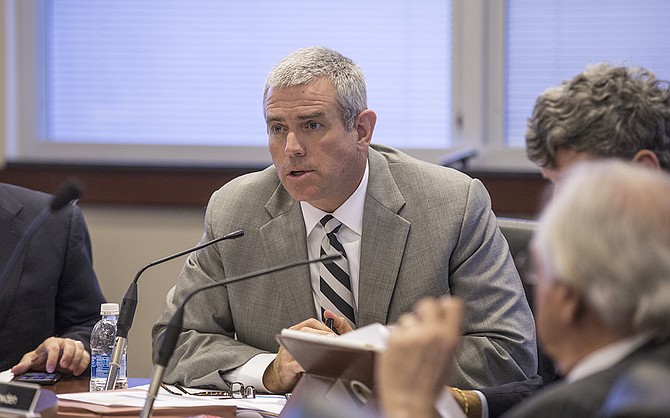 House Speaker Philip Gunn, R-Clinton, said lawmakers will have to remain cautious going forward with the state's slow-growing economy as almost every State of Mississippi department asked for more funding for fiscal-year 2019. Photo by Imani Khayyam.

JACKSON — From public safety to education, several large state agencies asked top lawmakers for more funding last week. Based on the State of Mississippi's economic outlook, however, more funding does not seem to be in sight.

"The state has struggled to gain momentum since the recession in 2008," Webb told lawmakers at the Woolfolk building last week. "It seems like we're taking one step forward and then two steps back."

Webb said Mississippi "lackluster performance" since the national recession in 2008 is undeniable, especially when you compare the state's gross domestic product and employment growth to national levels. The total GDP growth since 2008 is 1.7 percent, while it is 15.9 percent nationally, Webb said. Employment gains in the state are more than 5 percent, but nationally those gains are more than 11 percent.

House Speaker Philip Gunn, R-Clinton, said this current year's budget is based on no growth estimates and that he expects the same for the fiscal-year 2019 budget, too.

"Based on what Darrin Webb said yesterday, we're just going to have to remain very cautious," he told reporters on Sept. 22 after the budget hearings.

The Joint Legislative Budget Committee will meet again in November and then adopt its budget recommendations for fiscal-year 2019 in December, but Gunn emphasized how far ahead—a year and a half—lawmakers were trying to project the budget.

"It's just incredibly hard for any of these experts to predict what is the revenue going to be in March of '19...," Gunn said. "We will have much more accurate information come March of next year."

Eleven of the state's agencies presented their budget requests to the Joint Legislative Budget Committee, with the majority of them asking for more funding. Leaders of the state's K-12 education system, community colleges and public universities all requested more money last week.

The Department of Mental Health stood out, however, when Executive Director Diana Mikula requested level funding—the same amount of funds the agency received last year—in a shift from the agency's previous cries for more financial support in recent years.

After Mikula's less than five-minute presentation last Friday, no lawmakers asked her questions, despite the fact that the department is still embroiled in a federal lawsuit for not providing enough community-based services.

Gunn said DMH can accomplish its mission within the dollars it has, based on the department's request.

"It certainly (is) interesting that they are telling us now that they are able to accomplish their mission within the existing dollars," he said. "I am pleased with that."