The JFP at 15: Raising Hell, Having Fun 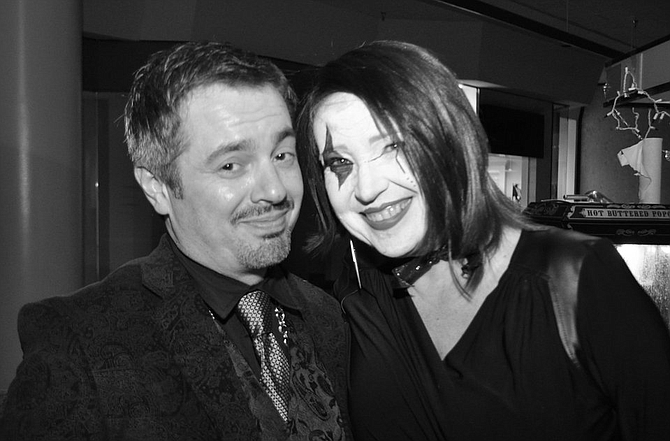 JFP co-founders Todd Stauffer and Donna Ladd hosted the "Night Circus" Best of Jackson party at the the Metrocenter Mall's center court in January 2003. It's her favorite of many great BOJ parties. Photo by Trip Burns.

The Jackson Free Press' official birthday is Sept. 22, my late badass mother's birthday. She was illiterate, but loved to tell stories and encouraged me to say whatever I needed to say—so it was only appropriate to start the JFP on the day she would have turned 78.

I didn't move home in 2001 to start a paper. It was three months before 9/11; Todd and I had tons of freelance work; I had a fellowship about unequal treatment of young people of color; and I wanted to write a book. Mississippi was a cheap home base. Plus, I had visited Jackson while on spring break from Columbia to research my master's project, and had met the great and inspiring Dick Molpus. He had stayed all this time in Mississippi, he told me, to "fight the worthy scrap" for his home state.

Suddenly, after 18 years in exile, I wanted to fight that scrap, too. We arrived two months after Mississippians voted to keep that damn flag flying, and after 9/11 decided to finally put down roots. All the while, I met people from all over Jackson who didn't know each other, and I wanted them all to have a progressive meeting of the minds—a forum for ideas not often shared here. Big thinking. Optimism. Tough love. Hope. Love of Jackson. Real history. Evidence-based solutions.

Because I had a background in "alternative" media, I started talking about starting a paper—kidding, really, because it was hard even then before Facebook and Google took over the world. But it was almost mystical—it was a train we couldn't manage to avoid. So we jumped on and published our preview issue on Katie Mae's birthday, 2002. Here is a sampling of my most vivid memories of the last 15 years.

Stephen Barnette telling us "I'll sell ads" after months of us talking about how Jackson needed a real, diverse, locally owned newspaper.

Our visiting journalist friend Amy Haimerl reading a passage out loud about the Civil Rights Movement newspaper, the Mississippi Free Press, and us immediately knowing the name of this one.

After working all night on the issue facing a JFP interview with then-lieutenant governor candidate Barbara Blackmon, the power went out at 6 a.m. before the PDFs were shipped (we were poor). Stephen disappeared defiantly, and the power suddenly came back on. "Send 'em," he said of the PDFs. He wasn't playing.

Todd not sleeping after the fifth issue with Trent Lott wearing a rebel-flag tie on the cover, and then the Iraq War myths cover the week Bush started that bad war. Todd didn't know if our young paper could survive it and had put every penny he had into this paper. But he didn't stop us, and we're still here thanks pretty much solely to him. He soon adopted our motto: "Do the right thing and wait.

The woman in the elevator at the Mississippi Capitol telling me she wanted to "hug your neck" for publishing "positive" stuff about young people in Jackson.

When Miss S, the tail-less cat in our first office in a one-bedroom apartment close to La Cazuela on Fortification, would sleep on Stephen's printer because it was warm. And how she would fall on the floor with utter love when secret sportswriter Dr. S showed up in the office.

Assistant Editor Casey Parks and her girlfriend sleeping on the floor of the JFP in Fondren in the aftermath of Katrina because we had power. Casey got up and went to report on people staying at the Mississippi Coliseum.

The day Casey learned she won the change to go to Africa with Nick Kristof.

That time large Czech photographer Jaro Vacek stepped into the garage of the first "office" when a man was harassing me and watching it all suddenly stop.

The morning the great Bob Moses summonsed me to Lanier High School to talk to young people about media coverage of young people after The Clarion-Ledger ran a large page-one photo of one of them with a story about kids failing tests. That student had done well on the test and was so upset that his mother had bought up all the Ledgers in their neighborhood so people wouldn't see it. (This was really the day the Youth Media Project was born, at least in my head.)

Interviewing Batman in a studio behind a house in west Jackson with photographer Renee Reedy.

Watching reporter Adam Lynch catch mice at our Fondren office with his hands, put them into a bucket and take to a part—after the little critters terrorized our feet.

Listening to editor Brian Johnson scream "Shut up, Deuce!" constantly to the yowling cat I used to bring to the office in a carrier every day. (That cat now stays at home in our no-pet downtown office.)

The week we went weekly on the 50th anniversary of Brown v. Board of Education with a collage of old racist newspaper clippings by artist Anthony DiFatta on the cover. Most headlines were from the old Clarion-Ledger and Jackson Daily News.

A certain out-of-state road trip someone dubbed the Tubman Tour as we looked for truths that I may tell y'all about in my book someday. Maybe.

The day photographer Kate Medley and I learned that former Klansman James Ford Seale was still alive in Roxie, Miss. And the next night when Charles Moore, whose brother Seale helped kill in 1964, shared a can of boiled peanuts with us standing on a dirt road telling us he never thought two white Mississippi women would do such a thing.

Going to Roxie, Miss., with a CNN crew and photographer Kate Medley to visit Charles Moore's grave the day the State of Mississippi indicted James Ford Seale. (And I was sick as a dog.)

Listening as James Ford Seale's defense attorneys (one a friend) unsuccessfully fought to keep my work out of the trial.

Sitting at a newspaper conference in San Francisco the day the jury convicted James Ford Seale, getting a call that he was guilty, shouting it out, and everyone cheering for our work.

Hearing that DA Faye Peterson was ordering that the young men leave Frank Melton's house after his arrest. He was never a certified foster parent and was often drunk around those young people.

The day The Clarion-Ledger quietly picked up all its TDN boxes after the JFP and other local publications banded together to stop their corporate takeover of our distribution spots.

Every single one of the JFP Chick Balls (hopefully returning soon).

The day we moved on up into the 13th floor of Capital Towers downtown and no longer had to go to the bathroom outside and down the hall as we did in our crumbling building in Fondren.

Meeting Columbia j-school grad Arielle Dreher repeatedly in New York City before inviting her to join the JFP Nation as our state reporter in Mississippi.

All those Sunday-night Best of Jackson parties over the years, but especially the 2013 "Night Circus" extravaganza in the center court of Metrocenter Mall. I'll never forget the smiles from the Cathead Vodka guys when I told them they could set up their bar in the old Victoria's Secret, or the look on Mayor Harvey Johnson Jr.'s face when he realized we had a burlesque act as the surprise entertainment.

The teenage daughter of Alisa Price showing up last summer for the Mississippi Youth Media Project. Darryn was a baby when Alisa moved from the Planet Weekly in 2002 to join Stephen to sell ads for us. Time does fly when you're raising hell.

Watch this space hashtag #jfp15 on Twitter, where I'm @donnerkay. I'm likely to add more as they come to mind.