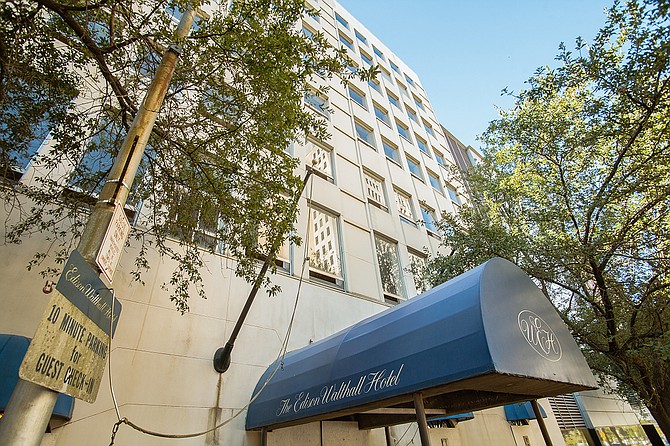 Developers of the Edison Walthall Building have cleared and cleaned the inside of the 1920s era hotel and plan to start new construction this month. Photo by Stephen Wilson

JACKSON — The Edison Walthall Hotel is the place of legends, bar fights between powerful men and lots of stories its walls could tell, but it has sat empty now since it closed in 2010.

The hotel, named for a Confederate general and Mississippi senator, Edward Cary Walthall, that sits atop a city creek in downtown Jackson may live again soon, however. Construction on the building and parking structure will begin this month, after the Jackson City Council passed an ordinance Oct. 10 allowing the developers to avoid elevating the parking structure by 18 inches in accordance with floodplain code.

They can now "dry floodproof" the building instead.

Harris Building Solutions LLC, the designer on the project, in concert with the general contractor, Construction Equity LLC, plans to start new construction this month, Aaron Harris told the Jackson Free Press. The project includes 155 loft apartments on the second through eighth floors of the hotel, with Harris and Construction Equity LLC converting former hotel rooms into one-bedroom studio apartments.

Harris plans to keep the existing parking garage as well as have amenities on-site for tenants.

The first floor will be open to the public an attempt to return the Walthall to its previous, more lustrous days when Jackson bartender Cotton Baronich was the man who probably knew the Capitol Gang's secrets and where all the bodies are buried.

"Basically, there will be a new restaurant in the future and a bar in the future, as there was previously," Harris said. Developers have not yet named the operators and names of the restaurant and bar.

New construction will begin immediately once the building permit is in place. The designer and contractor have been cleaning out the building under a previous permit for the last month, Harris said, and sub-contractors on the project are locked in. 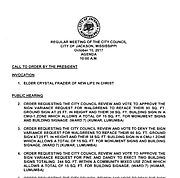 The Edison Walthall property, on the corner of Capitol and Lamar streets, sits on top of Town Creek, along with several blocks of downtown Jackson. The creek, which stretches into northwest Jackson, flows underground next to F. Jones Corner on Farish Street and on the surface by Court Street, where it then stays above ground as it winds its way to meet the Pearl River.

Downtown Jackson buildings located in the floodplain of the creek are required to elevate or "dry floodproof" their structures in the event of a 1-percent chance flood hazard, also called a 100-year flood zone.

Dry floodproofing, city code says, is a combination of structural and nonstructural additions, changes or adjustments to structures, which reduce or eliminate flood damages to real estate or improved real estate property, water, and sanitary facilities, structures and their contents.

The Jackson City Council approved the developer's plan to dry floodproof the first floor of the Walthall parking structure for two reasons, the memo from the city planning office shows. First, the City decided the parking garage, which is structurally independent of the hotel, has enough pedestrian connections between the main hotel and the garage to allow for evacuations of residents on the fifth, sixth and seventh floors. Secondly, elevating the Edison Walthall would eliminate the building's historic designation. The Walthall, known previously as the Downtowner Hotel, was added to the National Register of Historic Places in 2014.

"If the structure were to be elevated to 18 inches above base flood elevation, the structure may no longer be considered eligible for listing in the National Register of Historic Places," a letter from Mississippi Department of Archives and History says.

Mukesh Kumar, the director of the Jackson planning and development department, said all development or significant renovations of structures located in the flood plain must show how they are going to address and mitigate flooding. In the Easter Flood of 1979, several downtown businesses suffered serious damage when water levels rose and lapped at their storefronts. Kumar said the flood risk for businesses that sit on top of Town Creek would likely come from overflow of the creek.

Development of the 1920s-era Walthall Hotel has stalled for years, but now progress seems possible. The main developer, 225 East Capitol Hotel LLC, lists Amit Goel as its manager in business records filed with the state. The address on file for the LLC is based in Houston, Texas, and connected to Evercore Companies. Goel did not return repeated requests for comment. Goel is also listed as the manager for the general contractor on the project, Construction Equity LLC, business records filed with the Secretary of State show. Late last week both of Goel's LLCs had not filed their annual reports and were subject to dissolvement by December.

After the Jackson Free Press inquired about the reports, both LLCs filed their annual reports late in the day on Monday, Oct. 16. Both LLCs are in good standing.