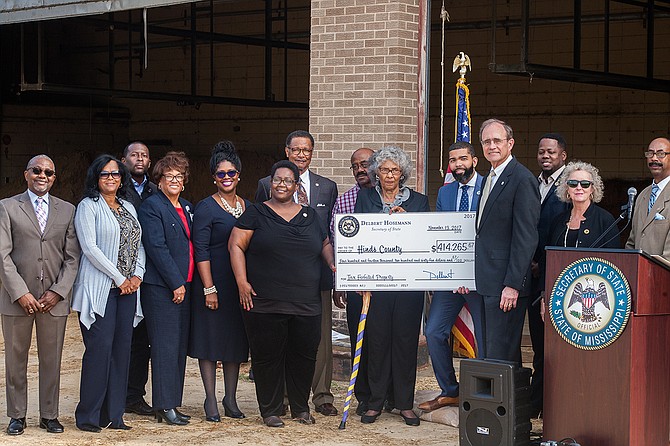 JACKSON — The City of Jackson along with Jackson Public Schools and the other school districts and cities in Hinds County will receive an influx of funds after Secretary of State Delbert Hosemann recovered $414,265 from sales of tax-forfeited properties in the city and county since July 1, 2017.

When people do not pay taxes on their property, those parcels forfeit to the state. Hosemann said the number of parcels of state-owned property in the city has declined due to auctions since he took office. Now about 2,000 state-owned properties are for sale in the Jackson and around 150 in the county, he said.

"When they hired me to be secretary of state, that number (of parcels in the city) was over 3,000, approaching 4,000," Hosemann said Monday at a press conference on the grounds of one parcel that sold off of Highway 80. "We have reduced it down to 2,000 parcels left, and I think that's indicative of a lot of work our staff did."

Jackson Public Schools will receive around $157,000 of the $414,265, Hosemann said. Property taxes, called ad-valorem taxes, directly affect local funding of public schools. State tax sales are held online in auctions, and Hosemann said Mississippi is only one of a few states to make that service available.

Mayor Chokwe A. Lumumba said the tax sales will help increase and encourage local economic development in Jackson. "There's no reason that Highway 80 can't look like Lakeland Drive, so this is about developing all of Jackson," he said at the press conference.

Infrastructure is a significant hurdle to cross for city officials when pushing economic development. Lumumba said he plans to address the city's infrastructure problems by developing a strategy across the city and having conversations with the 1 Percent Sales Tax Commission, set up to oversee how Jackson spends the extra sales tax that citizens voted in January 2014 to set aside for infrastructure needs.

"These are the conversations we are having with the 1 Percent Commission consistently every month, understanding that we have a $2.5 billion infrastructure problem, but we only receive about $13 million annually and a 1 percent sales tax," Lumumba told reporters Monday. "So it's looking at how we leverage those funds to do more work up front and in that way turning our crumbling infrastructure into an economic frontier."

The mayor said he is thankful for the increase in funding from tax sales for Jackson Public Schools, which he said are in dire need of more resources.

"As we look across the spectrum, not only locally but nationally, where you see increased investment in education, you see better output," Lumumba said.