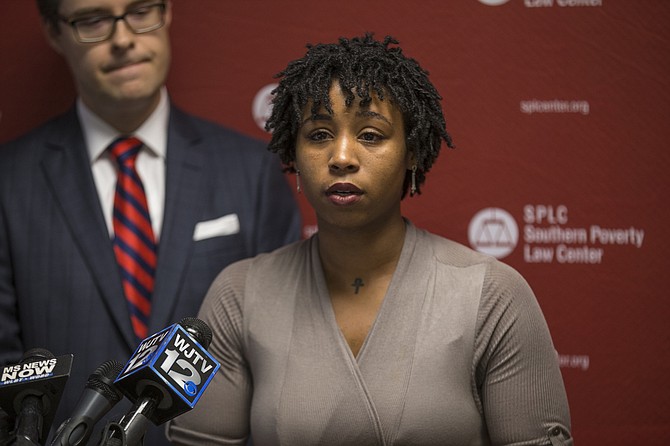 Indigo Williams, one of four mothers suing Mississippi over their children's education, said her son should not have access to fewer resources at Raines Elementary in Jackson then he had at Madison Station Elementary. Photo by Imani Khayyam.

JACKSON — Four mothers with children in majority-black school districts and schools rated "D" or "F" are accusing the State of Mississippi of violating federal law requiring a "uniform system of free public schools." The State passed the Readmission Act back when the U.S. Congress re-admitted Mississippi into the United States after the Civil War and slavery ended.

The Southern Poverty Law Center filed a lawsuit this week on the families' behalf, saying the State still is not ensuring equal access to a quality education at all its schools nearly 150 years after the end of slavery.

"Mississippi's readmission (to the U.S.) required it to maintain a 'uniform system of free public schools,' a commitment enshrined in the state's 1868 Constitution intended to ensure that the former slaves of school age and their descendants would receive an education equal to that received by white students," the complaint says.

The Mississippi Legislature has changed its constitutional provision that aligned to Congress' Readmission standards multiple times since 1868, leaving the mandate for public education to read: "The Legislature shall, by general law, provide for the establishment, maintenance and support of free public schools upon such conditions and limitations as the Legislature may prescribe."

Will Bardwell, senior attorney at the Southern Poverty Law Center, said this constitutional mandate is "a shell of its former self that leaves children with virtually no legal guarantees to public education." The complaint asks the federal district court to declare that Mississippi has failed to live up to the requirements set forth in the Readmission Act, specifically to provide a "uniform system of free public schools."

Indigo Williams, a mother of three, said her oldest child went to Madison Station Elementary for a year before starting at Raines Elementary in Jackson Public Schools. She described the difference in the superior facilities, teachers and extracurricular activities made available to her son in Madison over what is available to him a few miles away in Jackson.

"He does not have any of these resources at Raines—this sends a horrible message to my son that the type of education he gets depends on the color of his skin and the race of the other children in his school. W hat a horrible lesson to teach a 6-year-old," Williams told reporters at the SPLC law offices Tuesday. "... The state has the obligation to make the schools that black kids attend equal to the schools that white kids attend."

Bardwell said the lawsuit is less about funding and more about the quality of education across all schools, not just a select few. He said uniformity does not mean mixing races in schools necessarily but instead providing the same opportunities to kids regardless of where they attend school.

"In this case, we have two plaintiffs that attend failing schools within just a few miles of one of the best elementary schools in the state," Bardwell said. "My clients' schools are vastly majority black; Madison Station is mostly white. That is not a uniform system of schools."

Bardwell said you can measure uniformity by looking at proficiency ratings at schools. He said 4 percent of Raines Elementary students are proficient in math, while 70 percent of students at Madison Station are proficient at math. Those disparities, he said, show that the school system is far from uniform. The state's 19 failing school districts are majority black, Mississippi Department of Education data shows.

The lawsuit does not ask the state to provide more funding or anything specific beyond asking the U.S. District Court to declare that Section 201 of Mississippi's Constitution violates the Readmission Act standards set for public education in the state.

"We're not putting the cart before the horse here," Bardwell said. "The first thing we think we have to do is confirm that these are, in fact, the legal obligations that bind the state. Once we get to that point, the law presumes that state officials will follow their legal obligations, so I have to assume that they will."