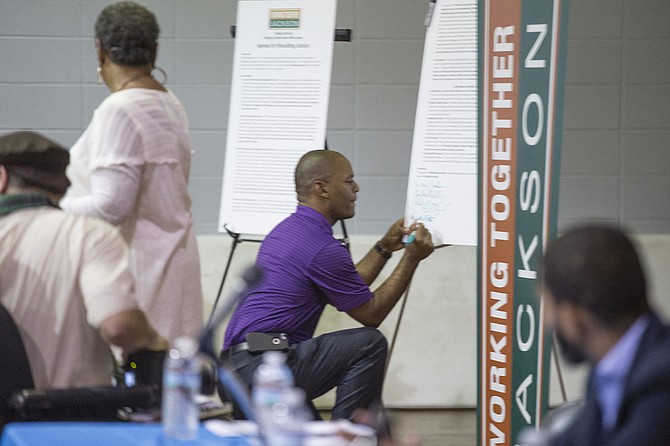 Ward 4 Councilman De’Keither Stamps signs the accountability board at the Working Together Jackson assembly Emmanuel Missionary Baptist Church in south Jackson. Stamps is unopposed for the June 6 general election. Photo by Imani Khayyam.

Working Together Jackson, a coalition of faith-based and nonprofit organizations, hosted the forum called "The Rebuilding Jackson Accountability and Get Out the Vote Assembly." WTJ has a history of meeting with mayoral and city council candidates to ask them to, if elected, publicly pledge to hold themselves accountable in helping rebuild the capital city and meet regularly with WTJ to find solutions to city issues.

Lumumba and the council members and candidates who showed up pledged to address city infrastructure, access to fresh foods, blight and dilapidated housing. Several Jacksonians explained their personal experiences with these issues.

Views from the Streets

Mary Jackson, a member of St. Mark's Episcopal Church near Jackson State University, shared that she was asked to pay $2,800 for damaging her tires, although she has road-hazard insurance. "I am a frequent traveler of Mill Street here in Jackson, and I thought I had become an expert at dodging those potholes," Jackson said.

"But I came down one day just two or three months ago, and for every two that I missed, I hit two others."

She added that "the devil is in the fine print," with the dealership refusing to allow her insurance to cover all the costs due to the tires being damaged but not punctured. She ended up paying $1,000 for tire damages.

Mary Jackson, a member of St. Mark’s Episcopal Church, has experienced infrastructure problems in Jackson that damaged her tires. She shared her experiences at the Working Together Jackson forum last week.

Scott Crawford, who uses a wheelchair and often speaks out about Jackson's failure to comply with Americans with Disabilities Act, then discussed the JATRAN bus system's lack of adequate funding.

"Nothing happens in my world without transportation," Crawford said. "For decades now our community bus service, JATRAN, has slowly declined due to under funding by the city. You may not ride the bus, but I can assure you people you depend on do."

In September 2008, Crawford and other members of what he called the "disabilities community" sued the City of Jackson to enforce the ADA. After two years, they managed to get a consent decree that only lasted three years—which is now obsolete.

"We need to invest in our transportation infrastructure like our economy depends upon it, because it does," Crawford said, followed by applause.

He closed by saying that Jackson needs a continuous bus replacement program and to build complete streets that are safe for all people.

As far as infrastructure needs, Lumumba plans to enforce his father's 1-percent-sales-tax plan, he says, using it for "leverage."

In an interview, the Republican candidate for Jackson mayor, Jason Wells, stated that he is willing to give up $60,000 of his salary to help fix the infrastructure in Jackson.

'Not Safe for our Children'

Mario Hardy said his family has lived in a total of three homes in the past two years, struggling to find affordable housing options that are both clean and safe. The first home, located in Jackson, was infested with rodents, he said.

"The area was not safe for our children to play outside and the apartment was infested with mice. Every day, not an exaggeration, every day, three to four mice we would kill every single day," Hardy detailed, generating distasteful crowd reactions.

Once the lease expired in 2016, Hardy moved his family to Byram, where the rent was unaffordable but living conditions met his expectations. This year, Hardy was forced to move back to Jackson due to the cost of living, however, and his current home is infested with gnats.

Closing was Walter Bishop, who introduced himself as the uncle of Marquez Schaffer, 22, who was shot this past January near Minerva and Olin streets. Bishop described the area his nephew was killed in as a "haven for all kinds of criminal activities."

"My family and I still have to try to come to grips with what happened to Marquez but not only that, we are still hoping that our city leaders will continue the work to eliminate all those dilapidated houses ... it's not just right there where Marquez was killed, but it's all over the city, and we need to eliminate those situations...," Bishop said.

Following the testimonies from citizens, the members of Working Together Jackson asked Lumumba, the likely mayor after his romp in the Democratic primary of nine candidates, for his support on various topics, including workforce development, education, food access, and blight elimination and homeownership.

In particular, WTJ supports Jackson 500, a collaboration between the group, Hinds Community College and the City of Jackson, to teach Jacksonians "trades" like plumbing and welding. Applicants do not need a GED or diploma to get into the program.

"I will certainly be an ally, and I will certainly help support the development of Jackson 500 and seeing to it that we secure the necessary resources," Lumumba said while responding to Alvin Buckley, a member of the panel. Buckley asked Lumumba if he will work to connect infrastructure jobs and other jobs to the Jackson 500 Partnership.

Dana Larkin, who focused on education, asked Lumumba how will he improve Jackson Public Schools.

"Traditionally, we've seen the role of mayor and administration of the city just simply appoint school-board members and then wash our hands away from the school board," Lumumba said.

"We'll make certain that so long as it's our responsibility to appoint school-board members, we will appoint people who have a progressive ideology of not only (the) curriculum but the methodology of teaching so that we engage our students, and they find the learning process to be engaging and attractive to them," the presumptive mayor added.

At the Youth Mayoral Forum in April, Lumumba mentioned creating a position for a younger person on the school board to have input.

On the topic of food access, Lumumba committed to convene with WTJ and Hinds County within the first three months of his term, in a summit meeting to begin development of a fresh-food finance initiative.

Jackson City Councilmen De'Keither Stamps and Ashby Foote; Ward 7 nominee Virgi Lindsay; and Ward 6 runoff-bound Aaron Banks and Ernest Slaughter also came to the microphone one-by-one to announce and sign their pledge to work with WTJ on the same issues. All the leaders agreed as well to meet with the group at least once per quarter to discuss these issues.

Banks and Slaughter were headed to a May 16 run-off at press time. See jacksonfreepress.com for the result.