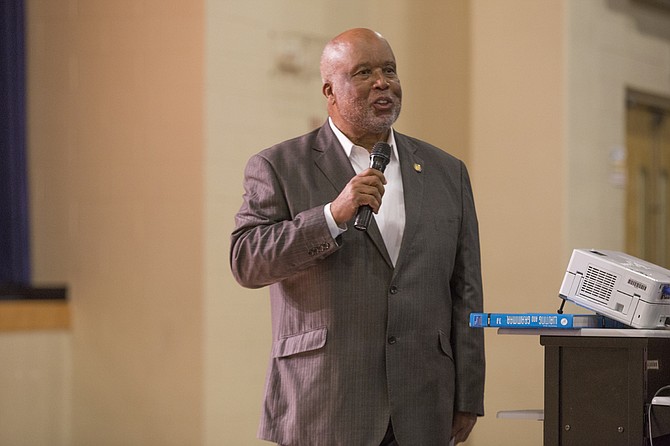 U.S. Rep. Bennie Thompson, D-Miss., said the American Health Care Act, which would repeal most of the Affordable Care Act's provisions, would be a bad law for Mississippians. Photo by Imani Khayyam.

JACKSON — The American Health Care Act is a bad bill for Mississippians, U.S. Rep. Bennie Thompson, D-Miss., said at a town hall at Cardozo Middle School in Jackson Thursday night. Thompson, the state's only Democrat in Congress, said AHCA would affect the majority of people in the state who rely on Medicare, Medicaid and other health benefits.

Thompson focused on the bill's proposed changes that could increase the cost of premiums for seniors, as well as use of a pre-existing condition to deny health coverage.

More than 760,000 Mississippians receive Medicaid benefits, and over half of those are children.

"We're optimistic that the Senate will take a more deliberative approach to it, and one that won't adversely impact the number of Mississippians we're talking about," Thompson said.

During his remarks at the town hall, Thompson encouraged those attending to reach out to U.S. Sens. Thad Cochran and Roger Wicker about the potential health-care legislation. Only state Democratic lawmakers and Thompson attended the town hall which state Rep. Jarvis Dortch, D-Jackson, organized.

Rep. Thompson also addressed the recent firing of FBI Director James Comey, saying he has heard more than five different reasons for his firing. He was alluding to the White House's changing narrative on Comey's firing from blaming his handling of the Hillary Clinton email investigation (which letters from the attorney general's office say is the main reason), to inter-agency turmoil and disapproval of Comey (which the acting director dismissed in Senate hearings Thursday).

"In my estimation, the president is just trying to get rid of anybody that's looking into the Russians hacking into the election, and the best way to do it is to get rid of the man at the top," Thompson told reporters after the town hall. "What we've done historically in this country is not politicize the FBI. We let them do their job, and they go where the facts lead them—and if the facts lead to some of Trump's individuals involved in it, then so be it."

Acting FBI Director Andrew McCabe told a Senate panel on Thursday that the Russian investigation would continue without interference from the White House, and he told senators he would inform them if the White House attempted to intervene, CNN reported.

"I honestly think they're so intimidated by this White House and the fact that they might be the subject of a 6 a.m. Twitterstorm that they're not going to do anything," he said. "I think with the ethics questions ... and the Russian involvement (in) the election, the totality of all these missteps, sooner or later even Donald Trump will have to answer to the people."

Today at 7:25 a.m., Trump tweeted out a threat toward Comey: "James Comey better hope that there are no "tapes" of our conversations before he starts leaking to the press!" CNN reported that Comey "is "not worried about any tapes," adding that adding that "if there is a tape, there's nothing he is worried about" on the tape.