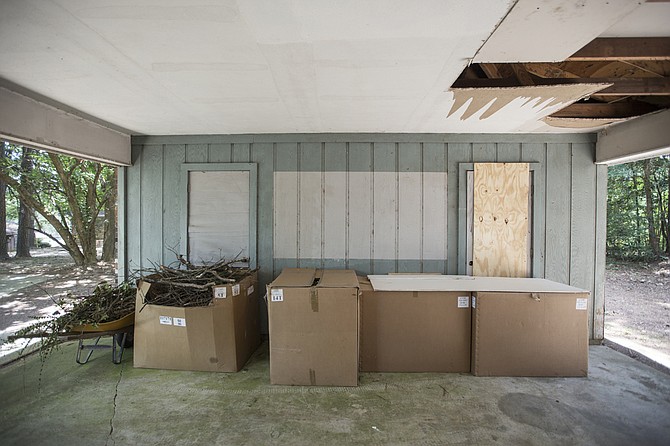 Martin and Marie Schiefer own two properties that was reported to the City more than 30 times. This property, located at 5110 Post Oak Road, is cleaned and maintained by a neighbor who is interested in purchasing the old home. Photo by Imani Khayyam.

Freshly chopped tree stumps and beds of pumpkin-colored pine straw lay scattered on top of patches of dirt and grass throughout the yard of a north Jackson home. At first glance, the home appears to be in good shape but deserted. The yard looks recently cut. The driveway stretches from the street and trails to the far back of the house, where big, brown boxes overflow with broken tree branches. The boxes are leaning against boarded doors attached to what looks like an old car port and storage space.

An off-white sheet of paper, ripped and stapled to one of the many trees towering in the yard, has become home to animal droppings and spiders. The sheet, which is a notice from the Jackson Police Department, endured recent thunderstorms, and as a result, the staples are rusted and have tattooed the paper with brown stains.

The top of the sheet reads "Notice of Hearing," warning the owner of the parcel of a fine and court date.

More Than a Number

The home belongs to Martin and Marie Schiefer, and this is not their first encounter with JPD. The married couple owns two adjacent properties, 5116 and 5110 Post Oak Road, both of which are in similar conditions, and the couple is familiar to the JPD Community Improvement Unit. The two homes have a history of 36 violations combined from the CIU. The violations for those properties instruct the owners to remove excess pine straw, cut the grass, remove trash and debris, and more.

Martin owns the 5116 address with only 17 reports, and Marie owns the home on the right with 19 reports. The couple now live in Clinton, leaving the properties uninhabited for more than 10 years.

The JPD Community Improvement Unit demolished and cleaned land located at 3605 Hollywood Ave (above) and 2720 Miller Avenue on June 8.

The person responsible for maintaining the property wanted to remain anonymous and only identified himself as the neighbor. The neighbor said he cleans the properties whenever a new notice is posted. He cuts the grass, trims shrubbery, boards up holes in the ceiling of the home, and tends to other issues listed on the violation report.

The neighbor shared that his labor is not at the request of Martin Schiefer, however. Martin is about 80 years old and is limited due to his age. The neighbor has done maintenance on the properties for a while now and hopes to purchase the properties from the Schiefers and give them to his children.

He said that Martin does not want to sell the property with Marie's name listed as the owner but has offered to sell the other home. The man said he would not stop fixing the problems if it is not sold to him.

If the Jackson City Council deems the houses to be a menace to public health, it would cost the City of Jackson about $1,100 for yard work on both homes.

The Schiefers are only two of the 40 residents who received similar notices and are required to attend court on June 20.

The notice from the CIU states that owners of the parcels must attend the listed court date to determine whether properties are in a state of uncleanliness and pose a threat to public health, safety and welfare of the community. If owners do not attend court, the judge will apply a fine, referred to as a civil debt. The fine covers costs to the City of Jackson, including the actual cleaning costs, the cost of using municipal employees, any contracts executed to have the work done, and administrative and legal costs.

In order to evade the court date, the parcel owner must complete all violations within two weeks or so. The Schiefers have until June 19 to have their property cleaned. If that does not happen, the code-enforcement officer will identify it as a menace.

The City placed Community Improvement under police jurisdiction in October 2014. When residents report properties to the CIU, JPD inspects the parcel and posts a notice. That parcel owner must then attend administrative court and/or environmental court, located in JPD.

In administrative court, owners can ask the judge to close the case if the land is properly cleaned. Environmental court orders fines for failure to maintain the property, after the administrative court hearing. If the owner does not attend court, the city council then adds it to a resolution, deeming it as a menace to public health. The CIU typically prioritizes properties classified as a menace and posing a threat to the surrounding community. These threats include burned structures and those near schools.

The CIU uses citizens working off misdemeanor fines through community service or private contractors to demolish or clean the property. It may take three weeks or three months to work off those fines, depending on the amount of the fine the judge orders. To perform these tasks over time, the CIU uses a demolition budget up to $300,000 and a grass and weeds budget up to $50,000. In 2015, the CIU used State inmates, but Public Safety Commissioner Marshall Fisher cancelled the program due to obvious dangers. If the budget is exhausted, the CIU then uses Community Development Block Grant funds.

The State of Mississippi has taken over 3,500 abandoned and blighted properties that previous owners failed to pay taxes on for three years. The State refers to the land transfers as a "sale" because the owners give up the property rather than paying taxes they owe on it. While in the hands of the State, the land remains off the tax rolls, drawing or producing no income, however.

That means that the City ends up responsible for cleaning up land that the State technically owns.

"The City doesn't maintain those properties in allotted time because we don't have the jurisdiction, nor do we have the funding for those type of endeavors," said Von Anderson, senior planner with the City of Jackson's Department of Planning. "The properties that the City owns usually are for right-of-way or for future land development."

The City owns approximately 500 properties, with some being municipal properties. As of June 15, the CIU has demolished and cleaned approximately 276 properties since the program began in 2014.

"As long as we have derelict and blighted properties reported to us by the citizens of Jackson, we will make every effort to demolish that reported property and attempt to provide a better quality of life for that citizen," Jaye Coleman, JPD commander of support services, said.