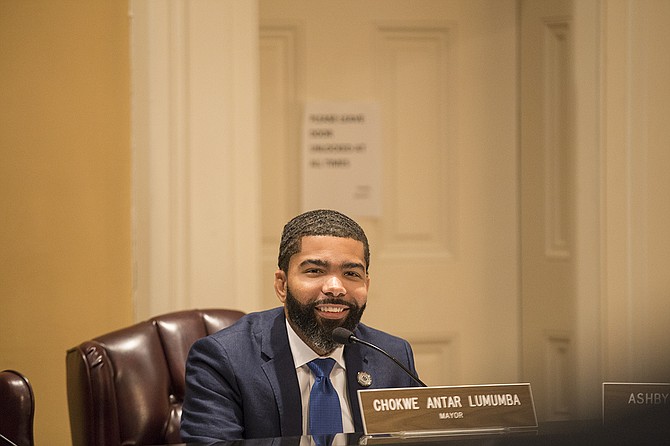 Mayor Chokwe Lumumba has vowed to go vegan for a month to shine light on Jackson’s health issues. Photo by Imani Khayyam.

JACKSON — Jackson Mayor Chokwe Antar Lumumba has vowed to go vegan for a month in response to a letter sent by Pamela Anderson yesterday.

In the letter, Anderson requested that Lumumba go vegan for a month and lead by a healthy example for his constituents.

“If you pledge to go vegan for a month, my friends at (People for the Ethical Treatment of Animals, or PETA) will supply a week's worth of catered lunches for you and send every member of your staff a vegan starter kit so that you can encourage them to support and join you,” Anderson said in the letter.

This afternoon, Lumumba responded at Jackson City Hall. He says that he has never lived a vegan lifestyle but has tried vegan foods.

“I’ve never tried going vegan. I’ve eaten various vegan options over time, and I’ve found some of them to be enjoyable. So, it will be a sacrifice,” Lumumba said. “I’ve been a vegetarian before for a brief period, but longer than 30 days.”

Lumumba plans to contact Gov. Phil Bryant to challenge him as well.

“I extended the challenge to Gov. Bryant, speaker of the house and the lieutenant governor in hopes that we not only raise the profile of healthier lifestyles but also raise the profile and concern of lack of access to healthy eating. Many places in Jackson and many places in our State are considered food deserts, so it’s not only a matter of people’s willingness, but it’s about what’s available to them,” Lumumba said.

He added: “I thought it was a well thought out letter, and I think that it’s an opportunity to highlight the true concerns with healthy lifestyles in the City of Jackson and how it leads to all kinds of health issues that people suffer from. I’m willing to make that sacrifice to demonstrate healthier habits.”

The food options that the mayor and his staff will receive have not been released, but Lumumba says that he is looking forward to the experience.

In a WalletHub study of Fattest Cities in America, Jackson was rated No. 1 compared to 100 of the most populated U.S. metro areas. Jackson was also rated No. 2 for obesity and overweight residents, and No. 1 for weight-related health problems.