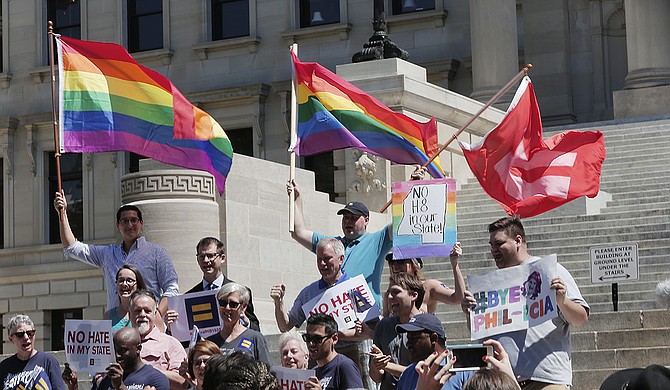 Protestors at a "No Hate in My State" rally against HB 1523 at the Capitol in Jackson. Photo by Imani Khayyam.

JACKSON — Twelve Mississippians have asked the 5th U.S. Circuit Court of Appeals to re-hear their case against House Bill 1523, now law, in front of all the judges.

A three-judge panel ruled that House Bill 1523 could go into effect in June because it ruled that plaintiffs in the case had not proved injury—that they did not have "standing" yet to bring the case. Attorneys from the Mississippi Center for Justice and Lambda Legal represent the 12 residents who say the law can have negative effects on them.

"Bestowing exclusive legal privileges on adherents to HB 1523's specified 'sincerely held religious beliefs,' the statute inflicts an Establishment Clause injury," the plaintiffs' July 6 petition says. "(B)y 'send[ing] the ... message to ... non-adherents (like the plaintiffs) 'that they are outsiders, not full members of the political community, and an accompanying message to adherents that they are insiders, favored members of the political community.'" 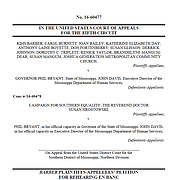 Plaintiffs also allege that HB 1523 inflicts an Equal Protection Clause injury by "bestowing legal privileges on those who would discriminate against members of the targeted groups."

House Bill 1523 outlines and protects three particular religious beliefs: marriage should be recognized as a union of one man and one woman; sexual relations are reserved for such a marriage; and "male" or "female" refers to an individual's immutable biological sex as determined by anatomy at birth.

Lawyers for the Barber v. Bryant plaintiffs asked the 5th Circuit to hear their case en banc (in a hearing by the full court), particularly because of the national public interest in the case.

"Whether and under what circumstances those targeted by these measures will have standing to seek to block them from taking effect through Establishment Clause and Equal Protection challenges is a pressing issue that inevitably will recur," the petition says.

"Guidance from the en banc Fifth Circuit will serve the public interest in greater clarity, shared by LGBT people, those who harbor religious objections to them, and lawmakers alike. The importance of this case is further underscored by the thirteen amicus briefs on behalf of more than 175 amici, including Fifth Circuit states Texas and Louisiana, filed on both sides of the issue at the Panel stage."