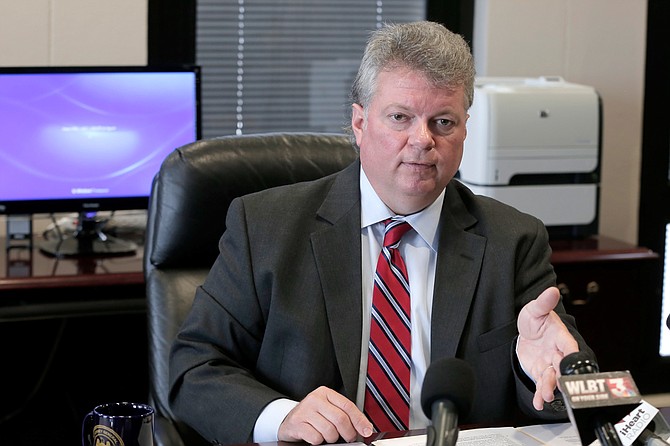 JACKSON — The Mississippi attorney general, who is elected, could be subject to oversight from the governor, lieutenant governor and the secretary of state if Rep. Mark Baker, R-Brandon, gets his way. The move continues a long Republican tradition in Mississippi of trying to limit the State's ability to sue corporations that dates back to the State's role in suing the tobacco industry and could include suits such as the Google lawsuit Attorney General Jim Hood announced this week.

The Rankin County attorney presented House Bill 55 on the floor after it passed through the Judiciary A Committee, which he chairs.

The bill would require Hood, the only statewide-elected Democrat, to seek approval from the Outside Counsel Oversight Commission before he initiates legal actions with a potential price tag of at least $250,000 in attorneys' fees and costs to the state. The commission is made up of three Republicans: Gov. Phil Bryant, Lt. Gov. Tate Reeves and Secretary of State Delbert Hosemann.

Baker told the House that the attorney general's office needed the oversight, reading off a part of the list of companies currently involved in litigation with Mississippi.

"I think we've got to add Google to that list," Baker said on Wednesday.

On Jan. 17, Attorney General Jim Hood announced $26 million for the State's coffers from a settlement with Moody's Corporation. That same day, Hood also announced he was filing a lawsuit against Google for mishandling data of Mississippi public-school students. He accuses Google of collecting personal information and search history obtained from its users in order to advance its own business interests and increase its profit, in violation of the Mississippi Consumer Protection Act.

"By failing to disclose its secret acts of data mining to Mississippi's K-12 schools, publishing deceptive marketing and advertising materials, and making false public statements and assurances, Google unfairly and deceptively secured or was able to maintain contracts with Mississippi's K-12 schools, amassed student, faculty, and staff ... user accounts; data mined those accounts and, created unfair advantage over its competitors," the lawsuit says.

Rep. Baker argued that for amounts over $250,000, litigation becomes a of policy issue—something that should not be left to one person, he said.

"Shouldn't there be some communication back and forth, right hand and left hand, so we know that when there's a problem or issue that we need to resolve?" he told the House. "I've got to say that at this point, it's beyond a proven fact that there needs to be oversight."

Democrats questioned Baker, pointing to the numerous lawsuits their legislation has created that the attorney general is forced to defend, like the Olivia Y lawsuit, which led to 10 years of litigation and millions of dollars in attorneys fees, before the State began to reform its foster-care system.

"The point is, we spend a lot of money on attorneys' fees for things that a lot of us get up and ask the people presenting the bill at the podium, 'Don't you understand that we are going to be in court over this ,and we're going to have to defend this?'" Rep. David Baria, D-Bay St. Louis, told Baker.

"Do you know how much we've spent defending anti-abortion bills and House Bill 1523, and (lawsuits saying) we don't want gay people to adopt? .... Close to half a million dollars and at the attorney general's rate, which as you know is about a third of what private attorneys would charge for those cases."

The debate barely lasted 20 minutes on Wednesday before Rep. Baker yielded the floor. The bill did not pass, failing by a vote of 58-60. Some Republicans voted against the bill, and four lawmakers did not vote—three Republicans and one Democrat.

Baker and Rep. Corey Wilson, R-Madison, held the bill on a motion to reconsider, however, so the bill is not entirely dead. Rep. Baker has introduced this bill before, and each year it has gotten closer to clearing the House. In 2014, the bill died in committee, but the past two legislative sessions the bill made it to a vote.

Last year, the legislation actually passed but then died on the House calendar after it was held on a motion to reconsider.