JACKSON — The Mississippi attorney general’s office wants the jury from Hinds County District Attorney Robert Shuler Smith’s trial back, this time to get to the bottom of why it ended in a mistrial. Smith is charged with conspiracy to hinder the prosecution of defendant Christopher Butler to secure his release from jail on drug charges. 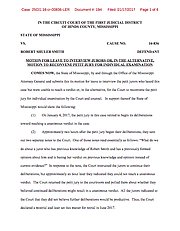 In particular, the state prosecutors want to know why Sharron Sullivan, who is still employed with the City of Jackson, got through to the jury with prior knowledge of defendant Smith.

“It appears that one of the jurors in this case may have violated her oath,” the motion the attorney general’s office filed yesterday states. “At the very least, it appears that an inquiry, and possibly a full-blown investigation, is called for to determine whether a juror violated one or more of the oaths she took before (being) empaneled as a part of the petit juror in this case.”

Assistant Attorney General Bob Anderson wrote the motion, asking the judge to allow him to interview or recall the jury to determine what happened to allow a juror with previous knowledge of Smith to make it past the jury-selection process.

WAPT-TV reported the morning after the mistrial declaration that one of the jurors, who turned out to be Sharron Sullivan, worked for the Jackson Police Department.

Commander Tyree Jones, soon after the mistrial, told the Jackson Free Press that he could not confirm whether Sullivan worked as a dispatcher, as she supposedly told attorneys during the process.

Anderson recalls the jury-selection process in his motion. “Inquiry regarding the juror’s place of employment reveals that her juror questionnaire reflected that she worked for the ‘COJ’—and neither party was able to discern that ‘COJ’ was apparently shorthand for ‘The City of Jackson,’” Anderson wrote.

Shelia Byrd, the communications director for the City did not return a request for clarification of Sullivan’s employment status with the city. Calls to the personnel department of the Jackson Police Department confirmed that Sullivan is currently employed with JPD. However, Anderson stated in the motion that he did not know she worked for the City during the jury-selection process.

Anderson goes so far as to reference his personal notes from the case: “The undersigned Special Assistant Attorney General’s notes from the jury selection process reflect that No. 4, who appeared in the venire as Juror No. 12 on Panel No. 1, responded that she had ‘read about the case’ but that she could be fair and impartial as a juror.”

Where Anderson sees a goof by both sides, who apparently overlooked the conflict during the process, Waide claims it was a deliberate tactic by the prosecution, seeking relief in a motion also filed Jan. 17, stating that the attorney general’s office provoked the mistrial.

Smith's Motion for Relief Based Upon Juror Misconduct 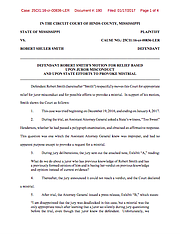 “The juror at issue was an employee of the Jackson Police Department,” Waide wrote. “The juror (was), therefore, a ‘state actor,’ just as would be a judge or prosecutor for purposes of applying the Fifth and Fourteenth Amendments to the United States Constitution.”

If the juror was a State tactic, Waide argues, then there should be no second trial. “Thus, if the juror’s actions were intended either to obtain a conviction based upon improper practice or to provoke a mistrial, a new trial should be barred under the double jeopardy…,” Waide wrote, citing the U.S. and Mississippi Constitutions for support.

Waide, like the State, wants a hearing to investigate the matter.

The State responded to Waide in a motion the same day, stating that there was “no evidence” to claims that it was attempting to provoke a mistrial and reiterated its position that the blame for not catching the juror’s conflict rests on the shoulders of both sides. 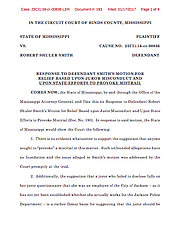 “Thus, if there was some improper conduct regarding the seating of this juror, the Defendant is equally at fault for failing to inquire further about her employment as a ‘dispatcher’—which appears to be all that she disclosed about her employment beyond what appears on her juror questionnaire,” the attorney general’s response reads.

The judge has not yet set a hearing on the matter. The next trial is scheduled for June 12.