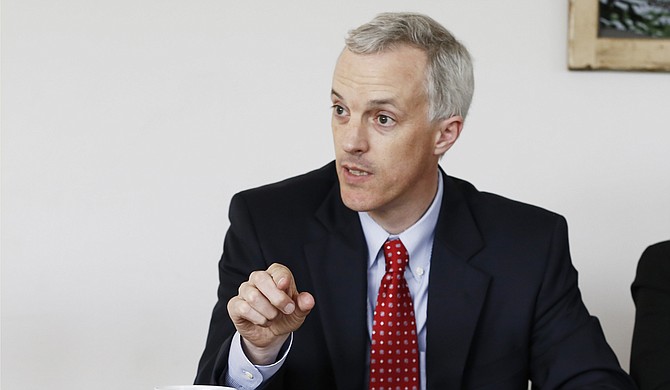 Sen. David Blount said this morning that the Jackson delegation is planning a new attempt to garner $24 million in state funds for city infrastructure in a bill called the Capitol City Infrastructure Fund. Photo by Imani Khayyam.

JACKSON — During a small informal community meeting this morning, Mississippi Sen. David Blount, D-Jackson, explained a proposed bill to send an additional $24 million in tax revenue back to Jackson's crumbling infrastructure, administered through the Mississippi Department of Administration and Finance.

Blount said at the Greater Belhaven Neighborhood Foundation on Fortification Street this morning that the four senators in Jackson, all Democrats, all approve the bill: Sen. Hillman Frazier, Sen. Sollie Norwood and Sen. John Horhn along with Blount.

"It's going to be about $24 million a year, and we are calling it the Capitol City Infrastructure Fund, and it has to be spent on infrastructure in and around or providing access to state property or connects to state highways," Blount said. "... The governor has talked favorably about this."

Blount said he spoke with Bryant about the bill yesterday as the governor had his boots shined. "I took the opportunity to lobby," Blount said.

The bill targets funding for city streets "where the state has significant investment," Blount said.

Blount said the condition of the streets can affect the selling prices, and value, of the buildings themselves. "The new proposal this year essentially gives Governor Bryant and his appointee the power to choose where to spend this money in the City of Jackson, and I don't really have a problem with that," Blount said.

The governor chooses the head of the Department of Finance and Administration, the "primary agency responsible for state government financial and administration operations including employee payroll, vendor payments, employee insurance, construction, maintenance, and protection of State buildings in the Capitol Complex, financial information management systems, management of the State's vehicle fleet, and numerous other related activities."

"The one-percent sales tax commission seems to not really be able to operate smoothly," Blount said of the group assembled to decide how to use funds supposedly targeting Jackson infrastructure. "I think the governor is going to take Capitol Street and fix it."

Blount said the text of the bill is not written yet, but described how the $24 million would be allocated. First, the DFA would administer the whole of the process, beginning with assembling an advisory committee comprised of local community leaders. That could include the head of the University of Mississippi Medical Center and the president of Jackson State University, but he said that those sorts of details might change as the bill moves through the legislative process.

This advisory committee, Blount said, would then formulate a plan for the funds, based on what they determine to be the infrastructure needs of the city, hedged in by the restrictions mentioned earlier.

The advisory committee's plan then goes to the Jackson City Council for approval, but would not require unanimous approval.

After the plan is approved, the DFA takes control of implementation, Blount said.

This new bill is the next iteration of a failed piece of legislation last year called the Capitol Complex Improvement District in SB 2525, which died in conference at the end of the session. It would have created a commission of appointees to administer about $21 million for infrastructure improvements.

"On the last weekend of the last week of the session, there were two changes to the bill that had never been discussed during the entire 125-day session," Blount said.

The two changes were the addition of a special judicial district within the downtown district with the only appointed judge in Mississippi, as well as a complete defunding of the bill.

"They did not propose a bill that had any money in it," Blount said.

Because of these changes, he said, the bill died in conference. The deadline to introduce bills is next Monday.

Virgi Lindsay to Run for Ward 7

Virgi Lindsay was the executive director of the Greater Belhaven Neighborhood Foundation, but in November of last year Laurel Isbsiter took her place. Lindsay said her official announcement is Friday morning at City Hall when she officially registers for the municipal race.

"I am getting going, and I am working really hard," Lindsay said. "You can find me on a radio station most every afternoon at 5 o'clock this week, and I am really having a blast so far."

"I'm very excited about this opportunity," Lindsay said. "The issues are vast, but there are four issues that I have identified that are the ones that I care about."

They are infrastructure, the leadership in public schools, improving and protecting housing, and "making Jackson safer."

Lindsay said for her safety in the city was a "police force, salary" issue.

Lindsay said she is not running against the incumbent, who has not confirmed to the Jackson Free Press whether she is running for re-election. Barrett-Simon has held the seat since 1985, and ran unsuccessfully for mayor in 2014.

"I am not running against anyone. I am running for the city of Jackson," Lindsay said.

Correction: A previous version of this story reported that Virgi Lindsay was the current executive director of the Greater Belhaven Neighborhood Foundation, but Laurel Isbsiter took over in November 2016. We regret the error.