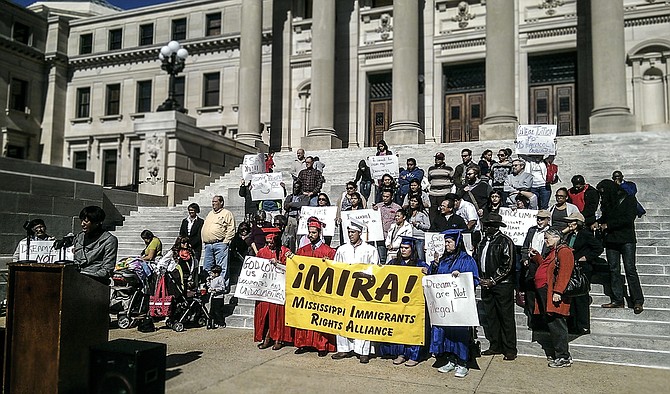 The Mississippi Immigrants Rights Alliance has led the charge against laws targeting the undocumented here for years. Photo by R. L. Nave.

With a president hell-bent on securing borders and going after undocumented immigrants in the name of drug wars and criminal activity, it is a scary time to not technically be legal.

There are immigrants living in communities across the U.S. and yes, in Mississippi, who might have documentation that allows them to work, go to school and be tax-paying citizens. The reality, however, is that not all documentation means you are here "legally" by Donald Trump's definition. Myriad documentation options allow children of undocumented immigrants to attend school and college. Visas also protect undocumented victims of human trafficking or harassment.

The "they're not citizens" argument largely relies on the argument that immigrants without papers usually aren't paying taxes due to their lack of documentation. This is true in some cases, but under the Obama administration, options like the Deferred Action for Childhood Arrivals program allowed certain undocumented immigrants to study and work in the U.S. without a fear of deportation, which also means paying taxes. Daniela (see page 6) is one of those DACA students. Many people have lived as Mississippians longer than in their country of origin.

They are Americans, and they want to be.

President Donald Trump has made his approach clear: taxpayer-funded walls and detention facilities for illegal immigrants. This strategy will hurt taxpayers—some of those being undocumented immigrants cleared to work—as well as local economies. Our neighbor state Alabama tried to crack down on illegal immigrant workers in its agriculture sector in 2011. The idea of the law was to open up jobs to unemployed Alabama residents who were also American citizens, but when the law scared immigrant workers from those fields, jobless American citizens lacked the stamina or just the willingness to do the work, the Associated Press found. Crops rotted as a result.

Senate Bill 2710 prevents any city, county, college or state agency from declaring itself to be a sanctuary for illegal immigrants. The bill, targeted at Jackson, which is the only city in the state with such an ordinance, is only political in nature at this point, and ironically, Trump is proving that such a state law doesn't need to exist at all because federal law will trump local as well as state control of law-enforcement resources.

Trump's immigration policy, although wildly vague and unclear, is perhaps most terrifying because it trumps a hierarchy of immigration crackdowns—even in Mississippi. (Obama primarily focused deportations on criminal illegal immigrants.) Mississippi lawmakers do not need to fuel the political fires of Trump's fanatical and often false immigration claims, and their track records will look better if they don't go down such a bigoted, vicious road. Targeting immigrants may be an easy vote-getter in the short term, but that does not make it right or just.