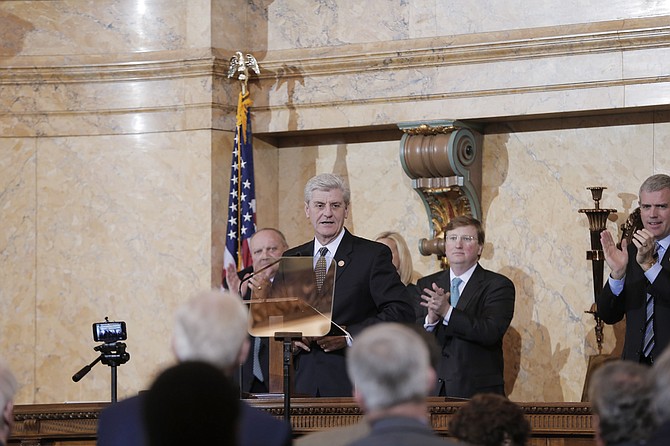 Gov. Phil Bryant emptied his campaign account, donating more than $760,000 to a leadership PAC to help fund politicians he wants to see elected in the future. Photo by Imani Khayyam.

JACKSON — Gov. Phil Bryant terminated his campaign-finance account on Jan. 31, disbursing the funds to other political committees, candidates and charitable organizations. His largest disbursement, over $760,000 of his $1.05 million, went toward establishing a new political action committee: Imagine Mississippi PAC. 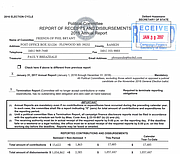 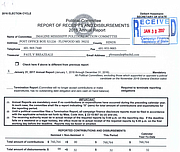 Breazeale said the new PAC is for Gov. Bryant to support other politicians in the future. "It's a leadership PAC, which means he's going to help politicians that he would like to see get elected," Breazeale told the Jackson Free Press.

The treasurer said the timing of terminating Bryant's campaign account came from the governor himself, and in order to file a termination report by Jan. 31, they created the Imagine Mississippi PAC. When asked if Imagine Mississippi would be able to give money back to Bryant, Breazeale said he believes that is not permitted under state law.

"Now that it's (the money) in a leadership PAC, so effectively he (Bryant) decided to forego that option," Breazeale told the Jackson Free Press.

Other state leaders continued to receive donations in 2016, especially Lt. Gov. Tate Reeves, now with the most cash on hand of any state leader. Reeves received more than $1 million in donations in 2016 alone, bringing his total cash on hand to over $4.3 million. Secretary of State Delbert Hosemann has more cash on hand (over $1.5 million) than Attorney General Jim Hood, a Democrat, or House Speaker Philip Gunn, a Republican, campaign-finance records show.

The House passed a campaign-finance reform bill this session, which would prevent lawmakers from spending their campaign donations on personal-use items like cars, clothing or anything not directly related to seeking public office. The Senate will need to pass the bill for it to become law, and then Bryant sign it.

Lt. Gov. Reeves continued to vocalize his support for unlimited contributions and unlimited disclosure, and in a statement hinted at a compromise campaign-finance bill passing this session.

"I'm encouraged by today's action by the House of Representatives, and I appreciate Speaker Gunn's leadership on this issue," Reeves said in a press statement on Jan. 11. "The Senate passed strong campaign finance reform last year, and I'm hopeful that today's action improves the likelihood that a legislative compromise can be reached during this session."

Today, Reeves sent a further statement to the Jackson Free Press: "Our focus on strengthening our economy and encouraging job growth has led to tax relief for all Mississippians, increased expectations and positive results in the classroom, and a better fiscal foundation and accountability of how our tax dollars are being spent," Reeves said about his campaign finance report.

"Republicans, Democrats, and Independents alike have rallied to support Elee and me over the last several years, and we are honored to work with our fellow Mississippians to make our state the best in America to create jobs and raise a family."

Email state reporter Arielle Dreher at [email protected] and follow her on Twitter at @arielle_amara. Read her "Politicians for Sale?" series at the #MSLeg at jfp.ms/lobbyists. Read more on campaign and politician transparency at jfp.ms/sunshine.