EDITOR'S NOTE: Tis the Season to Stop Judging the Poor 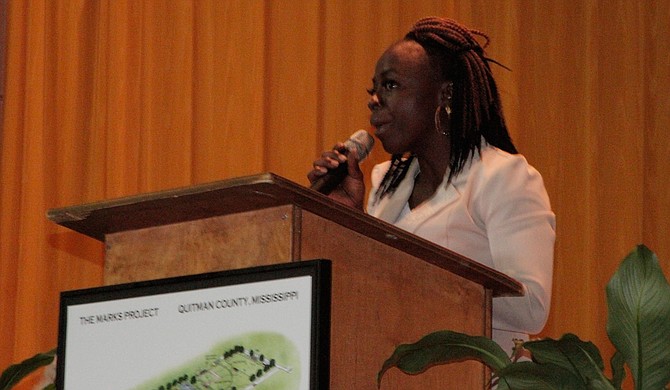 Otibehia Allen is struggling to raise her five children in a small town in the Mississippi Delta. “My greatest hope for my children is that they see I’m trying to have a better future. I’m trying,” she says. Photo courtesy Rachel Fradette

I meet many folks who have been in serious trouble with the law. Almost to a person, they have told me that "my parents didn't teach me to do anything." One of them, a local white man, said he didn't get a driver's license until he was 39. He didn't know the business of "adulting," as it's often called now. His parents lived day-to-day, spending every dollar on getting high. Still, they had fun cookouts, even if they had no real aspirations for their children. It was the dark side of living in the moment.

I get it in a visceral way because I, too, grew up in generational poverty with a mother who rolled up nickels to buy Christmas presents and Easter baskets. We moved constantly because we'd get behind on payments or my alcoholic father(s) would "drink up his paycheck," as my mother put it, usually while crying.

Unlike what many privileged leaders tell us, escaping this cycle isn't just a matter of yanking on our God-given bootstraps as President Reagan used to chide. My parents were illiterate—he could read a little; she not at all—and they grew up barefoot part of the time. Bare feet don't have bootstraps. You catapult from day-to-day, trying to stay ahead enough not to go hungry or have the lights turned off, even if you eat milk and cornbread for supper a lot.

When you get a few dollars, you might spend it fast for a temporary high, often on trivial, cheap things—like getting a tax refund and blowing it on clothes or eating out instead of a class or tools needed to start a home business.

It is easy and cheap to judge people in these circumstances, but such condemnation is at an all-time high right now from people who haven't walked a mile, or a yard, without shoes or bootstraps.

Poverty, and what it creates around us, is a bear to overcome. It can rob you of the belief that you can be better than the life you inherited. It strips your self-confidence. It can cause you to stress out over looking stupid, thus not speaking up enough in class or at work or asking for opportunities. And sometimes when you do, people will laugh at you or won't look you in the eye, or return your calls or emails. It happened to me many times along the way. Poverty is perpetual indignity, even on the road out of it. You're not invited to the tables that would enable you to move to the head of it one day. And when you are, you might end up staring at the forks in fear.

Too often, I experienced condescension and looks on people's faces that show me that they did not believe I was, um, "born" to succeed or to be in the presence of powerful people who come from generational success. That is a lot to overcome as a poor kid or young adult.

You can, but not without teaching, mentoring, resources, listening, work and, yes, high expectations and the help to meet them. It takes grit and resilience, which you often have to learn in fits and starts and hope you survive the early failures without giving up. You have to find the people who will support, teach and respect you all at the same time. The respect is the toughest hurdle. You must learn, by trial and error, how to take tough advice while standing up to people who might, even unintentionally, rob you of your dignity or who want to feel good and praised about helping lowly others rather than seeing you as an equal who needs the same leg-up, a stronger network, loud supporters and the achievable high expectations they enjoyed.

Success is never about looking for handouts, and if you have my stubborn pride, you lose a little piece of yourself every time you have to ask for help or when someone looks down on you. I will never forget the shabby treatment from some come-uppity Neshoba Countians—tacky rich, I'd call them now—when I waited tables at the country club there for an event. It scarred me, and I've hated pretension since that day. If I'm not careful, though, I will still try to avoid it to the point of losing opportunities. That's not good, either.

I still give thanks for the teachers who believed in me and held me to high standards, and prodded me take needed steps, to rewrite, to apply for scholarships, to state unpopular views. There was that fifth-grade teacher whose name I've forgotten who pulled me inside at recess when I was being bullied and handed me a copy of "Little Women." Ms. Hodges with her red Flair pen ripped my writing apart and named me to my first editor's gig, and Ms. Salter kept telling me I would be great some day if I worked hard. Those women were the progenitors of my "new girls' network," as I call it now, that helped me survive difficult times and the indignity of going home to a trailer filled with way too much drama, and a lot of love.

The road to grit and resilience—which are especially key for first-generation aspirants—is a long slog, and more so if you didn't grow up privileged, white and male.

Those early mentors and others lifted me from the trailer park to eventually attend graduate school in the Ivy League. But even there, my thoughts about southerners (and being one) and on the warning signs of systemic sexism and racism across the U.S.—think #metoo and Donald Trump—were not taken seriously, and often belittled, even cut off by some pretentious professors. I was 40 and still interrupted by men.

When you grow up in poverty, and are thus treated, purposefully or not, like you're not worthy in myriad ways, it is easy to believe there can be nothing larger out there for you. Even when you do want more, the levers aren't always there to pull, or you end up facing holier-than-thou people. I also know that what a white girl living with a mother on food stamps with abusive husbands faces is still not as bad as the trauma that comes from people killing on the corner over drug deals and beefs in segregated, ignored, trauma-filled neighborhoods.

Still, every kid should get to stay the course to a better life, and with strong adult help that mixes compassion with the ferocious love needed for us to make up for what we didn't have at home or school. We must all learn to "adult," and the truth is our parents did not always know how, either, or maybe our grandparents.

My challenge is to stop judging people born into poverty. Save your ire for what really matters—cycles of race, gender, wealth and other inequities that keep our state mired in poverty. We must end the disparagement of people who need help growing the bootstraps necessary to move out of poverty—and help them find the courage to then yank on them, over and over again.