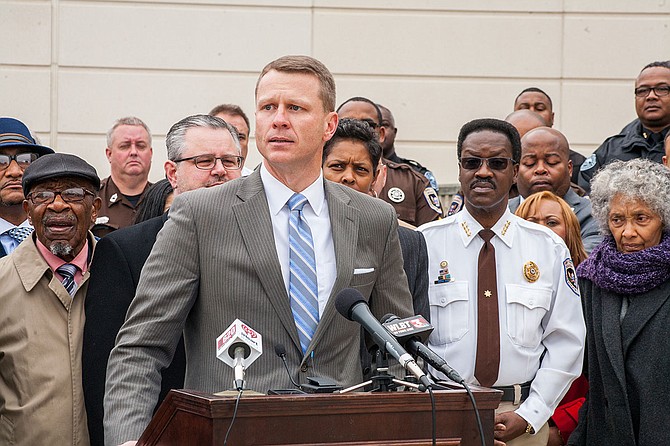 The Region 8 mental-health facility that serves Rankin, Madison and other counties must pay almost $7 million to the U.S. government, a whistleblower and the state's Division of Medicaid after U.S. Attorney Mike Hurst (pictured) announced the False Claims Act settlement on Dec. 14. Photo by Stephen Wilson.

JACKSON — Region 8 Mental Health Services must pay back $6.93 million to the Mississippi Division of Medicaid, the U.S. government and a whistleblower because the facility did not provide proper services and staff needed for its preschool day-treatment program from 2004 to 2010. Region 8, a publicly funded facility, serves Madison, Rankin, Lincoln, Copiah and Simpson counties.

"Our children are among the most valuable and vulnerable in our society, and it is imperative that we do all that we can to protect the programs that offer them the services that they need," Hurst said in a press release. "The work we do in combatting waste, fraud and abuse in government programs is among some of the most important work this office does, and we will continue to vigorously investigate all allegations of fraud."

Region 8 referred the Jackson Free Press to its attorney, Amanda Barbour, for comment. She did not return messages by press time.

The case against Region 8 started after a former employee filed a lawsuit on behalf of the government for false claims, which allows the whistleblower to receive some of the settlement money. That person, who is not named, will receive $1 million in settlement funds, and the Mississippi Division of Medicaid will receive part of the money it lost as well. 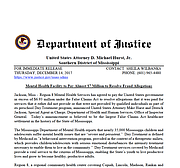 Mississippi's mental-health system of care for children was the subject of a class-action lawsuit for several years until this summer, when the last plaintiff was able to move out of an institution and into integrated care in July.

The State released the long-secretive Technical Assistance Collaborative report as well, which shows the need for Mississippi to move to more community-based options for treating children's mental health.

Mississippi is still in the midst of another Department of Justice lawsuit for over-reliance on institutionalization for adult mental-health care.

The DOJ statement said that the agreement does not indicate whether or not Region 8 was liable for the specific allegations. "Moving forward, Region 8 will be subject to oversight under its Corporate Integrity Agreement with the U.S. Department of Health and Human Services, Office of the Inspector General," Hurst said in the press release. "This agreement is designed to increase accountability and transparency and prevent future fraud and abuse. The claims settled by this agreement are allegations only, and there has been no determination of liability."

The settlement agreement is sealed, blocking the public from viewing it.

"Region 8 cooperated with government officials and worked to address their inquiries over the past several years as it continued to provide the highest level of mental health programs and services to those in need across the region. It is important to note that the allegations related to one specific program conducted in one county that is no longer ongoing and has been shut down for 7 years," the statements says. "While Region 8 would have preferred to spend its resources on the community it serves and does not believe it did anything wrong, it came to the realization that protracted litigation with the government was not in the best interest of Region 8 or the people they serve. Region 8 admits no wrong doing in this settlement and the settlement will not disrupt or impact the services Region 8 provides to the community."