America, We Sink or Swim Together 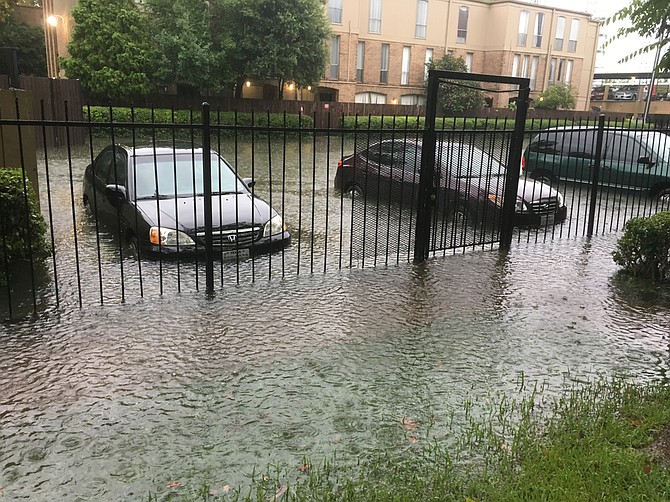 Flood waters rise in Houston as a result of Hurricane Harvey on Aug. 27, 2017. Photo courtesy Flickr/isfullofcrap

The picture ought to become a statue to replace those other ones, one Twitter user quipped. It was the one of the black deputy in yellow protective gear, waist-deep in Houston floodwaters carrying two white toddlers to safety. The girl and boy held onto to their savior tightly as he waded through the water in front of their brick home.

The man was just doing his job, but I cried at that photo Sunday as I did at the videos of journalists saving the stranded truck driver and then a CNN crew helping an elderly man out of chest-high water, along with his two little dogs and then his wife with Alzheimer's. Then there were the dudes from a Dallas bar who brought their truck on down to Houston and were helping an elderly lady into its cab as one of them stood holding her white puffy dog.

There was the black man floating his two babies out in an old refrigerator and the jubilant retweets about the #CajunNavy headed to Houston to help rescue people with their personal boats—something we could all see that no government or led by any political party was prepared to do.

It was the best of humanity, and it was exhilarating in desperate times to share the images. I was retweeting folks with "deplorable" in their Twitter handles, and someone called Happy Trumpster retweeted me. They might have been clashing out in Berkeley, but if there has ever been a week for a temporary ceasefire and all-hands-on-deck, it is this one, as America's fourth-largest city drowns in a natural disaster.

It's not braggadocio to say I saw this flood coming. Not the specifics, of course, but it was apparent leading up to Hurricane Harvey making landfall that the floodwaters would be his lingering curse. Last Saturday morning, when I saw tweets relieved that Harvey had dropped several category levels, and memes about not messing with Texas, I had an impending sense of dread. But, but, the flood waters. What if they come?

Part of being American seems to be a requirement that we never believe the worst can happen to us. We seem to think we can wish, or barbecue, or drink, or tweet, or blame it away. That goes for everything from logical effects of our dark racial history and embedded wealth divides to the scientific evidence that weather patterns are getting worse. It doesn't matter enough that science shows why and what we must do to lessen the potential of losing one or another great American city. Too many just shrug.

In some ways, our country was founded on PollyAnnish notions. It started with everything it took to justify what our "founders" wanted to do, from conquering Native Americans (and their land) to enslaving people to farm that new breed of lucrative tobacco they stumbled on. A certain naiveté has undergirded who we are to the present. It'll all be OK if we kick the can on down the road and maybe pray about it, we're told and too often believe as a nation.

As a result, we're too easily divided by demagoguery such as that displayed by the president just since Harvey started bearing down on Texas. Donald Trump is like that bizarre and never-quite-explained smoke monster that kept swirling around in the TV show "Lost." He shows up at the worst times, and then does outrageous things and makes Americans think they have to take sides between "us" and "them" out of fear.

As the hurricane rushed toward landfall, Trump pardoned a hideous thug of a sheriff, telegraphing that anything goes when it comes to treatment of immigrants, women and anybody else not like him. Trump also decided under the cover of a clearly huge weather event to officially bar transgender soldiers from the military, even though LGBT people were plucking people out of the water. And he announced a rollback of DACA immigrant protections.

On Sunday morning, knowing that many Texans were underwater, Trump tweeted about a different crazy sheriff, who seriously might be his only black friend, and then announced that he was reversing the ban on selling military equipment to law enforcement—meaning arming U.S. cities against all those dark people who are the troublemakers, you know.

Trump also slammed Mexico, saying he would build the wall and make them pay for it even as they prepared to send help to Texas. Meantime, the "fake" media he abhors and libels were then putting down their mics and lifting people out of water poisoned with God-knows-what where they would have drowned otherwise.

As Houston and surrounding cities drowned, Trump was pushing the bigotry that fueled his rise to power. Meantime, America was proving our inherent greatness, despite the incessant efforts by certain leaders to trump it and force us to distrust and despise each other.

No, said the best of America, at least for now. There was that tall, handsome white SWAT officer who carried the Asian mother with her sleeping 13-month-old son to dry land. The teenage boys who took their flat-bottom boats and motored door to door looking for people needing a lift to safety. The men lifting soaked people of all races back into their wheelchairs.

What Trump and his political creators expect is that we come together in a temporary disaster, as so many did during Katrina, Sandy and the Baton Rouge floods, and then retreat to our corners and resume the punching match that serves their greed.

But here's the thing. When they use these devices of division to keep us separate and, thus, enough voters blocking regulations that can lessen the severity and frequency of 500-year storms, they are selling out their own families and future progeny to the hunger for power and tax cuts for the wealthy. Harvey did not see race, economic status or anything else. Those heroes had to remove babies, mamas and daddies, and grandparents from micro-mansions just as they did from enclaves of working poor.

Trump is the embodiment of the worst of us. Maybe the universe sent him as a test to see what temptations we Americans can resist—and if we can hold our democracy together. We must together resist the pull and glitz and empty promises of division.

The lesson of this storm must be that we really do sink or swim together as a nation. Just like the Cajun Navy, we have to hitch up our gear, open our hearts and do this our own damn selves.

We must save our nation together.