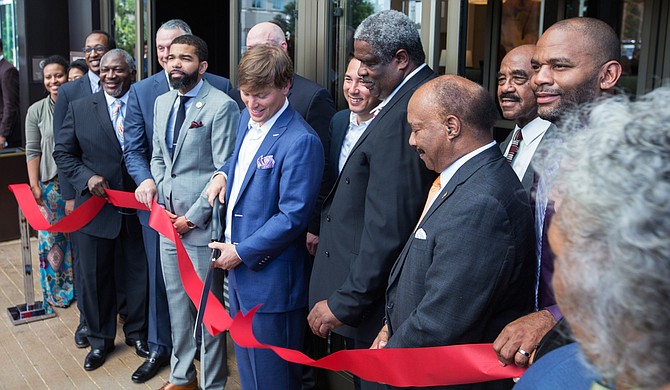 The Westin Hotel in downtown Jackson officially opened on Thursday, Aug. 3, when city, county and state leaders gathered to cut the ribbon to the entrance of the new 203-room property located on South Congress Street across from the federal court building.

"If we want to bring people in for ... tourism, where are we going to put them?" Simpson said before the ribbon-cutting. "I wanted a place we could be proud of, where you could bring your family and friends and (chief executive officers) for business meetings, so I hope we are that beacon."

The Westin hotel project was seven years in the making, and Simpson expressed gratitude to all of the partners, including Wischermann Partners, who invested in the project.

"The most important part of this is you've got the state, the city and the county that all came together for this project," he said.

The hotel property has a restaurant with a full bar as well as a spa that will be open to the public—not just hotel guests. The property also has a large ballroom and 12,000 square feet of meeting space. This is the first Westin property in the state of Mississippi.

Mayor Chokwe Antar Lumumba attended the ribbon-cutting and said the hotel is important in his strategic plan to bring more people to the capital city.

"I think we can expand upon it; I encourage the state to expand its tax-rebate program so we can build more institutions like this that will help assist in making Jackson and the state of Mississippi first-class," he told the Jackson Free Press.

Rooms at the Westin start at around $120 a night, depending on the number of people staying in the room, its website shows.