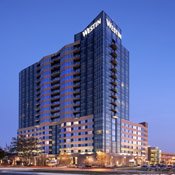 Developers envision a hotel like the Westin Galleria in Edina, Minn., (pictured here) in downtown Jackson. The Jackson hotel would only be nine stories tall, but it would have luxury amenities such as a spa.

Joseph Simpson wants to build a luxury hotel in downtown Jackson near the federal courthouse and re-open the Iron Horse Grill a few blocks away. He briefly described his development projects to the Jackson Redevelopment Authority board yesterday during the group's regular meeting. His intention is to get $15 million in bonds from the JRA to help fund the projects.

"I've been working on this for a couple years," Simpson told the Jackson Free Press during a break in the meeting. He said he hadn't taken the story to the media because he wanted to work out all the details first.

Simpson said his group, Capital Hotel Associates LLC, plans to build a $55-million, 205-room Westin hotel that would face Congress Street. It will be a full-service luxury hotel with amenities such as a spa. Plans call for a nine-story structure. The property includes where the Mississippi Valley Title building now stands at 315 Tombigbee St. Simpson said crews will have to demolish the old building.

The total cost of re-opening the Iron Horse Grill, which burned down twice in the late '90s, and building the Westin hotel comes to $61 million, Simpson said. He is asking the JRA for $12.5 million in bonds for the hotel and $2.5 million in bonds for the restaurant. The board did not vote on the bonds and won't until the initial vetting and application process is complete. Jason Brookins, JRA executive director, said this would include examining financial agreements of Capital Hotel Associates.

Simpson told the board he'd also like to put some money toward developing a trolley system downtown. "It is something that will change the perception of downtown," he said.

Simpson is working with Minnesota-based Wischermann Partners on the concept of the hotel. Wischermann operates the Westin Galleria hotel in Edina, Minn., and Simpson said it would operate the proposed Jackson hotel. The architects, construction companies and other members of Capital Hotel Associates are local, Simpson told the JRA board.

Capital Hotel Associates would also use New Market Tax Credits to fund the developments as well as personal investments.

Simpson is a financial advisor at Morgan Stanley Smith Barney in Jackson. Capital Hotel Associates is a separate entity. He is also a co-owner of Julep and Mint restaurants in Jackson.