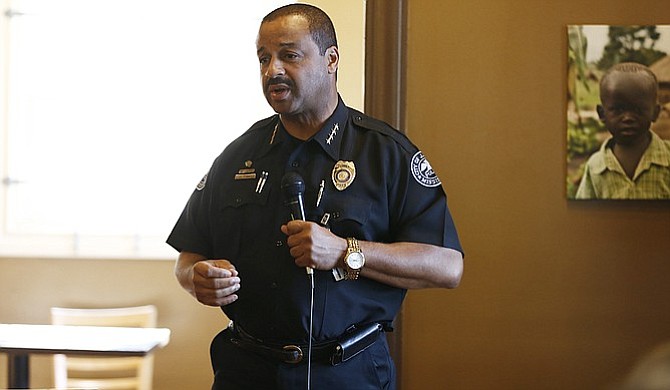 The City of Jackson reached its 54th violent death this week, as Police Chief Lee Vance tells his officers to prepare to do more with less in this tight financial climate. Photo by Imani Khayyam.

JACKSON — As Jackson suffered its 54th violent death this year, Jackson Police Chief Lee Vance reminded his team that they would have to do more with less during this difficult budget climate.

"We are going to have to do some things in order for us to be able to stay where we need to be from a fiscal standpoint," Vance said during the Oct. 6 COMSTAT meeting in police headquarters. "We would appreciate it if you all would be flexible."

"We are very, very, very limited in resources. Very limited," Vance said. "Aside from us being upside-down with these shootings and these homicides, the rest of our crime picture looks really, really strong. We are doing a very good job. The thing with the homicides, as y'all know, the type we have is very hard to predict and therefore very difficult to intervene. But we are looking at ways to work on that number."

Overall, Jackson is brushing up against its total last year of 58 homicides. Major crimes are down so far for the year, by 9.4 percent, with property crimes down 10.4 percent and violent crimes by 5.6 percent.

Three of the four precincts reported a drop in total crimes, except for Precinct 2, which saw a 10-percent increase for the period of Sept. 26 to Oct. 2 over the previous reporting period.

Vance took the time to congratulate his officers on the arrest of Dashund Davis, 35, for the alleged kidnapping of a 13-year-old girl on her way to school Oct. 1 in the 400 block of Woody Drive. Officers during the COMSTAT meeting said the girl escaped and called police, providing a description that led to the arrest. Vance asked the officers if they could coordinate with the district attorney's office to push for additional charges if possible.

Assistance for the City in its fight against crime may soon be on the way in the form of federal cooperation. Mayor Tony Yarber and Chief Vance both traveled to Little Rock, Ark., last week to attend a meeting of the U.S. Department of Justice's Violence Reduction Network. The organization brings together different cities, such as New Orleans and St. Louis, to share insights and evidence-based solutions to reducing violent crime.

"The City of Jackson's overall crime rates have been down significantly for more than a year. Joining the VRN will support our efforts to continue to reduce crime numbers and strengthen our community alliances by utilizing proven best practices," Mayor Tony T. Yarber said in a release from the City about the network.

Former St. Louis Police Chief Dan Isom, who will be Jackson's liaison with the network, will visit Jackson in the next several weeks, Vance said. The network could open doors to funding and additional training for the department. Vance said it would happen over the next two years and that, at the moment, he was not sure about all of the particulars of the program.