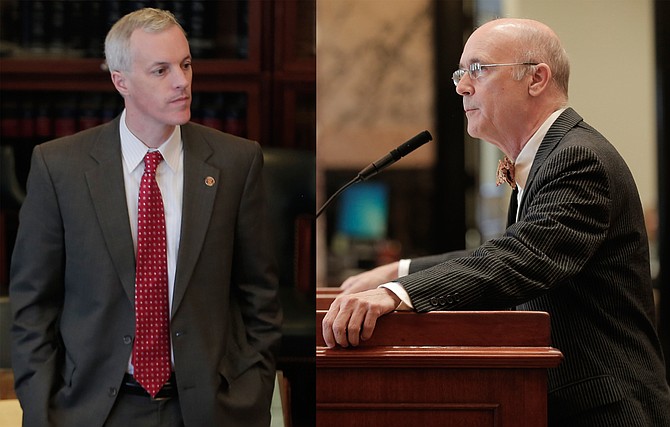 Repealing the "Taxpayer Pay Raise Act of 2016" is the first step to funding the state's infrastructure needs, our Mississippi state senators, all Democrats, say. In a brief meeting on Wednesday, Nov. 2, Sen. David Blount, D-Jackson, Sen. Angela Turner, D-West Point, Sen. Sollie Norwood, D-Jackson, and Sen. Hob Bryan, D-Amory, proposed repealing the massive tax cut the Legislature passed in the last session in order to generate $6 billion worth of revenue over the next 20 years.

"I think every Mississippian knows that we have a crisis, and what's been missing so far is a specific proposal put forward by elected officials on how to address that process," Blount told reporters Nov. 2.

The Taxpayer Pay Raise Act is set to go into effect in 2018 but, over 12 years, would eliminate the state's corporate franchise tax, as well as the two lowest income-tax brackets and self-employment taxes. Mississippi Department of Revenue data show that the new law would divert $416 million from the state's general fund by 2027.

Lt. Gov. Tate Reeves and House Speaker Philip Gunn, both Republicans, created a joint legislative tax panel to review the state's entire tax code throughout the summer. But so far that panel has consistently heard from an economist from the conservative-leaning Tax Foundation, which heavily favors tax breaks for corporations.

"Lt. Gov. Reeves believes raising taxes on either Mississippians' income or employers' investment in the state will hamper long-term economic growth," an emailed statement from spokeswoman Laura Hipp said when asked for a response to the Democrats' proposal.

"If you take that same amount of money and put it in a fund by itself, then we could make enormous strides," Sen. Bryan said Wednesday. "We could make a dramatic impact in improving our transportation and infrastructure."

The four Democratic senators plan to use the force of "moral persuasion," they said, pointing out that the tax cuts did not pass with support from every senator last session. They said they will work to try to persuade their colleagues and members of public to gain traction for the upcoming session.

"We believe that this is a necessary first step of generating revenue and (maintaining) tax fairness for middle-class Mississippians," Blount said.