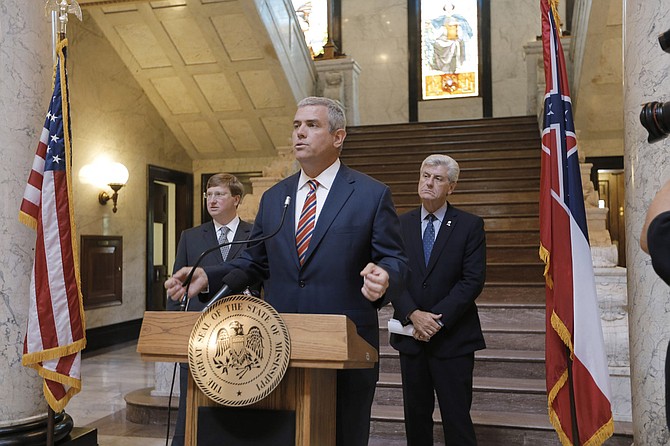 Gunn said working groups will examine the state's tax code as well as state-agency expenditures to make sure they are staying within their means.

"Are we being efficient?" he said Thursday. "Are those expenditures consistent with the priorities that we have as conservative leaders?"

"What we favor is tax relief for citizens," Gunn said.

Lt. Gov. Reeves pointed to excessive agency expenditures on things like travel and office furniture as examples of mismanaged spending of state dollars. He told reporters when he ran for office in 2011 that there were about 30,000 state employees and a vehicle for almost one in four state agency workers.

Since 2011, Reeves said the number of vehicles in state agencies has gone down by 10 percent.

In the 2016 legislative session, lawmakers passed the Taxpayer Pay Raise Act of 2016, which cut the state's income, self-employment and franchise taxes over the next 12 years. It will divert approximately $415 million from the state's general fund.

Bryant applauded the Mississippi Legislature's decision to cut the corporate franchise tax, by phasing it out over the next 12 years.

The governor cited the Council of State Taxation and Forbes Magazine, which both praised cutting franchise taxes as a good idea. Forbes asked if it was the "best tax cut of the year" pointing out that "to the extent the franchise tax inhibits capital creation in the state, it's a bad idea."

"This is not always the narrative that the people of the state of Mississippi have an opportunity to hear—they will do so," Bryant said last week.

"I am certain the three of us (the speaker, lieutenant governor and governor) in speaking opportunities around the state, we will have to go directly to the people to inform them of the facts regarding the tax cuts that will be implemented in the state of Mississippi."

Gunn said lawmakers in the tax working group will look at the Taxpayer Pay Raise Act to see how to implement and incorporate it into the state's tax structure. 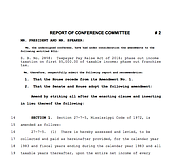 "We've got two years to do that—hopefully, we can come up with a system that incorporates (the act)," he told reporters last week.

Too Early to Have a Clue

Speaker Gunn said State of Mississippi leaders have to do budget and tax reform together and work as a team in order to see how tax reform will affect revenues. He said that while working groups will start this year, the task could continue into 2017. The tax working group will hold its first meeting Aug. 1.

Leaders will appoint more lawmakers to additional working groups before Aug. 1, a House spokeswoman said. Those groups will look at state agencies with large budgets like the Department of Transportation, the state's division of Medicaid and the Department of Health, among others.

The Legislature budgeted for a $5.79-billion fiscal-year 2017 budget (which began July 1) to match revenue estimates. The fiscal-year 2017 revenue estimates a $130 million influx to the state's general fund due to Senate Bill 2362, which made several state agencies general-fund agencies—not special-fund agencies. Sales tax and individual income taxes together make up more than 70 percent of the state's general-fund revenues, the budget bulletin from the Joint Legislative Budget Committee states.

So far in the fiscal-year 2017 budget, leaders admitted to a $56-million mistake in revenue estimates, but last week Lt. Gov. Reeves said it is still too early to predict what revenue will come in to meet the state's estimates.

"There's a lot of estimates that are made in the revenue projection process, and it is way too early in the fiscal year for us to have even a clue as to whether or not we'll meet sales taxes or income taxes (to make revenue goals)," Reeves told reporters last week.

Reeves also pointed to the state's rainy-day fund, which will still have around $300 million after Bryant dipped into it for somewhere between $50 million and $60 million to finish off fiscal-year 2016.

"We have the third-largest balance in our rainy-day fund in our state's history," Reeves said.

The working groups will have both senators and representatives in them, and Speaker Gunn said assignments were based on lawmakers' expressed interest, chairmanships or areas of expertise.

State leaders announced the assignments for the tax-review panel, but not for other working groups that will look at individual agencies. Gunn said committee chairs will likely look at their respective agencies' budgets, so for example, the transportation chairman will look at the Department of Transportation's budget.

Five Democrats serve on the 18-member tax-review panel, including Rep. Angela Cockerham, D-Magnolia, who is Energy Committee chairwoman and the chairwoman of the Legislative Black Caucus, Rep. Sonya Williams-Barnes, D-Gulfport. Most lawmakers on the tax committee serve on a finance, appropriation or revenue committee in their respective chamber.

"The real issue here is that the 'tax break legislation' favoring big corporations, which leaders said would create jobs, needs to be rescinded. It would be difficult to point to one company that has located here or said they expanded due to these corporate giveaway pieces of legislation pushed by our leaders," Moak said in a statement.

"It is time to join the rest of logical and reasonable Mississippians who believe their tax dollars should be spent on services for which they were originally taxed and not given away as campaign donation prizes to elected officials' political backers," Moak added.