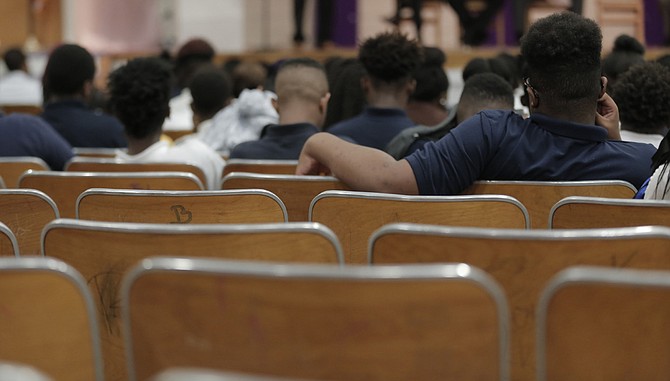 Students listen to a “Students Against Gun Violence Program” at Whitten Prepatory School on Oct. 19. Photo by Imani Khayyam.

JACKSON — When Forest Hill High School teacher Paige Watson taught 9th-grade English last year, her students read law professor Michelle Alexander's book, "The New Jim Crow: Mass Incarceration in the Age of Colorblindness," as part of a unit focusing on police brutality in light of the police-shooting deaths of unarmed black people. But in her grammar and drills-intensive English II class this year, Watson said, it is hard to be as flexible with the curriculum.

Still, Watson wanted to open the space to reflection and to dialogue for her class, mostly made up of black students, if they were willing. They were. So with a magic marker and copy paper, the students manifested a photo project using the #DontShoot hashtag made popular on Twitter, where black users took pictures of themselves and wrote captions affirming their humanity.

Many students used their pictures and affixed them to copy paper, where they wrote down their feelings. Others skipped the photo, but wrote anyway.

Watson said it was the expression that mattered.

"You are important, and your voice matters, and let's tell the world why you should be here," said the teacher, a Missouri native. "What I liked about it is, yes, we did have really poignant answers, but some of the most were so simple." An example? "#DontShoot. I have football practice later."

Watson's efforts echo a trend of classroom-led attempts around the country to deal with racial trauma, or trauma caused by direct or indirect experiences of racism and discrimination. Jackson Public Schools, which serves a population of mostly black and Latino students, already hosts events and programs that allow students a creative outlet for their feelings on race and justice, such as the Art, Poetry and Justice project. Watson wanted to facilitate these types of discussions inside her English II class, a state-tested subject.

"Police brutality is so prominent right now," Watson said. "I kind of saw a shift in my students after that. I think that they realize that my class can be so much more than this test-prep, skill-based class. We care so much about each other. Let's be activists. Let's talk about how a photo or a piece of writing can show how you're a leader and how you can show your community."

For many youth of color, even witnessing police brutality against other people of color can result in racial trauma. Kenneth V. Harvey wrote in a 2013 article for Reclaiming Children and Youth: The Journal of Emotional and Behavioral Problems that racism, which attacks children's self-value and how free they feel to speak up for themselves, "is seldom seen as contributing to these difficulties" when kids have a difficult time. "To work effectively with youth of color, we must understand, address and ultimately heal the hidden wounds of racial oppression," Harvey wrote.

Harvey found that kids who experience racial trauma in whatever form may act out, but that methods to help them "seldom" focus on racial trauma. He suggests an eight-step approach to help professionals help young people who are experiencing racial trauma, first including "affirmation and acknowledgement" of "the premise that race is a critical organizing principle in society" and, secondly, by purposefully creating a space to discuss it.

Watson says she was candid with her students about race to help put them more at ease and allow them to speak. "I'm white, I'm privileged, I don't understand the things you or your family have to face," Watson says she told her students. "If my car breaks down on the side of the road, I don't have to fear for my life."

She wants them to know it is OK to speak their truth even if she cannot fully understand what they experience. "I think they're afraid to say that cops are racist or white cops are racist because I'm white. Being a human being in front of them helps them open up and build this layer of trust."

'I Am Not Done Living'

For some students, the project did more than just alleviate stress. It made Aaliyah Holliday, 16, feel like an activist.

"The project that we did made me feel like I was making a difference by just writing #DontShoot underneath the paper. It made me feel good about being an activist. Small words can make a difference. Mine says '#DontShoot, I am not done living,'" she told the Jackson Free Press

"What was good was I had heard from voices I hadn't heard from, quiet voices who haven't had much to say about what we're reading, and giving them an opportunity to talk to each other," Watson said.

Rapheal Shinnie, 15, one of Watson's students, says that the exercise helped him open up to his classmates. "It really did help me because I'm not one to really express my feelings. Now I'll talk, I'll say something about my feelings," he told the Jackson Free Press.

"I think that it's important for other people to stand as one or see something like this because no matter your color, we should all see it. It might open up someone's eyes," De'Lonte Lewis, 15, said.

Rakiah Simmons, 15, says her class feels like a safe space; you never know what students are going through at home. "It might help other people to do what we do," she said. "We might reach out to other people who are silenced."

Sierra Mannie is an education reporting fellow with the Jackson Free Press and The Hechinger Report.