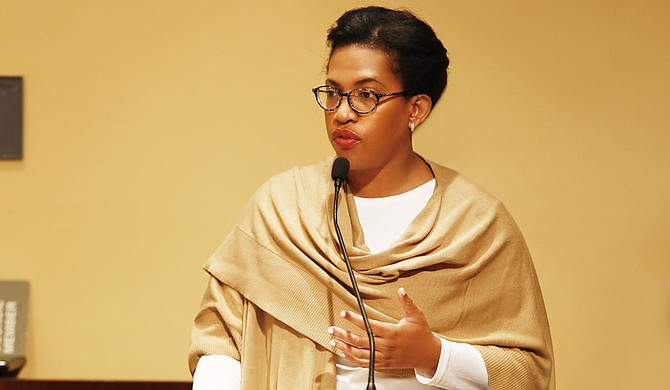 Jackson Director of Public Works Kishia Powell said that although her department is understaffed, it forces them to focus on efficiency. Photo by Imani Khayyam.

JACKSON — Lately, it is hard to separate the problems facing Jackson and the efforts by the City of Jackson's Department of Public Works to slowly piece together improvements to one of the largest, oldest infrastructure complexes in the state. Budget issues, shortfalls, and questions about contracts plague the department's every move. Kishia Powell, director of the department of public works, sat down with the Jackson Free Press on May 4 to clear the air about her constant struggle against the problems she inherited as head of the fight against potholes, water leaks, and water bill difficulties.

What's missing in the media coverage of the problems that the Public Works Department faces?

I think that people that have been here a lot longer here than I have know full well that these are not new issues that we are dealing with. And unfortunately this administration came in at a time when there were a lot of issues that had to be dealt with, and quickly, to make progress. Then you have the expectation of a sales tax that was sold as it was going to resolve all of the issues with infrastructure, and a lot of folks just don't understand that it was not going to be possible because infrastructure improvements are very expensive, and they take time.

And what I do when I talk to people is try to put things in a national context. And a lot of people don't appreciate that but I think its important because it says, this is the truth of the matter. Across the county there is a significant funding gap for every infrastructure system that we have. Water and wastewater has a $540 billion funding gap across the United States.

So it is not just the City of Jackson that is struggling with the cost of infrastructure. The city is not the only city that has a special sales tax for infrastructure improvements. So if you were to ask any other city how they use that sales tax, you'll find different answers.

Some cities decided to use the sales tax as strictly money to pay debt service because they leverage those funds, because infrastructure improvements are very expensive. Right now we are doing infrastructure improvements in cash, so pay as you go. What we stressed from the beginning of this process from the time I came on board and starting to develop the master plan was that it was going to be a lot of heavy-lifting up-front to actually develop a long-term program.

People don't see the work that has been on going since I got here. We have a very, well, very full plate with on-going projects. And the projects that are up on our capital improvement project website right now under the open data platform, those are just sales tax projects. We have to get our other on-going projects added to that list so that people see what we are actually doing.

It does seem as if infrastructure issues in Jackson have been building for quite some time. How do you plan on addressing them?

This mayor doesn't want to point fingers at anyone because it is very difficult to be in leadership when you have so many priorities that are left over. And I wasn't here then. I don't know what priorities that mayor had to deal with that (infrastructure) was not as much a priority.

This mayor happened to run on infrastructure improvements, those were part of his platform, because he knew that this was something that was very important to the city. You will hear him say all of the time that when he was young and sat in on meetings with his grandmother they were talking about the same infrastructure problems back then.

And he also gets that there is a way to develop and revive and renew a community and hang that on infrastructure, because infrastructure is an economic driver. The Secretary of Transportation for the United States of America was a Mayor in North Carolina. That was very much his approach.

He focused on infrastructure improvements, and it drove improvements and the economy, the viability of neighborhoods, making the city more resilient, attracting development to the community, so it can happen but there has to be a very intentional approach to do it in a very planned way and a way that spreads the focus across the city.

You know people laughed when we talked about "Taste the Tap," but you have to start somewhere to bring attention to the need to use tap water. Because the water system is an asset to the city and one of the other things I have explained to folks that I have come into contact with is what their water and sewer rates pay for. It pays salaries for the more than 200 individuals that we have in water and sewer. It is an enterprise that has to pay for itself.

If we do not get that funding in then we cannot provide improved service the way we want to because we are dependent upon that revenue. It's a business, nonprofit, but it's a business. And we want to run it like a business. So that means that we want to improve our response time, we want to improve our resolution time. To do that we need additional resources: human and capital resources. To get those additional resources, we have got to have the revenue and we are trying to maximize the revenue under the last rate increase. We haven't seen the revenues that we should be seeing because we are having impacts from this meter change-out program and the billing system.

Does your department have all the resources needed to address the problems?

Well, we definitely need more staff, and we definitely need new equipment, and we need funding to address the infrastructure issues. And what I always say to folks is that in a perfect world if we had all the money in the world we'd be able to get all this stuff done. The issue is not that we don't know what needs to be done or we don't know what we have to do. The issue is that we are constrained by the resources that we have, both funding and human resources. And so we are doing the best that we can with the resources that we have.

We are trying to be more efficient. This is why we are developing a strategic plan so that we make sure that we know and have a clear path to do the things that we need to do, but ultimately at the end of the day we need to grow the department. We have less folks on staff then we had before.

The 62 projects that I talked about that are on-going, and that includes sales tax projects, are funded with other sources, those projects are being managed in-between three, and now we had a recent hire, four engineers. I was told, I believe it was last week or week before last that an old public works director said, I used to have 15 engineers on staff. Well my response was, what got done? But, you had a head start, but you didn't take it.

We are understaffed, but we are still producing because I have a great staff. There is no one in this city that knows the infrastructure better than they do. And so I can never understand why the department is not taken as the subject-matter experts all the time. Why does it take other folks in other folks' ears that can so easily discount the things that we say and the things that we try to do? That's the frustrating part to get over. Because it makes the job more difficult and tedious for the limited staff that we have, when we have to spend more time fighting to do what we need to do than to just getting down to what we need to do.

Is your department subject to the city's furlough days?

We are, and I was here on furlough day. I don't get paid. Most of my managers I think are working on furlough days, not getting paid. And we have come to look at it as a day where we don't have meetings. We get stuff done.

Folks talk about Furlough Fridays, and some folks enjoy the day off, but then feel it the next Thursday. And the city will work its way out of this. I understand that it is very difficult, especially for the folks that are living check-to-check and are struggling to get by. Morale has been impacted, certainly, but by-in-large people come to work, wanting to be successful and engaged and doing what they are here to do.

I look at it as my job to make sure that everyone understands their role, are in positions or in the position to be successful in their role and feel part of the team. We have taken some lumps this year. We have had some rough spots. We have been dealing with the water theft issue and that hit close to home. But, you know, we are moving on.

I have explained to my staff that that was an example of our own folks stealing the ability for those folks that are working hard, stealing their opportunity to get raises. So we have got to recalibrate and retool. I was in Baltimore, running the bureau of water and wastewater, at the time when the City of Baltimore had to take furlough. I am not new to furloughs. You find efficiencies, and we are using as an opportunity to find efficiencies. So when that day is added back, I am hoping our production is going to be that much better.