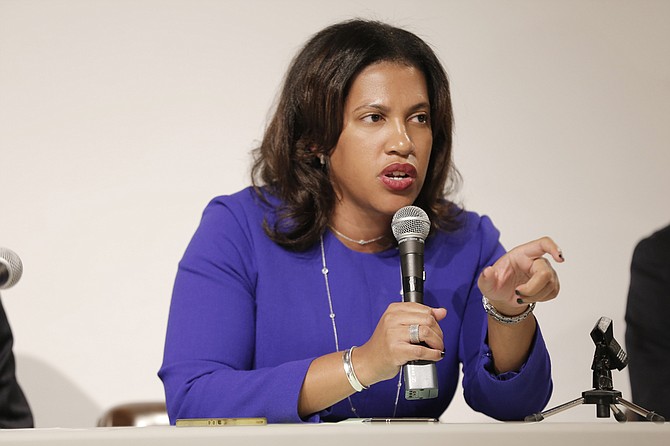 Public Works Director Kishia Powell said her team does not recommend public-works contracts based on the mayor’s political relationships. Photo by Imani Khayyam.

JACKSON — The Jackson Department of Public Works has recommended a new "sludge" contract to haul away of waste stored in the wastewater plants. An Environmental Protection Agency consent decree gives the City until 2017 to remove the waste.

"The first phase was the solids removal from the storm cells at Savannah Street," Public Works Director Kishia Powell said during a May 4 interview. "That was removed and put into those big geo-tubes that are out there. Now we have to cut those geo-tubes and dispose of it off-site."

Public Works has recommended a contract with PSI-GA LLC to haul away sludge, after issuing a second request for proposal in the fall after the city council rejected a contract with Denali-SGE twice. Council members questioned connections between the mayor and the owner of SGE, Socrates Garrett, who was his largest campaign contributor. If the administration agrees with the contract, it will be placed in front of the council for final approval.

"I don't steer," she told the Jackson Free Press. "I have specifically told our staff that our evaluations are to be our own, they are to be done based on the information in the RFP."

Powell said that she told Mayor Tony Yarber when she was hired that she was not just there "to be a figurehead," and that as a professional engineer she has to adhere to ethics requirements. "No one tells me how to evaluate and assess," Powell said. "And I expect my staff to do the same thing."

"So you have a lot of folks trying to influence various people's decisions. Not mine. I stay in a bubble, pretty much."

The contract is just one part of a larger agreement between the City and the EPA to address conditions of the wastewater facilities and "sludge" with the required completion date of late 2017.

Two proposed ordinances—to regulate guns and payday lending—would have significantly altered municipal policy, but were sidelined back into committees for more reconsideration this week.

One, the ordinance increasing the potential penalty for discharging a firearm in the city limits, went back to the Rules Committee, which met May 9. Ward 6 Councilman Tyrone Hendrix supported the ordinance, saying it would be preferable to covering up the danger for his children.

"Did you hear those fireworks?" he said, looking down as if to speak to his daughter.

The new ordinance, introduced by Ward 3 Councilman Kenneth Stokes, would include a mandatory 90 days in jail and a $1,000 fine, would communicate that discharging a firearm in the city is an act leaders take seriously, while not overstepping the statutory limits placed on municipality-based punishment.

The ordinance, however, left room for "legal" uses of a weapon in the city, addressing Ward 4 Councilman De'Keither Stamps' concerns about shooting snakes and other animals in one's yard, as well law enforcement's use of firearms.

The ordinance passed the committee unanimously and will be on the agenda for the next City Council meeting on May 17.

Stamps authored the other ordinance, to place a moratorium on check cashing, title loan, pawn shops and liquor stores in Ward 4. "I got a new notice from legal about some language that needs to be changed around," Stamps said during the council's May 2 meeting. He did not specify the questionable language.

"In some areas we have over-proliferation," Stamps said during the April 25 Planning Committee meeting, describing the 30-plus check-cashing storefronts on Ellis Avenue. He said then that the moratorium would give city leaders the opportunity to evaluate the priorities for zoning.

"Let's pause and see how we want these areas to work together," Stamps said.

A resolution honoring the Jackson City Clerk's office passed the Council unanimously during the May 3 meeting with a standing ovation to the oldest office of the city government.

"Y'all do all the work," Ward 4 Councilman De'Keither Stamps said.   "We just talk a lot."

The Council recognized City Clerk Kristi Moore and her staff during Clerk’s Week.

City Clerk Kristi Moore and her staff took a picture with the council and mayor in front of the Council bench, showing off a plaque created for the occasion.

"We are on a very tight schedule," Priester said, pointing out that sometimes the clerks have to turn around important documents, like meeting minutes, on a very short deadline. "Where before that used to be an impossibility for the City of Jackson, and it caused the City of Jackson to lose money and not be able to take advantage of opportunities, the Clerk's office now ... they get it done."

Priester highlighted the Clerk's integration of new software to allow citizens to request documents without a visit to City Hall. "I too wanted to express your thanks for what you do, not only for the Council but also for the City," Ward 7 Councilwoman Margaret Barrett-Simon said.

Ward 3 Councilman Kenneth Stokes said that the Clerk's office of today is an improvement over the clerks of the past.

"We can remember the time, Councilmember Barrett, when the City Clerk's office used to put out material with misspellings and everything else," Stokes said. "The Clerk's office are special, hard workers, and we are just thankful for the staff."

Mayor Tony Yarber praised the resilience of the office to mediate between the different branches of the government during his own proclamation, calling their office the "front door of the city."

"I'm really impressed with y'all's ability to work between the administration and the city council," Yarber said. "I know you work for the city council, but I never at any point feel like there are any problems created because of that dynamic."

"So I just wanted to thank you for your extreme professionalism and your ability to be able to meander through seven bosses and all of the things that happen in the couple of floors above you," Yarber said.

At Odds Over 1-Percent Tax

Mayor Tony Yarber and a member of the 1-percent sales-tax commission disagree over whether or not the City of Jackson can leverage the funds to pay for loans to address crumbling and dilapidated water and sewer infrastructure.

Yarber believes the City can use 1-percent sales-tax revenue to pay off some of the $11-million revolving loan from the State for water needs. The bulk of the loan is allocated for capital improvements at both of the water plants, to replace cast-iron pipes and to finish construction of a water line at O.B. Curtis. The Jackson City Council approved the loan May 3, and the Mississippi Department of Health will facilitate.

When asked if the plan was to use water-sewer revenue to pay the amount due on the loan, Yarber was clear about his intent to use 1 percent funds.

"To be honest with you," Yarber said, "it was never a question of whether not we would use water-sewer funds. It was always the idea that we would go back and use 1 percent (money)."

"Inherently, that's the issue with the commission. There's this idea that the commission is responsible for approving blobs of money at a time. And that is wrong," Yarber said. "There have been some issues on the commission as to understanding the role. The commission's only role is to approve a master plan."

"So right now, to some degree, the commission is acting like the Council, when ultimately that's not how that is supposed to work. And we are going to fix that," the mayor added.

On the other side of the debate is James "Pete" Perry, the chairman of the Hinds County Republican Party, who Gov. Phil Bryant appointed to the commission. Perry believes the mayor is trying to out-step the authority of the City to dictate how the funds can be used.

"And unless the commission came and voted to put it in a master plan and then approved it as an expenditure, I don't believe they can touch the 1-percent money to do it, and I don't believe the state will loan that money without such an approval," Perry continued.

"Because the state is going to look at how are you going to pay it back."