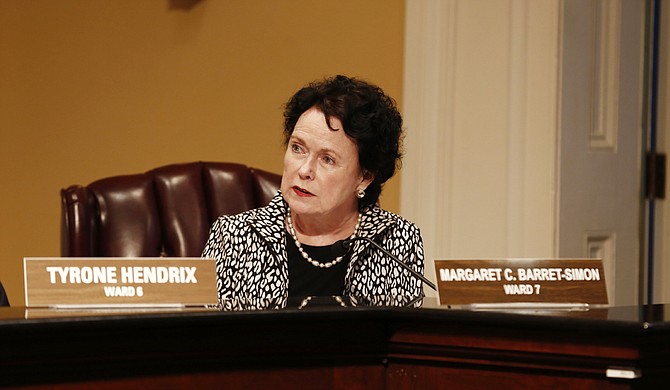 Ward 7 City Councilwoman Margaret Barrett-Simon openly questioned whether the mayor and City administration officials are intentionally hiding information about the budget numbers with the council. Photo by Imani Khayyam.

Jackson City Council members today accused Mayor Tony Yarber and his administration of concealing information that could show whether or not the City's budget reserves are depleted.

"This is just basic information," Priester said at a special council meeting this morning to discuss the budget and the City's sludge contract. "The administration has the data. They are purposefully refusing to give basic information to the council that portrays them in a bad light, that portrays him in the light that they do not have the ability to control their budgets and have basic management oversight."

Ward 7 Councilwoman Margaret Barrett-Simon agreed. "I think it's incumbent upon the administration to respond to this, this morning," Barrett-Simon said. "My question is how in the world when we have set the reserve by ordinance many years ago, you remember Mr. Crisler, that that could be depleted to the point that it is right now."

The ordinance Barrett-Simon referenced was passed in 2004, requiring the City to maintain an "Unrestricted General Fund Reserve (that) will be 7.5 percent of the adopted General Fund operating revenues." This reserve is an emergency fund for the city, one of two lifelines that the City can use to address unforeseen expenditures as well as the fallout from any unpredictable disasters, as it was used in the past to deal with hurricanes including Katrina. The other is the general fund balance, which is a fund carried over each year from what is left over from expenses.

"We did this many years ago to ensure the financial stability of the city, and if this has been violated, that's a very, very serious situation," Barrett-Simon said.

"I am going to cut to the chase," Council President Melvin Priester Jr. said to the mayor's representative, Deputy Chief Administrative Officer Marshand Crisler, to open the meeting.

"Mr. Crisler, is it true that the City has spent all of its unencumbered general-fund balance and spent more than 4 million of its emergency 7.5 (percent reserve)?" Priester asked. "Mr. President, as I was indicating online before the meeting was called to order," Crisler said, "I had a ... conversation with the mayor about the agenda today, and he was under the impression and gave me the impression that we were going to be talking about the briefing concerning the contractual portion of the public works ... the consent decree and the sludge contract."

Still, Crisler said the mayor was aware that the budget question may come up.

"And at this point, the mayor did indicate that if the issue came up about the fund balance, and the budget as a whole and the audit, that he respectfully requests that he be given the opportunity to be present at the meeting and that we would recess that meeting until that be done."

"So right now we don't have anyone from the administration here to discuss that portion of the agenda," Crisler said.

The mayor called the meeting to discuss the sludge contract that is necessary to fulfill an Environmental Protection Agency-mandated consent decree, and the council added the budget discussion to the meeting, Priester explained, adding that the agenda was posted Thursday of last week.

"The administration is not willing to speak at this time regarding whether or not it's true we have a reserve deficiency for fiscal-year '14, '15 and '15, '16," Priester said.

"At this point we are not prepared to talk about the fund balance of the budget as a whole today," Crisler said. "As you indicated, Mr. President, it was noticed on Thursday, this meeting with the Rankin County Flood Control (Levee Board) has already been on his calendar, so it would take him out of play."

"As I understand it, he was prepared to do a briefing with you all, prior to the notice even being given out, on what we were supposed to discuss here today, on contractual matters," Crisler said.

Others on the council, along with Priester, did not believe that this was a satisfactory answer to the mayor's absence.

"If the mayor wants to continue to ostrich, that's on him, we need to know how much money is in our reserve," Priester said. "We need to be able to have good information that the council has been requesting for months at this point."

"I think it's incumbent upon the administration to respond to this, this morning," Ward 7 Councilwoman Margaret Barrett-Simon said. "My question is how in the world when we have set the reserve by ordinance many years ago, you remember Mr. Crisler, that that could be depleted to the point that it is right now."

The ordinance that Barrett-Simon referenced was passed in 2004, requiring the City to maintain an "Unrestricted General Fund Reserve will be 7.5 percent of the adopted General Fund operating revenues." This reserve, along with an emergency fund, is the two lifelines that the City has to address unforeseen expenditures as well as the fallout from any unpredictable disasters, as it was used in the past to deal with hurricanes including Katrina.

"We did this many years ago to ensure the financial stability of the city, and if this has been violated, that's a very, very serious situation," Barrett-Simon said.

Crisler said that the administration asked for the meeting and expected to address its own agenda items, although the council can adjust or add to the agenda as it sees fit. The sludge contract, that was on the agenda, is set to cost millions of dollars, and if the City cannot meet an EPA-set deadline in 2017 it could be subject to financial penalties.

"I understand the position that you are in," Ward 6 Councilman Tyrone Hendrix said to Crisler. He said that "it is extremely important" for the council to know more details about the budget if it is going to make decisions about the consent-decree contracts. "I don't see how we move forward with even discussing a contract if we don't know where we are with our revenue and expenses in particular in terms of our fund balance and our reserve amounts."

"Maybe we can't afford to pay for it if we don't know where we are," Hendrix said.

Although Crisler kept attempting to push for the consent-decree sludge removal contract, Priester and the council wanted to recess until a representative from the City, preferably the mayor, could address the general-fund balance.

"We have been asking about just basic management questions," Priester said. "The mayor has made it abundantly clear that he has the ability to get the information he wants heard across, and here it is that we have some of the most pressing financial information the City needs. ... I refuse to believe that the mayor doesn't know how much our expenses are."

Barrett-Simon said she felt bad for Crisler and other representatives of the mayor's office.

"You are employees of the City; you are not just employees of the mayor," Barrett-Simon said. "And it is just terrible that you were put in this position of not being able to give us facts even through you know the situation is this morning."

"I would refuse to work for somebody that put me in this position."

Barrett-Simon said after the meeting that she had never seen this before in her time on the City Council, at least "nothing this blatant."

Ward 1 Councilman Ashby Foote said that it was unsatisfactory that the administration was not ready to address the agenda items, and that if they were going to recess, it be with all the information ready.

"If we are meeting at a later time, we need to meet with the facts," Foote said.

The Council closed the meeting, and Crisler said he would contact the Mayor right after the meeting. There was a tentative time for 1 p.m. today set, although it was clear that it might change.

"It seems to me that we will get no commitment to have the people that need to be here at 1," Priester said, adjourning the meeting and indicating that they would set a meeting before the end of the week. "And I cannot speak for other council people, but I am not voting for a single claims docket until I get information about whether or not we actually have a reserve deficiency and if we have any fund balance left."

UPDATE: Almost an hour after the meeting adjourned, Mayor Tony Yarber, through his communications director Shelia Byrd, issued a statement that indicated that there had been some discussions between Council President Melvin Priester and himself concerning the content of the meeting.

"I initially requested a meeting to discuss upcoming infrastructure improvement projects underway in the City of Jackson, but was later noticed by Council President Melvin Priester that the meeting would also include budget discussions," the statement from Yarber said. "I then requested a separate meeting to address the budget issue as it is a topic the Administration wants to discuss at length."

"The Council set today's meeting time and it conflicted with the Rankin-Hinds Flood Control meeting, which I had to attend. While it would appear some Council members are in campaign mode, the Administration is focused on the numerous paving projects that have begun in the City of Jackson. We wanted to update the Council on those projects and the impact the work will have on citizens and the community. We will not allow our road work progress to be overshadowed by political ploys attempting to shift the conversation."

"Of course," the statement said, "the Administration will provide the requested budget information to the Council. We have been forecasting the City's budget concerns for the past two years."