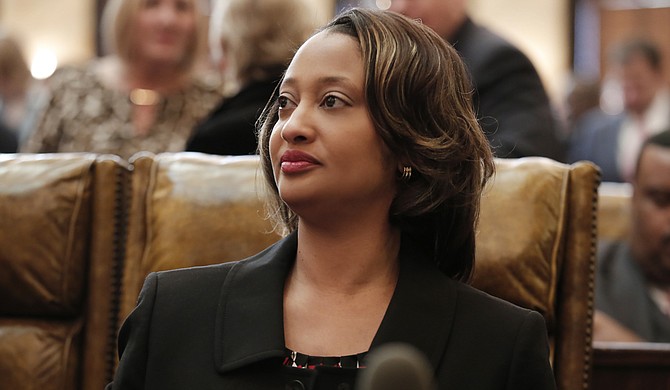 Rep. Kimberly Campbell, D-Jackson, stood with her Democratic colleagues by demanding that House Republicans vote down the airport “takeover” bill on March 24. “I pack a mighty punch,” she promised. Photo by Imani Khayyam.

The black and Democratic caucuses did not pull punches in testimony against the Jackson airport "takeover" bill that passed the Mississippi House March 24, including attempts to modify the legislation with eight amendments that all failed.

After Rep. Mark Baker, R-Brandon, introduced the bill, Rep. Earle Banks, D-Hinds, was the first to speak in opposition, outlining the core of the arguments that would be used the rest of the afternoon.

"This has been a very controversial bill," Rep. Banks told the chamber.

Banks said a new low-cost carrier would be hard to lure if the bill passed and the airport ends up tied in litigation, making the situation unattractive to businesses.

"This is not good legislation; this goes back to Jim Crow legislation," Banks said.

The majority-Republican House erupted into hisses, forcing Speaker Philip Gunn, R-Jackson, to bang his gavel to restore some semblance of order.

After the opposition's time expired, several Democrats tried to amend the bill, eight amendments in total, that eventually failed to pass but revealed more of the issues at the core of the airport discussion.

In the third amendment, Rep. Robert Johnson, D-Natchez, sought to adjust representation to "not less than five of the commissioners shall be African American."

Baker, in response, said it was leading the discussion, "down the wrong road," insisting the airport bill was not about race.

Rep. Kathy Sykes, D-Jackson, introduced an amendment to whittle the board down to five members with all appointed by the mayor as they are at the moment. It failed.

Rep. Adrienne Wooten, D-Ridgeland, introduced an amendment to create a task force to study the airport to give the House a clearer picture and more information for discussion. It also failed as did her subsequent amendment to repay the City of Jackson a grand total of $96 million for the land, stating "give me my 40 acres and a mule."

The last amendment, introduced by Rep. Bryant Clark, D-Holmes, suggested that since a member of the governing board as outlined in the legislation would be from Madison, the Bruce Campbell Airfield in Madison should also be included in the "takeover" bill. This amendment, like other attempts to alter the bill, failed along the same voting lines.

'I Pack a Mighty Punch'

After the amendments failed, the House discussion turned to comments from the Democratic caucus, with promises to return the same consideration Republicans have shown them in the future.

Rep. Kimberly Campbell, D-Hinds, began her opposition to the bill by stating that during her tenure, she had never spoken about a bill before. She said she felt that even though she had supported other representatives' bills, she was not receiving the same consideration in this discussion.

"The one time I go to ask for something, for some favor, people tell me no," Campbell said. "For something that belongs to me, my community."

"I may be small, but I pack a mighty punch. I believe in doing what's right. I've been fair to you. Now I'm sure that you won't return the favor, but at least you won't be able to tell the lie that I didn't make you remember those votes that I took for you."

Rep. Wooten began her comments by describing herself as a young girl, picked on and teased. She said that because she was picked on, that after a while she "started acting out."

"Any time that a person feels like they are being picked on, anyone that has any backbone will spring back," Wooten said. "You put them in a corner, and they start fighting back."

Wooten said those qualities have transferred down the years to her now, in her defense of the airport.

Rep. Wooten accused senators of ulterior motives: "I look at the individuals that have a direct interest in this passing. Folks like Senator Harkins, who has authored this legislation. You are a real-estate agent. You've got property for sale right by the airport," she said.

(Harkins, who owns and lists property in the area, has denied that he presented the airport bill in his own self-interest.)

"So let me bring it around to you: that property that that airport sits on is from the hard work, blood, sweat and tears of the City of Jackson."

"Now for you all sitting out there who think that its right, or just don't care," Wooten said, reminding the body of what Campbell said about the importance of the Democrats' votes to break gridlocks. "Let's see if you can count on that one vote again."

Wooten reminded the Republicans of their vocal commitment to preventing eminent domain. "No business, no person, has the right to come and take from you what you have worked so hard for," she said. "You are trying to come in here like a bully and take what is not yours."