Protesters Against Anti-LGBT Bill Shout Down Mississippi Legislators at Rally 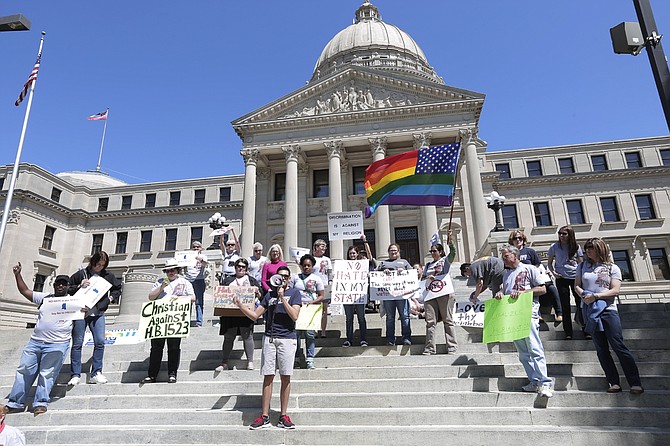 Protestors gather on the steps of the Capitol to rally against the passage of HB 1523, which would make discriminating against the LGBTQIA community legal. Photo by Imani Khayyam.

JACKSON — Nykolas Alford and his fiancé, Stephen Thomas, have been engaged for two years—going on three in December, Thomas says. They stood together on the steps of the Mississippi Capitol today among a modest crowd to protest HB 1523, House Speaker Philip Gunn’s bill that would establish the Protecting Freedom of Conscience from Government Discrimination Act.

Should the bill become law, citizens who don’t feel morally or religiously obliged to serve members of the LGBT community would not be held accountable for discriminating against those groups; punishing them for refusing service to LGBT communities would become a form of religious discrimination itself.

Medical professionals could be absolved from discrimination for refusing to perform sexual reassignment surgery and providing counseling to people who don’t adhere to an established gender binary under the law. Employers would not be cited for discrimination for refusing to hire members of the LGBT community. State employees could refuse to issue marriage licenses to people attempting to marry an individual of the same sex, which the bill also conflates with gender identity. It would also allow religious groups that advertise foster-care services the freedom to refuse same-sex couples the ability to adopt children.

“This (bill) is like Jim Crow for the gays,” Alford said before the crowd.

The crowd consisted of members of the LGBT community, those who referred to themselves as allies of the community and representatives from the Mississippi offices of the American Civil Liberties Union, Human Rights Campaign, Planned Parenthood and National Association for the Advancement of Colored People. One individual from Brandon who self-identified as queer is seeking ordainment at Galloway United Methodist Church, right across the street from the Capitol building. Protesters held signs and yelled at legislators as they passed.

Rep. Dan Eubanks, R-Walls, who supported the bill as it passed the House, did not respond to shouts from the crowd from across the Capitol lawn, but other legislators yelled back.

“We haven’t even voted, yet!” Sen. Charles Younger, R-Columbus, shouted at the protesters who acknowledged him and a group of other legislators as they left the Capitol, shrugging and laughing at the yells of the protesters.

“Vote the right way!” the crowd chanted back.

For states like Georgia and North Carolina, the “right” way meant vetoing similar legislation after businesses such as Disney threatened to remove their business or suspend filming in the state ever again.

“This (bill) is a job killer. It’s definitely not a job getter,” said Rob Hill, state director of HRC Mississippi. Hill said that the bill could¬ potentially negatively affect the recruitment of businesses with anti-discrimination policies to the state.

But as Alford acknowledged, the bill isn’t just about businesses or the image of the state of Mississippi, but the direct impact it will have on the lives of the LGBT community. Alford says that although he and his fiancé have the support of their families and friends, and even their Episcopalian church in Meridian, that’s not reality for many members of the community, especially trans people.

“I hate that they have legislation against those friends,” Thomas said, speaking about a friend of his who is a trans woman now living in Atlanta. “I’ve seen how they’ve been treated firsthand. They’re not given the option to be the people who they want to be.”

“I don’t believe beliefs or opinion should be put into legislation,” Thomas continued. “Who is God? And right now, they think they’re the gods,” Thomas said, gesturing toward the Capitol.

“I’m fortunate enough not to have that discrimination,” Alford said. “This is not just about me, and I wish more people who feel that way would be out here. A lot of people aren’t focused on getting married right now, having a child right now, focusing and transitioning and becoming a woman right now. It’s not just about them. It’s about the people who it directly affects. The gentlemen earlier from Hattiesburg who spoke about him and his husband having to spend so much money, just trying to be fathers to their son—that is a tragic situation. I don’t have that situation. If I did, it would be tragic for me, too. It’s not just about what I go through and what my story is; it’s about Mississippi as a whole.

“Yes, I’m a black man, I’m gay, I’m a college student and everything else about me, but it’s bigger than that. We’re all equal, supposedly. My tax money should not be going towards discriminating against myself."