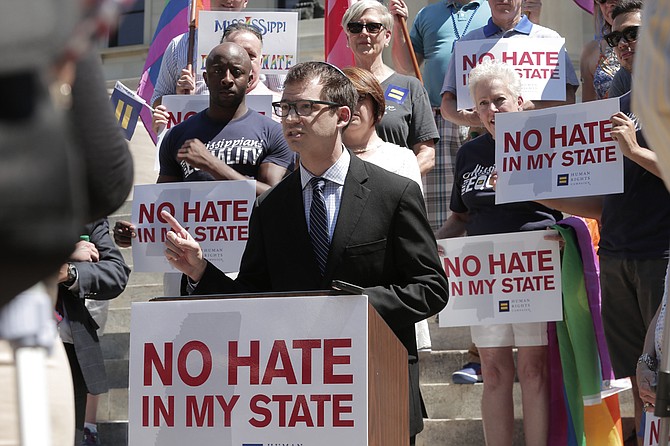 Rabbi Jeremy Simons showed up at the Mississippi Capitol to speak against House Bill 1523 the morning after Judge Carlton Reeves struck it down. Photo by Imani Khayyam.

JACKSON — Rabbi Jeremy Simons knows his Bible too well to lend credence to people who cherry-pick verses to use it to support House Bill 1523, a law that many criticize as discriminatory against the LGBT community.

"If you read those very same pages of the Bible, you will read the commandment: 'You shall not oppress the stranger,'" Simons said at a rally at the state capitol just hours after U.S. District Court of the Southern District of Mississippi Judge Carlton Reeves blocked the bill from taking effect.

But with five years of seminary under his belt, Simons says, he has counted the many ways that the Bible tells its adherents not to oppress others. A member of the Union for Reform Judaism, which for decades has advocated for inclusive treatment of LGBT people, Simons stands firmly against HB 1523.

Simons stood on the steps of the capitol, speaking in turn with representatives from the NAACP, ACLU and other community stakeholders celebrating Reeves' ruling on HB 1523. The rabbi spoke to the religious hypocrisy of the bill.

"A stranger is not simply someone who doesn't live in your community. A stranger in the biblical sense is anybody who is a minority, anybody who is vulnerable. Anybody who could be the victim of oppression, you shall not oppress. ... This is not about religion," Simons said. "This is about bigotry."

In a 60-page opinion, Reeves discussed the discriminatory impact the bill would have on the LGBT community in Mississippi, saying that the "title, text and history of HB 1523 indicate that the bill was the State's attempt to put LGBT citizens back in their place after Obergefell," the case that made it legal for couples to have legally protected same-sex marriages.

"Religious freedom was one of the building blocks of this great nation, and after the nation was torn apart, the guarantee of equal protection under law was used to stitch it back together," Reeves wrote.

"But HB 1523 does not honor that tradition of religion freedom, nor does it respect the equal dignity of all of Mississippi's citizens. It must be enjoined."

Roberta Kaplan is a New York-based attorney representing the Campaign for Southern Equality in one of the cases against HB 1523 in the state; she also served as the lawyer in the landmark United States v. Windsor case that repealed Section 3 of the Defense of Marriage Act, forcing the federal government to recognize same-sex marriages as legal. She told the Jackson Free Press Friday that she was "elated" at the injunction, but that it wasn't a surprise.

"When you come back to the founding principles of this country, one of the most important ones is the idea that unlike in Europe and unlike, frankly, some of the early colonists who had really violent debates about matters of Christian beliefs, that the right thing for the government to do and the way to have a more perfect union is for the government to stay out of those debates," Kaplan said.

"In passing this law, the Mississippi government sought to take sides in matters religious people have very strong disagreements about today on both sides of this issue," she said. "And if there's anything that violates the establishment clause, it's doing that."

Local attorney Rob McDuff argued against HB 1523 in Barber v. Bryant in a joint hearing before Reeves last week on behalf of a number of religious and community leaders along with Kaplan and the Campaign for Southern Equality v. Bryant case. He and those plaintiffs released a statement applauding Reeves' decision to stop HB 1523.

"The federal court's decision recognizes that religious freedom can be preserved along with equal rights for all people regardless of race, religion, or sexual orientation. Because HB 1523 was discriminatory, Judge Reeves properly held that it is unconstitutional. It is now time for all of us, as Mississippian to move beyond division and come together in the ongoing pursuit of a society that respects the rights of everyone," McDuff said in the statement.

Predictably, the injunction upset Gov. Phil Bryant, who said in a statement he looks forward to an "aggressive appeal" of the decision, the Associated Press reported. Kaplan, however, says though that the ball is in the state's court, she is "very comfortable" Reeves' decision will be affirmed on appeal.

Matt Steffey, professor of constitutional law at Mississippi College, told the Jackson Free Press that the defendants could appeal the injunction on the law to the 5th U.S. Circuit Court of Appeals.   If overturned there, an outcome he said would be unlikely, the case would then return to Reeves' courtroom.

Human Rights Campaign of Mississippi Executive Director Rob Hill emphasized, however, that though it is a huge victory, the sigh of relief is temporary. After the rally, Hill told the Jackson Free Press that the fight is not exactly over.

"We're still in legal limbo at this point until the federal courts decide," he said. "The best way to do that is to call the legislators back and introduce a full repeal of HB 1523. It's the only way we'll feel completely safe."

Hill said he would love it if the governor called a special session in order to repeal the law. "The governor called the legislators back to fix the mess they created with the budget," he said. "They've created a mess here."

"This puts an unnecessary target on LGBTQ people's backs in our state," Hill said. "They need to come back to this house, and they need to fix it and repeal this bill."

Mississippi Attorney General Jim Hood, the only statewide elected Democrat and who is named as a defendant, released a statement Friday morning saying he is not sure his office would continue to defend HB 1523.

"The fact is that the churchgoing public was duped into believing that HB1523 protected religious freedoms. Our state leaders attempted to mislead pastors into believing that if this bill were not passed, they would have to preside over gay wedding ceremonies," the attorney general wrote

No court case has ever said a pastor did not have discretion to refuse to marry any couple for any reason. I hate to see politicians continue to prey on people who pray, go to church, follow the law and help their fellow man."

House Speaker Philip Gunn, R-Clinton, released a statement saying that he was "disappointed" in the ruling. "We felt like this was a good bill, protecting religious beliefs and the rights of the LGBT community," he tweeted.

Read the JFP's award-winning coverage of House Bill 1523 and the fight for LGBT rights in Mississippi at jacksonfree press.com/lgbt.