Transparency in the City 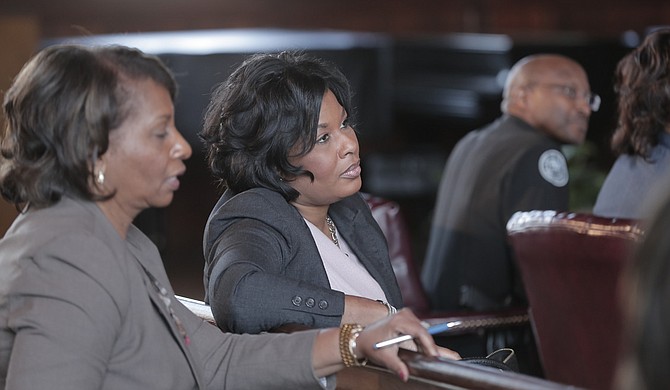 City Clerk Kristi Moore manages the public-records request process but sometimes has trouble getting timely responses from the departments. Photo by Imani Khayyam.

JACKSON — Several new technology additions to the City of Jackson will hopefully open up the records of a municipality that has of late been plagued by what some city leaders called "hiccups." This pattern led the Jackson City Council to pass a resolution of support on March 22 for the city clerk's office to help her and her staff retrieve documents from other city departments.

"In light of recent hiccups with open-records requests ... this is something that is important. ... (We must) reach out to the public and administration and say, look, let's get better at this," Council President Melvin Priester Jr. said of the resolution. "When I say that we have had some recent hiccups, I think that is an example of one where we didn't get documents to the requesting party in a timely manner."

These "hiccups" include tardy or unfulfilled public-records requests and place the city potentially in violation of laws guaranteeing timely access to public files. City Clerk Kristi Moore manages that process but sometimes has trouble getting timely responses from the departments. One step that the Clerk's office has taken recently to facilitate the process, has been integration of a web-based portal that enables citizens to apply and check on the status of their public-records requests online, any time of the day or night.

Moore explained her challenge during a discussion in the lobby of her City Hall office in front of the computers she has set out for the public to use to file requests. The system, she said, allows her to immediately comply with public-records requests, if her office is in possession of the record at the time.

Otherwise, Moore said, she has to go and get it from another department. Sometimes the person with whom the information was trusted has been transferred or let go, without any system for ensuring that the information can be found afterward. So then her office is left on the hook for the request, waiting for the department to find and provide the information.

In the administrative structure of the City, the clerk's office is under the authority of the city council, which appoints the city clerk. A majority of the departments that the clerk has to pull records from, including public works and public safety, exist in a separate wing of the government: the mayoral administration.

So when the clerks are inundated with requests about certain types of information that is located within a department that does not readily have access to the documents or cannot locate them, the clerk is left with little to no recourse. The clerk must then wait for the department, with no teeth to enforce the records request, or continue to search through the different departments to find the documents.

Sometimes, Moore said during a transparency committee meeting on March 21, the person with whom the information was stored has left their office, without leaving indication of where the information could be found. These sorts of deadends leave the City looking disorganized, plus the possibility for punitive repercussions from agencies outside the City for consistent and persistent unfulfilled requests.

"We face that now sometimes, where a person can be gone, and we don't know, and we have been shooting them emails about an open record, and somebody says, 'Oh, they don't work here anymore,'" Moore said. "And then the seven days has been exhausted because we have been sending to that email (address)."

The City will unveil a new data-driven website on April 1 that is funded by Bloomberg Philanthropies' "What Works Cities." Jackson joins Chattanooga, Tenn., Little Rock, Ark., and Kansas City, Mo., as well as more than 100 other cities that are using support from the foundation to expand their capability to weave modern technology into each city's systems.

Jackson plans to use its system to circumvent barriers between departments for the benefit of the public but hopefully to allow those within the City itself to have access to cross-departmental information.

"The lack of institutional knowledge kills cities," Justin Bruce, director of innovation and performance for the City, said during the March 21 meeting.

The City's transparency website will open with data sets from some of the most popular and sought-after information in the City's possession, including up-to-date data about crime and public works using software that will "crawl" the city system, updating without the need of a person to input the information by hand.

Citizens will be able to visualize the data with maps or graphs, enabling them to see crime in their neighborhood, how that crime has changed over time and even how individual incidents were resolved. "It's really not just to push information out to the public," Bruce said. "It's to make sure that we are operating efficiently inside. We are trying to be transparent, to be honest. And it hurts."

Pages will be dedicated to projects that the administration holds dear, and their performance will be traced in real time in the "dashboards." Bruce said that while it is going to be healthy for the City to have more transparency about its deficiencies, that it should also showcase its successes.

However, for Moore and others, it is more important that the information presented is true and correct.

"I think that the most important thing about records, to me, is feeling like the data is true," Moore said.