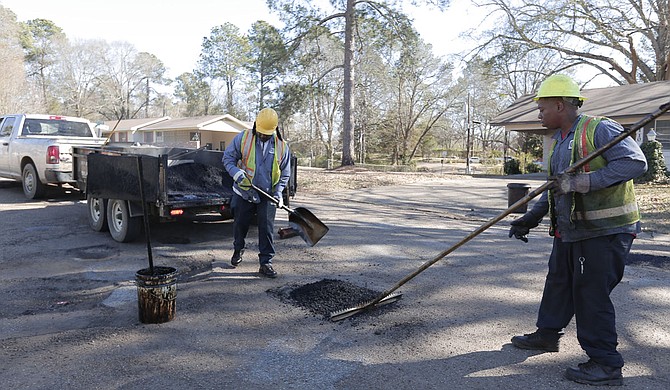 The City allocated just over $2 million to streets in the recent budget, but sinkholes, utility cuts, cracks, ruts, and potholes come in every shape, size and depth imaginable. Photo by Imani Khayyam.

JACKSON — The committee in charge of the Operation: Orange Cone initiative, funded by the 1-percent sales-tax program, has given the go-ahead to begin work on several of the city’s most worn-down streets, with a total project budget of $9 million. However, it is still unclear which streets the work is starting on, even though the City had promised on its website that "a final decision on which streets will be resurfaced will be made" at today's meeting. 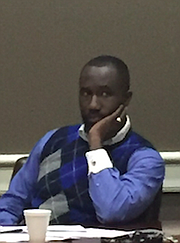 Mayor Tony Yarber listens as the Operation Orange Cone committee goes over an outdated list of possible streets on March 16.

“As a commission we would give go-ahead; however, the contingency is that prior to any milling being done, there has to be certification … that those streets are in condition to be resurfaced,” Mayor Tony Yarber said at the meeting this morning in the Hood Building downtown. “The problem that we have solved is that we are not resurfacing streets that have already been done.”

The mayor said the Public Works Department would have the “flexibility” to change the list of Operation Orange Cone streets determined to be in need of work based on the work crews’ observation at the time. This is because the list of streets used at today’s meeting was around two to three years old with some of the streets lacking a properly updated grading recommendation.

The City was hesitant, as were the engineers who had assembled the list being used at today’s meeting, to release the list as they felt that the streets on it, along with their potentially incorrect “grading” measurements, would be misleading. The City, thus, declined to release the outdated list of streets to media.

Eventually, the committee, made up of citizens from each ward, voted unanimously to approve a motion to begin work on roads graded below a certain level, 300, while simultaneously working on what they termed a “windshield test” of other streets on the list. That means city workers identify street needing work as they drive around and look at them through their windshields. This would enable the work crews to move on from streets that have already been resurfaced.

For example, one of the City’s engineers, Robert Lee, said Roach Street in front of the Standard Life building was below 300. The group questioned what the ratings, such as 300, meant, indicating confusion over both how streets are prioritized and concern over the order of repairs.

In response, Yarber assured members that while there would be disagreement over how the money would be spent, at least the work would begin. The City can alter which streets it prioritizes as the work unfolds, he said.

“We can still start with our 300 or below streets,” Yarber said. “It doesn’t preclude work from happening.”

The committee also has to choose five major thoroughfares to be repaired with a separate $5 million allotment from the sales tax. Engineers proposed Northside Drive, McRaven Road, Raymond Road, Gallatin Street and Ridgewood Road. After discussion and dissention over whether or not those roads were the ones that needed the work most, the committee decided to review the qualifications of those streets over others and adjourned.

The committee meets every two weeks.