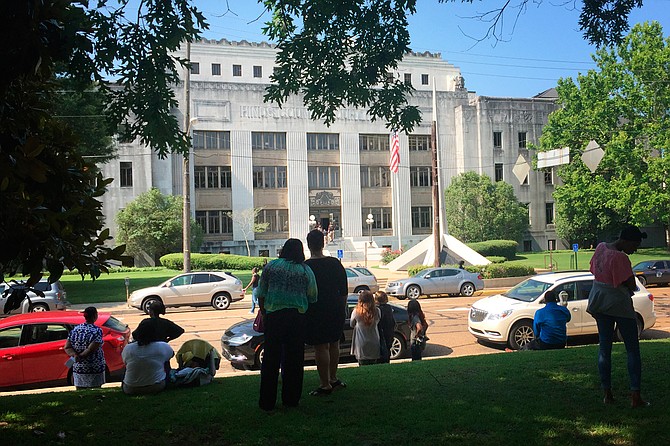 County employees and members of the public wait for the all-clear from Hinds County Sheriff's deputies as they search for explosives after a bomb threat Thursday morning. Photo by Tim Summers Jr..

JACKSON — UPDATE: The Hinds County Sheriff's Office representative has confirmed that there was no bomb found in either the Hinds County Courthouse or the Chancery Clerk building next to it.

Moments after the Hinds County circuit clerk explained that he could not produce documents supporting Hinds County District Attorney Robert Shuler Smith's counter-accusations against Attorney General Jim Hood's office, deputies swarmed the bottom floor of the courthouse, ushering everyone out of the building.

Later in the afternoon, the Hinds County Sheriff's Office sent out a press release stating that a caller into the Jackson television station WLBT-TV3 claimed to have placed a bomb outside Hinds County District Attorney Robert Shuler Smith's office on the second floor of the Hinds County Courthouse and another bomb inside the office of Special Magistrate Judge Faye Peterson in the Hinds County Chancery Court building. 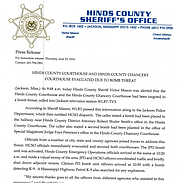 Judges, county employees and the public stood in the hot sun this morning, as Hinds County sheriff's deputies swept the county courthouse for explosives.

Before the building was evacuated, Circuit Clerk Zack Wallace addressed a response from Hinds County District Attorney Robert Shuler Smith released yesterday that alleged the charges from Hood's office were the result of subpoenas Smith issued through the grand jury on employees from Hood's office.

Smith is charged with six counts of aiding criminal defendants by Hood's office as the result of an investigation that included the FBI. If convicted, he would have to vacate his office and face a fine of $500.

Smith stated in the release that Lee McDivitt, the AG's investigator, "is the same investigator who had been served with a subpoena to appear before a Hinds County grand jury related to an investigation by the Hinds County district attorney regarding improper and illegal activities by certain state officials." 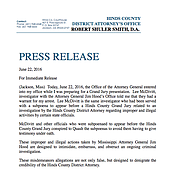 Wallace, moments before deputies appeared, said that either the documents were sealed within a related order, or that he was not aware of their existence. This leaves the existence of Smith's allegations unverified, for the moment.

"McDivitt and other officials who were subpoenaed to appear before the Hinds County grand jury conspired to quash the subpoenas to avoid them having to give testimony under oath," Smith's release states.

As of press time, the courthouse was still locked down. The building was deemed safe later from after Clinton Police Department bomb unit officers swept the building with a K-9 unit.

"My sincere thanks goes to all the officers from the different agencies who assisted in this emergency," Sheriff Victor Mason said in the press release. "Going forward, investigators will work to determine the origin of the initial call."

"Anyone with information regarding this threat, please contact my office at 601-974-2900," Mason said.