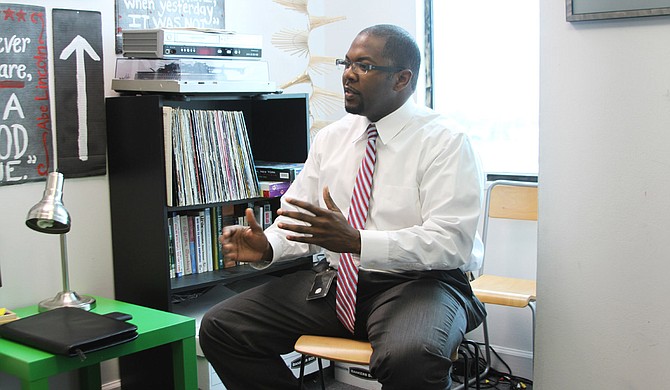 Synarus Green, who works as a legislative liaison for the City of Jackson, is running to take former Rep. Kimberly Campbell’s seat. Photo by Tim Summers Jr..

JACKSON — Synarus Green is no stranger to politics. He has worked government jobs in Jackson, Hattiesburg and Washington, D.C., and has decided to run for the now-vacant District 72 seat in the Mississippi House of Representatives. The seat belonged to his mother from 1992 to 1998, but her son, now 39, says his motivations for running are not necessarily familial in nature.

"It's a thankless job, and I tell people, that's not new to me," Green said. "In law enforcement, you learn the appreciation of knowing you can do your best 12 hours of service, and tomorrow you'll still have to do 12 hours of service."

Green worked as a police officer, investigator and youth-court detective in Hattiesburg in the early 2000s, although his favorite role was being "Officer Friendly" as the outreach and community engagement officer for the department. Before he moved to Hattiesburg, Green also worked in the attorney general's office and the division of Medicaid.

Green graduated from Jackson State University in 1999 with an bachelor's degree in criminal justice and a master's in early childhood education. He also has an MBA from Millsaps College.

Green then went to work for U.S. Rep. Bennie Thompson in Washington until Chokwe Lumumba won the mayoral election in 2013, then offering Green a job as the City's chief administrative officer (CAO). After Lumumba's death, Green continued to work for the City, and today he is the director of policy and intergovernmental affairs.

Why are you running to represent District 72 in the House?

This last year in representing Jackson, and even when I was CAO before, it's been very difficult getting cities like Jackson the resources that they need, and we've worked hard with legislators and representatives and senators and local elected officials to try (to) collaborate. Campbell was elected last year, and the anticipation I had when I came in this year developing a legislative agenda was to work with the council and administration and develop a good, sound package that even with the lay of the political land at the Legislature, it would be something viable, that they could get something out of the plan.

We have a great Hinds County delegation that for the last two years I have been working to coalesce around some common ideas, and we all have those things that specifically speak to our constituencies. But I am a firm believer that there are some things that we all can agree on and even within that list, there are things that, on both sides of the aisle, we can see as a benefit to anybody. So I kind of plotted out in my mind the next four years of how we would work to build a better structure of common goals and common gains—then Campbell resigned.

It was unexpected..., and it just seemed like an excellent opportunity. ... (My slogan is) "prepared to lead, ready to serve." First, it was, "He has prepared me to lead, now I'm ready to serve Him." I genuinely believe that my unique experiences and opportunities, the level of connectivity that I have in the community, the work I've done in nonprofits and for-profits has prepared me for a very unique, difficult time both in Jackson's socioeconomic history as well as the state's.

Once the position became available and the seat was vacant, it just seemed like my next guided step, so that's kind of my "why."

What do you think District 72 needs the most?

District 72 has several public schools and we have thousands of students who are served in those public schools. Jackson, Hinds County and the state have a need for making sure that our students are provided the best educational apparatus that will yield for them the greatest opportunities. Teachers need current, relevant resources so that they can do their jobs, and MAEP (the Mississippi Adequate Education Program) needs sufficient funding.

Economic development is the next big push. Are we maintaining our jobs, recruiting new jobs and helping people to keep the jobs that they have? Education to me flows into what we're building as a civically engaged, viable workforce.

Our workforce has got to be prepared to get hired for the jobs that are needed now. And the only way they can do that is if we're providing vocational programs, giving alternative educational tracks in the public-schools system, working with STEM, and pushing kids towards engineering programs or finding kids alternatives.

Building a better workforce is not just about getting hired for the jobs today, but we've got to also be creating job-creators. The next frontier for a lot of municipalities at least for the next 20 years is going to be infrastructure, but how we deal with infrastructure today won't be the same way we deal with it in 20 years. How are we giving our schools what they need so that they're inspiring the next generation of leaders?

When big industries come to town they want to make sure there's some good churches and good places where (they) can live and buy a house and how safe is my family going to be. But where are my kids going to go to school (is) that last peg in that community. ... And I think our schools have got to become better marketing tools for us. We can't keep hitting the news as the bottom of the rung on everything, and definitely one of those things can't be education.

How would you make that happen if you were elected?

If you look at MAEP, I am a proponent of sufficient and full funding for MAEP. Making sure that schools—usually in Jackson roughly $20 (million) to $30 million is missing from the funding they would have gotten from MAEP—that type of funding has to be there. A lot of times, whatever dollars schools don't have, whatever situation causes it whether it be underfunding, defunding or cuts to other funding programs that causes cuts on education program, whatever those schools need —if they're going to get it, it will still be offset by the people living in those areas from ad valorem taxes.

This is going back to when I was CAO for the City of Jackson. I know what the budget allocation looks like for what we had to provide for the school district. Every dollar that the schools don't have makes it more difficult for us to provide those services to the school and to the community. By far, the funding for the schools is always going to be something that I'm going to fight for.

What other policy issues are you passionate about, and if you could pick, what committees would you like to serve on?

If I could get on Finance and Insurance (committees)—the money committees—the Appropriations Committee and the newly formed Ways and Means Committee. Those are by far high-ranked for me.

I like to create additional opportunities for public service. I think that if you look at in light of what's going on in France to Orlando to Dallas, there is a need to have a more sound level of preparedness when it comes down to how law enforcement in the community have a level of trust so that there's a respect on both sides. Then when it comes down to dealing with homegrown terrorism or domestic terrorism from foreign bodies (it's important that) we have a relationship across our law-enforcement communities and that inner-operability is not an issue.   The only way we do that is by providing consistent resources that public-safety officials can rely on to work on preparedness and to deal with recovery in worst-case situations. So I plan to introduce legislation that speaks to funding opportunities and collaborative opportunities for public-safety entities to work together and advance their skillsets.

We need more infrastructure. The Mississippi Economic Council put out a report last year that outlined clearly what Jackson knows and what nearly $40 billion in EPA consent decrees of municipalities and counties across this country know. We have degrading, eroded infrastructure, and that's from streets to water to sanitary sewer infrastructure problems that will have to be dealt with.

The downside to the position we are in now is it's taken about 100 years or 40 years for some systems to get to where it is now. We're going to have to start finding ways for municipalities and counties to deal with these situations much more quickly than we have.

Healthcare is something I'm big on: the affordability, accessibility and the quality, in any shape, form or fashion, will always be what I'm pushing for. From my time working at Medicaid, I know the benefit that Medicaid dollars and services offer to Mississippians. That has got to be sufficiently provided to people so they can take advantage of those services.

I will be introducing legislation that speaks to the importance of mental-health services. When I look at the hundreds of thousands of kids across our state that have some type of mental disposition who because of some budget cuts from this year will not be receiving those services or will be receiving them in a reduced fashion, it saddens me, but it's also a frightening thing for me. When the services are not available, and the funding is not set aside for them, they are out there now in a different position. With my background being in juvenile justice, I know that when kids who were (higher) at-risk, who have limited resources at home, start receiving limited or reduced services and funding from the community and from government then it puts them in a higher bracket of potential for falling between the gaps from the educational side or ending up getting caught in the justice system.

That's not my bag. And I'll be fighting to make sure that funding for mental-health assistance is restored.

What do you think separates you from the other candidates running for the District 72 seat?

We have a democratic society, and everybody has a right to run, so it's not that I'm the only person who can represent District 72. I'm just saying I'm the best qualified at this turn in the road.

This interview has been edited for clarity and length. The deadline for candidates to register with the secretary of state's office in the District 72 House race is July 25. Check back for more interviews with District 72 candidates in the coming weeks and visit jfp.ms/state. The election for the District 72 seat will be held August 23.