To See the Face of God 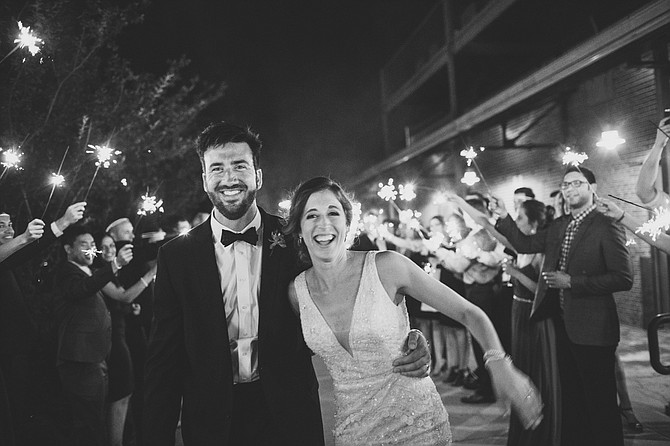 "She's going down," whispered my wife, and I glanced in alarm at the bride. Chaos reigns when a member of the wedding party faints; we have seen it. Rachel, lovelier than ever, was not smiling. As she held Daniel's hands while preparing for her vows, she swayed slightly from side to side, breathing through her mouth, swallowing nervously, her head moving like a nervous bird being watched by a cat. A line from Victor Hugo's "Les Miserables" popped into my head: "Her amazed and uneasy air added something indescribably enchanting to her beauty."

The wedding was in the south end of The South Warehouse, partitioned off from the rest of the building by curtains. Indistinct forms moved on the other side of the curtains, like ghostly hauntings as the caterers set up. The delicious smells wafting from behind the curtain took most of my attention away from the ceremony. It turns out that Rachel loves bacon, and behind that curtain were great plates of it, as well as other delicious foods fit for a medieval feast.

Rachel struggled to maintain composure as the vows began. Daniel spoke first. He gazed into her eyes with a deep intensity; his powerful, sonorous voice and calm demeanor visibly relaxed Rachel, and then he made a joke, too soft for me to hear it, but her signature smile appeared.

The members of the bridal party were not lined up on either side of the bride and groom segregated by gender but instead alternated across the front of the space, bracketing a white wooden trellis overflowing with flowers. The bridesmaids looked stunning in their simple floor-length pleated teal gowns with spaghetti strap shoulders and minimal jewelry. The men wore black suits with matching ties, except for Daniel who was wearing a bowtie.

Rachel, tall with a slim, willowy figure, an angular face and light brown hair that was neatly coiffed, had to look nearly straight up to see Daniel's face atop his 6-foot, 5-inch frame as she began her vows. Her lips moved, though no sound came out. But it was almost as if saying the words infused her spirit with a power greater than herself; with each word, her voice grew louder and steadier. By the middle of her vows, Rachel was back and having fun.

The toasts from the maid of honor and the best man were among the best I've ever heard. They were heartfelt, given without notes and expressing a depth of love seldom (if ever) adequately acknowledged verbally. The bride's sister, her fraternal twin, who looks similar enough that you know they are sisters, but dissimilar enough to know they are individuals, spoke of the intimacy of growing up with a twin, how they had no secrets, and when they couldn't sleep, they would talk about their hopes and dreams and fantasize about their wedding day. Then, she turned to Daniel with tears in her eyes and told him that he was the man in their dreams. The best man (my son) spoke of their lifelong friendship, the soccer and football games played, the destruction wrought by two hyperactive boys who always had a ball in hand or at foot, and of the unbreakable bonds built between them. Turning to Rachel, the best man welcomed her as a sister and spoke of his delight when Daniel told him about his perfect match.

The reception area was covered in flowers of all shapes and sizes. The food was delicious; in addition to the bacon bar with just plain bacon, we could enjoy bacon-wrapped risotto, bacon pudding with crackers and bacon-wrapped breadsticks. The reception featured other food options as well; in fact, it could feed a small army, and the caterers served until the end of the wedding. My favorite was the cheese grits with spicy shrimp served in tall martini glasses. It was so elegant and so southern.

Off to the side, with her eyes on everything, was the wedding planner from Kendall Poole Event Planning. I had watched her orchestrate the entire evening, from starting the music to lifting a finger here to send a bartender to a parched table, handing Daniel his coat when a photo was needed, or providing drinks to the bride and groom after their dance. I love organization, and she is a great model.

"Life at its very best," I thought. It was late then, the wedding reception almost over, and I sat alone at our table. The guests had thinned out some, with just the hardcore friends of Rachel and Daniel and relatives left. Most everyone was on the dance floor swaying to a beautiful rendition of "Stand By Me" by the House of Cards band from Yazoo City. Just in front of me was an active group of athletic-looking men and women in their late 20s—Daniel's ultimate Frisbee friends. Bridesmaids within a larger group of childhood friends and the many relatives that come with growing up in a small town like Quitman, Miss., surrounded Rachel. To my right, a small circle of the groom's brothers and their wives move lazily with the music. His friends included a contingent of Old World Italians, distant relatives Daniel had met while on a Fulbright scholarship in Italy. Sometimes the magic of life transcends the ordinary, and for a short while, we are reminded of the deeper meaning of life: To love another person is to see the face of God (from "Les Miserables").