A Couple We Love 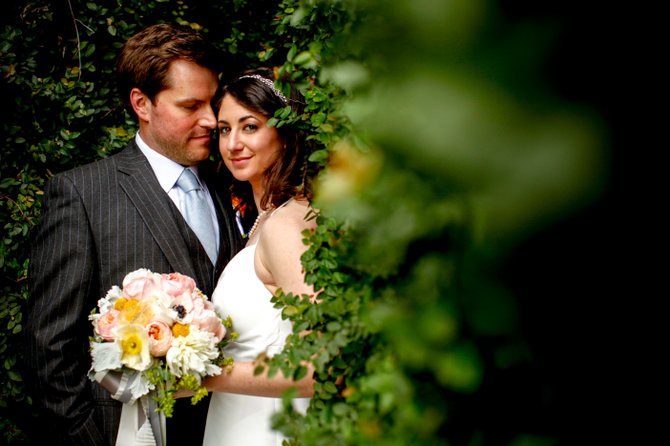 Chris Myers and Rachel Jarman wed in a ceremony filled with community blessings and personal touches. Photo by Josh Hailey

If you're looking to have a fun wedding, I suggest having a table of French fries and sweet-potato fries available for snacking during the ceremony. Other options for an enjoyable time: have the Southern Komfort Brass Band play Hava Nagila; serve specialty cocktails before, during and after the ceremony; or incorporate a singer-songwriter, two bands and a rocking playlist for a night of dancing. And if you manage a wedding with all the above? Well, you might just throw the perfect party.

Of course, I would expect nothing less from the wedding of Chris Myers and Rachel Jarman. The Jackson Free Press featured Chris as a Man We Love in 2009 and Rachel as a Woman We Love in 2011. And we do. We love them for the many ways they contribute to making Fondren and Jackson a place we love to call home.

Rachel works for the Goldring/Woldenberg Institute of Southern Jewish Life, Chris for Cooke Douglass Farr Lemons Architects and Engineers. Chris led a group working to keep the Fondren Strip alive, was a co-director of the Crossroads Film Festival and is known around town for hosting amazing barbecues with former roommate Arthur Jones.

Rachel was a vocalist for the Bachelorettes, an organizer for Figment and host of the first Hanukkah party I ever attended. When the readers of JFP voted the two "Cutest Couple" in the City Superlatives in 2011, no one was surprised. Chris and Rachel were engaged the night before to the 2011 Mal's St. Paddy's parade, and Roy Adkins' photograph of the two the morning of the parade remains one of the cutest pictures I've ever seen.

Their wedding was one of the few where the bride and groom were equal in the planning and implementation. It incorporated their love for Rachel's Jewish culture, good food, Jackson and her arts. Chris designed and built a chuppah (a traditional Jewish wedding canopy) under which the couple would make their vows, using limbs found near the couple's Fondren home. The couple planned to hold the ceremony in their back yard, but the Tuesday before the wedding, friend and WJTV meteorologist Morgan Ashley warned them of the high chance of rain on the wedding day. Instead, the couple married in the planned reception site, Duling Hall.

While changing the wedding venue the week of the wedding would cause most couples anxiety, Chris and Rachel rolled with the punches. The change of venue worked beautifully and allowed for easy transitions between pre-ceremony social time, the ceremony and the reception.

Janine Julia Jankovitz, a friend from Rachel's days as an intern with the Woldenberg Institute of Southern Jewish Life, performed the mostly traditional Jewish ceremony on the stage of the Duling Hall. Due to the space's layout, I had a great view for the ceremony even in the back of the room (and I had those fries at arm's reach). When asked by the bride to officiate the wedding, Janine responded by asking, "Can't I just be a bridesmaid?" But the couple had chosen to have a wedding party of two, so Janine agreed to go through the American Marriage Ministries to become a legal officiant. She worked with the couple to adjust the traditional Jewish ceremony to their sensibilities.

The ceremony started with a procession of the bride with her parents, a welcome blessing under the chuppah, and then Kiddush, which is a blessing of the wine. The couple drank wine from a Kiddush cup given to the couple from the groom's parents. The couple asked the guests to contribute by taking vows of a sort, to support Rachel and Chris in their marriage. Seven of the couple's friends and family members read the blessings of love, wisdom, health, art and beauty, community, friendship and celebration to the couple. A traditional Jewish celebration would not be complete without the breaking of the glass (and I got to yell "Mazel Tov!")

I have a few regrets in life, but one is that I didn't partake of the couple's donut-hole "wedding cake." I was busy eating those French fries and drinking Prosecco (Note: Weddings should always be celebrated with bubbly) from the couple's drink menu of old fashioneds, Prosecco and fondropolitan (the couple's take on a cosmopolitan). Luckily, Fondren Cellars was across the street, so after the first 20 bottles of bourbon were gone, more could be purchased. If food and drink weren't entertainment enough, Southern Komfort Brass Band and Julia & the Strange Pilgrims performed. Following the live music there was much dancing (line and group, including a Zumba dance to "Jai Ho," from the movie "Slumdog Millionaire").

And did I mention there were French fries?

Invitations and program: designed by Chris and Rachel; letterpressed by Ed Inman in his Fondren garage workshop. (home.earthlink.net/~edinman)