Revamping the VA: A Slow Process 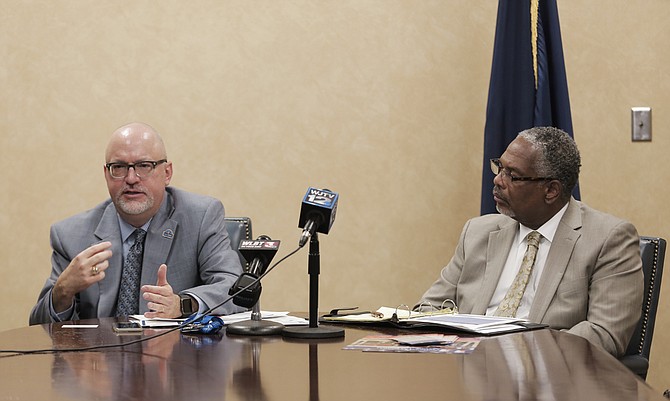 JACKSON — Darryl Brady, Jackson's regional benefit office director for the Veterans Administration, said his office is doing everything they can to reach out to military vets in all 82 counties in Mississippi.

"Our goal is to do everything we can to serve our veterans," Brady told the Jackson Free Press. "We try to remain objective and compassionate at the same time—the way the agency directs us to and wants us to."

When they leave military service, veterans can apply for a pension or compensation based on a specific set of criteria—set at the federal level—that regional directors must follow.

Access is a large part of the problem in Mississippi—many veterans don't have transportation to get to VA centers that can serve them, or they don't have the computers often necessary to help schedule appointments.

About Those Wait Times

The U.S. Department of Veterans Affairs' newest declaration, signaling a recognition of need for change in the organization, includes data transparency, same day services in primary and mental health care, extending clinic hours and engaging veterans in timely follow-ups to their appointments.

A lot of these changes focus on wait times, which has drawn both national and local criticism.

The wait time for those who have applied to receive benefits is lengthy, although it has gone down over the past few years. In May 2015, for instance, it took the Jackson office an average of 255 days to complete a compensation rating claim, to determine a veteran's eligibility for compensation. By April 2016, it takes 145 days to complete the same claim.

Recently, VA benefits offices have also changed the way they handle claims, attempting to expedite the process and spread workload across all centers in the country. The Jackson benefits office is the only one in Mississippi. Now, regional offices don't just field claims in their region, but they can help complete claims from other offices around the country, in an attempt to keep the processing time lower than it is now.

Brady said the VA is doing a better job at telling service men and women about the benefits they are eligible for before they even go into the service. When he got out of the Marines, he said, he just wanted to get out, and the last thing on his mind was benefits.

Veterans face significant challenges to access the VA regional benefits center and the G.V. Sonny Montgomery Hospital, both located in Jackson. The VA also has several regional clinics throughout the state as well. Transportation and access to computers to register for appointments or file claims are both issues that the VA is addressing in their latest update, an order that came from the top.

On the medical-services side, G.V. Sonny Montgomery Veteran's Medical Center Director David Walker said his organization and the VA as a whole have to be willing to change in order to stay relevant—and communicate directly with veterans.

"It's truly our belief that we need to make the veterans want to be our advocates," Walker said in a July press conference.

To do that, Walker said his staff needed to focus on how they treat veterans and on customer service.

"Are we meeting their needs?" he said then.

In 2014, an average of 20 veterans committed suicide every day, a 2016 report released by the VA shows. Only six of those 20 veterans had benefits. The Sonny Montgomery medical center has managed to keep mental health-care appointments down to a same-day turnaround but still struggles with primary health care.

The most recent VA data from last month show that the average wait time for a mental-health care appointment is a little over one day, while a primary care appointment at the G.V. Sonny Montgomery Medical Center is just over 14 days.

Walker said his hospital's goal is to get veterans scheduled for their next appointments as soon as they leave the center. Still, he said he has fewer primary-care teams in his hospital than he did in previous years, and that the decrease is not due to funding. It's about hiring.

"We have the money—we will hire primary-care physicians," he said. "Mississippi is a medically under-served state, and we're competing for the same doctors that (other Jackson and Mississippi hospitals attract)."

Walker said it is harder to recruit to Mississippi but that his office has also been given the federal authority to re-evaluate primary care doctors' salaries in order to be competitive. It's a demanding job, however.

"We're struggling with many of the same things that other healthcare organizations are," Walker said in July.

Part of the VA's plan to engage and interact with more veterans includes the establishment of MyVA Community Veteran Engagement boards, which consist of veterans and other community stakeholders involved in the well-being of veterans, in communities nationwide.

In Mississippi, Jeff Hammond is one of the MyVA board co-chairmen. Hammond is a 32-year U.S. Army veteran who served in Iraq and now works as the director of Veteran and Military Affairs at the University of Southern Mississippi. Hammond said the board's role is to represent community stakeholders at the local level to interact with the regional VA.

"Throughout the state, it's really a forum to get leaders to have big ears to listen to understand so we can do something about it—what (are) the unique problems that need to be addressed here in the state of Mississippi, and that's where we need to come in," Hammond told the Jackson Free Press. "Mississippi veterans aren't going to get a voice at the national level, but they can get a voice at the state level."

As to why so few veterans are enrolled in VA benefits in Mississippi, Hammond echoed what Brady said: When they get out of the service, the last thing most veterans want to think about is going through the process of applying for health care. Whether or not veterans even think about benefits, however, entirely depends on if they know about them.

"They've got to know what benefits are available and sign up for them. I think a big part of the problem is that they're not aware of their benefits," Hammond said.

"I meet two to three people a week that aren't even aware what the VA offers."

Besides education, Hammond said the other part of low enrollment numbers might be related to the quality of service.

"I'm not that deep into the quality of service, yet, but I will be with the board; there's long lines, and wait times are too long, but I don't know why, yet," he said.