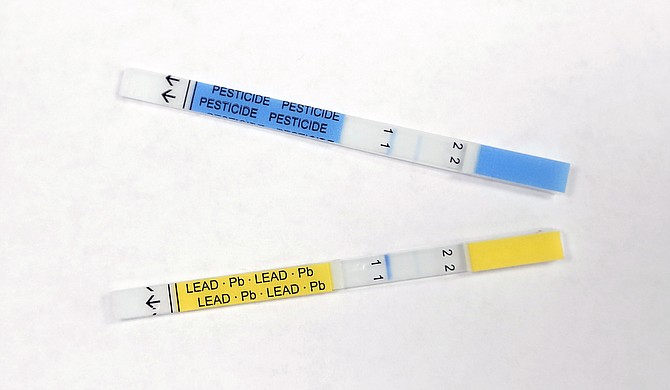 Lead tests on the water sources of central Jackson schools will be in the next round of testing, Jackson Public School District representatives said. Photo by Imani Khayyam.

JACKSON — One of the water fountains in Lee Elementary tested for lead above "regulatory levels" during the first round of tests that Jackson Public Schools conducted.

"Only 1 of 37 samples drawn tested above the regulatory limit," a press release from JPS stated. "The sample was isolated to the water fountain in the dining hall at Lee Elementary School. This drinking water source was taken out of service."

Officials from the district stated that they took multiple samples from the eight elementary schools in this round of testing, and that of the several samples from Lee, this was the only one above "regulatory limits." They are confident that the source was the water fountain.

"Because of the isolation, the way we took samples, we believe it's the unit itself because no other samples within in the school were above the regulatory limit," Pamela Young, coordinator of environmental services for JPS, said during a phone interview March 31.

On Feb. 25, Jackson Public School Board President Beneta Burt announced that the district would begin testing its schools. Sherwin Johnson, executive director of public and media relations for the district, explained the timeline the district has followed since that announcement.

"Shortly thereafter, and I don't have an exact date, but testing began. ... In our first round of testing, we were waiting on information from the City of Jackson, which indicated the areas of the city that were at the highest risk for levels above normal," Johnson said during a phone interview March 31. "And so once we received that information, we began to test in the schools that were in those areas that were our targeted areas...identified by the City of Jackson."

"That takes some time to do," Johnson said of the testing. "Because we have several water sources within each school building. It's a delicate process. Its not like we had one school to test, unlike some of the neighboring school districts. You know, our numbers are much larger. So therefore it takes a significant amount of time, and we are not even close to finished."

The City spokeswoman was not available by press time for comment.

Johnson said that the district has more than 62 buildings to test, including office buildings. "And that doesn't include other offices and buildings. I don't think that the time from her announcing was any indication of JPS not disclosing information in a timely manner," he said.

Executive Director of Facilities and Operations Fred Davis explained the testing process to the Jackson Free Press this week.

"We have to go in before anybody goes in the building. We only have a select group of people that know how to go in. We are actually conducting the tests ourselves, pulling the samples and sending them to a lab. We targeted the areas that the city said they had found at a higher level. We go in one school at a time because we have a limited staff."

Testing will continue over the next several weeks in a rolling fashion.

"We are about to start next week," Johnson said. "We are scheduling as we speak. So we will have another group of schools. We will test six to 10 more schools within the next two weeks. That's our goal."

Johnson also explained the order of testing. "Actually, we are tackling them by geographic location," he said. "We have what we call 'feeder patterns,' in which elementary, middle and high schools are generally in the same geographic area. And so whatever schools are close by, in that geographic area, we will tackle them as we go along."

Davis said that the next round of testing starts in the central area of Jackson. "In the central area, we have the older buildings that we are looking at, and they are elementary," he said.

When asked why the district provided a list of the schools tested and not the results of the tests themselves, Johnson said, "Based on the conversations that I have had, people just want to know if the levels are above normal."

"From my standpoint, parents want to know if our school is in danger, if our lead levels are above normal," Johnson said. "That's why the numbers (weren't) included in the press release." He did say that the information was also being released to the principals of the school. The Jackson Free Press is requesting the detailed results from the district.

The "regulatory limit" referred to is the same as the "action levels" found in the EPA requirements, which would be 0.015 milligrams per liter. The Environmental Projection Agency set this "regulatory limit" as a level which it deems to be "feasible using the best available treatment technology and taking cost into consideration," which is then "highest level of a contaminant this is allowed in drinking water," and is an "enforceable standard," that if exceeded would initiate involvement by other governmental entities like the EPA. This is what happened during the original round of city tests of houses that did result in a compliance plan being issued by the Mississippi State Department of Health.

However, there is another measurement, referred to as the "Maximum Contaminant Level Goal," that the EPA defines as "non-enforceable health goals, based solely on possible health risks."

"EPA has set the maximum contaminant level goal for lead in drinking water at zero because lead is a toxic metal that can be harmful to human health even at low exposure levels," the agency's site on lead states. "Lead is persistent, and it can bioaccumulate in the body over time."

"Young children, infants, and fetuses are particularly vulnerable to lead because the physical and behavioral effects of lead occur at lower exposure levels in children than in adults. A dose of lead would have little effect on an adult (but) can have a significant effect on a child. In children, low levels of exposure have been linked to damage to the central and peripheral nervous system, learning disabilities, shorter stature, impaired hearing, and impaired formation and function of blood cells.

"EPA estimates that drinking water can make up 20 percent or more of a person's total exposure to lead."

"As the City indicated, the water is not unsafe," Johnson said in the interview. "We have allowed parents to send bottled water to schools. We are receiving donations of bottled water from individuals, businesses and agencies. We also have our own bottled water that we make available at their request."

Johnson also wanted to express thanks on behalf of the school district and the superintendent, Dr. Cedrick Gray, for the support that the community has shown.

"We have been blessed by our partners and parents. They have been very supportive. So we have not ran into any problems having a limited supply of bottled water. But we aren't saying that we don't need it. We will certainly take it if it's donated to us. But we haven't had a shortage."