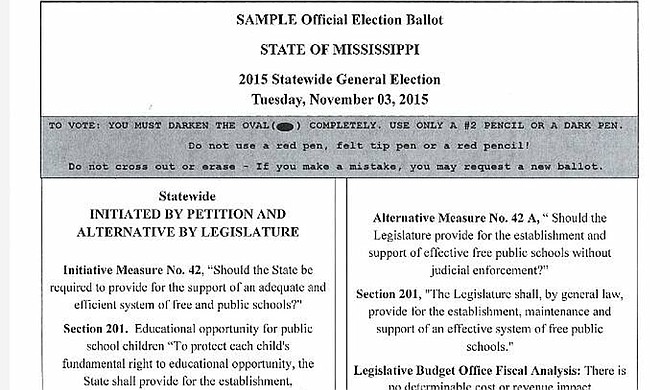 What the ballot would look like if a person votes in favor of Initiative 42. Photo courtesy The Parents’ Campaign

A group advocating for an education-funding initiative is calling foul on the wording for the referendum on the secretary of state's sample ballot. The 42 For Better Schools campaign has filed a lawsuit, asking a judge to include the Initiative 42's full language when it appears on ballots.

Initiative 42 and the Legislative Alternative 42A are both listed on the sample ballot by title only, followed by the constitutional wording of the proposed change and a fiscal analysis by the Legislative Budget Office.

42 For Better Schools filed the lawsuit, primarily because the fiscal analysis changed from the March ballot draft to the current ballot. Under Initiative 42, the analysis states: "Fiscal Year 2016 revenues are not adequate to support this funding increase without the Legislature having to cut agency budgets or identify new sources of revenue."

The complete wording of Initiative 42, as submitted to the secretary of state, who opposes 42, asks for full funding of schools over a multi-year phase-in, using excess funds in the legislative budget. 42 For Better Schools has never advocated for budget cuts, and the campaign called the House Appropriations Committee's call for proposed cuts from all state agencies this summer "scare tactics."

Republican leaders still maintain that since the language going into the Mississippi Constitution does not specifically include a "phase-in" funding model and that they would have to fully fund education immediately under the Constitution.

This would ultimately lie in the hands of a judge, if Initiative 42 passes.