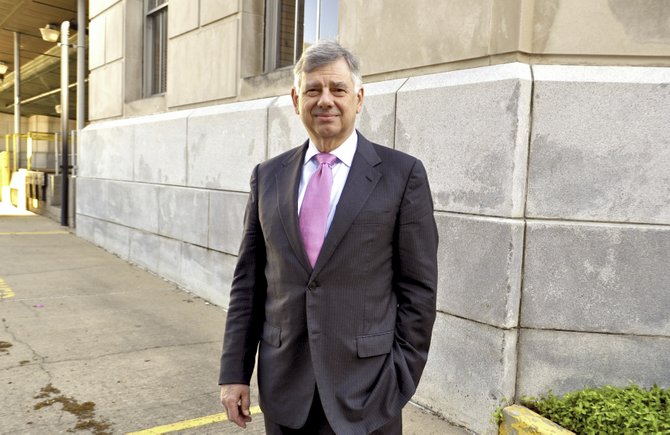 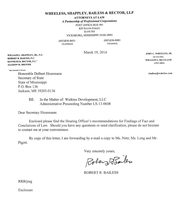 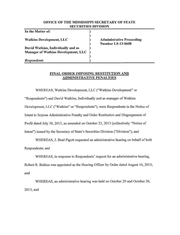 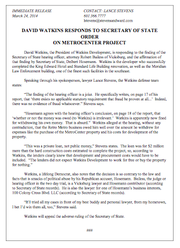 JACKSON — Jackson developer David Watkins just got bad news. It came in the form of a final order issued today by Secretary of State Delbert Hosemann concluding that Watkins "operated in a manner to 'mislead or deceive'" in the transfer of bond money from a Metrocenter project to an unrelated one in Meridian.

"Those actions included untrue statements in the bond offering, misleading and deceptive actions in the use of bond proceeds, and substantial omissions in payment requisitions, all in violation of Miss Code Section 75-71-501, Article 5 Fraud and Liabilities, of the Mississippi Securities Act of 2009," Hosemann said in a statement posted online.

After two days of hearings last October to determine whether Watkins had committed securities fraud when he transferred bond money allocated to re-do the old Belk Department Store in Metrocenter to help purchase and renovate a different property in Meridian. "The failure to disclose their intentions to use the bond proceeds for any other purpose other than renovating the space at the Metrocenter violates the general fraud statutes of the Mississippi Securities Act," Hosemann said in the statement.

Hosemann affirmed that Watkins and his company, Watkins Development LLC, the "respondents," misused bond money allocated to Retro Metro LLC, which Watkins helped start and then managed until July 2012. The money was awarded for the redevelopment of Metrocenter but transferred to a separate Watkins project in Meridian. In his recommendations to Hosemann, Hearing Officer Robert R. Bailess called that transfer of funds "an act and course of business that operated to mislead or deceive."

The secretary of state accepted Bailess' recommendation in the 19-page document dated March 19, that Watkins Development and Watkins, collectively, "immediately make restitution of $587,084.34 plus legal interest to Retro Metro LLC for using bond money allocated for the Metrocenter project to pay for work in Meridian. Bailess also recommended that Watkins pay a civil administrative penalty of $75,000 for omissions and untrue statements during the bond offering and sale; for violating Mississippi Code with employing and deceptive actions connected to bond proceeds; and for manipulating and omitting information from requisition forms. In addition to those fees, Hosemann ordered Watkins to pay administrative and investigative costs in the amount of $18,047.39.

Watkins responded today in a one-page statement distributed by his attorney, Lance Stevens. "The finding of the hearing officer is a joke," Stevens said in the statement. He added that "there was no evidence of fraud whatsoever."

Stevens charged that the secretary of state is fining Watkins "for withdrawing his own money. That is absurd." Watkins, Stevens alleges, was owed the money from Retro Metro that he transferred to the Meridian project.

"This was a private loan, not public money," Stevens wrote.

Stevens' statement accuses Hosemann, a Republican, of playing politics with Watkins, a "lifelong Democrat." The conclusion "smacks of political abuse," Stevens wrote. He also alleges that Bailess is a Vicksburg lawyer and a campaign contributor to Hosemann, as well as a lawyer for a Hosemann business, 100 Colony Cross Blvd. LLC.

"If I tried all my cases in front of my best buddy and personal lawyer, from my hometown, I bet I'd win them all, too," Stevens wrote.

Watkins will appeal the decision, he added.

The appeal must be filed with the First Judicial District of Hinds County within 60 days of the March 24 final order.

For extensive background on this story, see the JFP's Watkins Development archive.