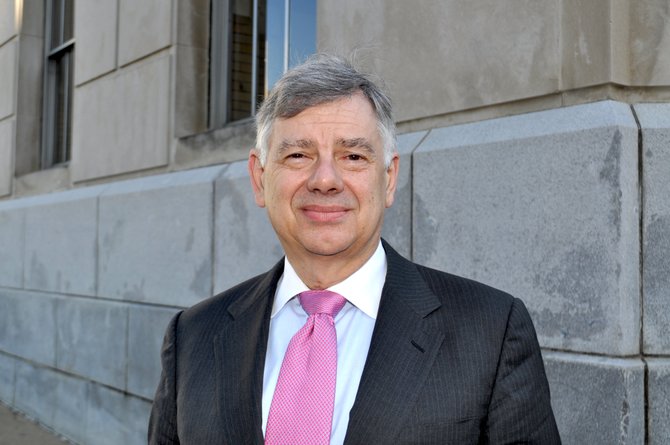 David Watkins has maneuvered his way through tough projects before, such as the Meridian Law Enforcement Center. Photo by Trip Burns.

Farish Street may be the biggest mess David Watkins has ever stepped in, but it's certainly not the first project he's had to work and re-work.

The Meridian Law Enforcement Center, the $7 million project on the other end of the money transfer that landed him in an investigative hearing at the Secretary of State's office, suffered at least one stop-and-go that threatened the development's completion under Watkins' management.

The Jackson Free Press broke the story on Oct. 29, 2013, that Mississippi Secretary of State Delbert Hosemann intended to charge Watkins with securities fraud for transferring more than half a million dollars in public money from the account of Retro Metro LLC, which he established to renovate the Metrocenter Mall, to the Meridian Law Enforcement Center..

Before building the MLEC, Watkins and the the City of Meridian signed a Oct. 1, 2011, agreement that set Watkins' pay at $10,000 a month to be that city's chief planner on a consultant basis.

On Dec. 1, 2010, now-former Meridian Mayor Cheri Berry and Watkins had kicked off the marriage with a public meeting designed to discuss the mayor's three development initiatives. The third initiative was called the "Meridian Public Safety Facility."

East Mississippi Business Development Corp. President Wade Jones described the meeting to The Meridian Star on Dec. 5, 2010: "The right people were sitting around the table. The group was diverse in its make-up, which ensures Mayor Barry and her administration will benefit from a wide range of insights. We as a community need to place our confidence in David Watkins and his track record. Look at the King Edward Hotel and the Standard Life Building in Jackson."

The city signed a lease agreement for the building in April of 2011, that would kick in once it was renovated. Then on June 8, 2011—the same day Watkins moved $587,084.34 from Retro Metro to the real estate-closing account—Watkins hosted the ground-breaking for the center where he, Meridian Police Chief Lee Shelbourne and Citizens National Bank CEO Archie McDonnell took sledgehammers to a wall at the site of the project on 22nd Avenue in a former Cowboy Maloney's Electric City building.

Demolition and renovation continued for the rest of 2011, but stalled in early 2012 because of funding issues. Watkins told the Meridian City Council at a meeting on Feb. 8, 2012, that he had sought $2 million in new market tax credits—a tax-break program as part of the federal Community Renewal Tax Relief Act of 2000—but that he had not secured them because of "problems with the coordination between the numerous entities involved with the tax credits," according to an account from the Meridian Star on Feb. 9, 2012.

Watkins had received notice from U.S. Bancorp's Community Development Corp. on Dec. 13, 2011, that it intended to issue the tax breaks, pending credit approval and the receipt of a litany of information regarding the project. That information included documenting other methods of funding, plans for the facility, permits, contracts, title and insurance information—the documentation Watkins said he couldn't get together before the end of the year.

The credits would have equaled 39 percent of total investment and be paid out in increments of 5 percent over the first three years, then six percent in the final four years.

At that meeting, the Meridian City Council voted to cut Watkins' consulting fee and payment to $1 per month until work resumed on the MLEC project.

"The reduction of the retainer was a mutual agreement," Watkins wrote in a memo to the JFP, provided by his lawyer Lance Stevens. "Since the MLEC project was becoming a reality, we anticipated that profits or revenues from that project would be sufficient to allow the company to continue its work on the Master Plan... . . We suggested the token sum of $1, simply to keep the momentum on the development and implementation of a Master Plan."

In addition to changing contractors, Watkins had to make revisions to the lease the city signed, which drew harsh criticism from Berry's political opponents on the city council. This, Watkins said, caused the most significant setback. "...The biggest delays were due to delays by the City Council to approve the lease revisions needed to secure the tax credit funding," Watkins wrote. "A 2-3 split on the council along political lines for and against the mayor was the main hurdle."

Watkins credits Archie McDonnell, the president and CEO of Citizens United Bank in Meridian who later testified on his behalf at the Secretary of State's investigative hearing over the securities-fraud accusations on October 30, 2013, with convincing the council to approve the proposal, which it did June 23, 2012, by a 3-2 vote.

The project immediately received the tax credits, and work resumed four days after the new contract was signed. Nearly one year to the day after work resumed, the city held the ribbon-cutting ceremony.

Watkins no longer serves in the capacity of city planner.

Today, the state-of-the-art facility houses the Meridian Police Department, as well as the municipal court, even as the Farish Street project in Jackson languishes and Watkins awaits his fate from the secretary of state's office.

See an archive of related stories at jfp.ms/watkins.

At the end of the day, it looks like Watkins did what he said he would do and got the job done. The $2 million in tax credits came through, the job was completed, and city now has a new state of the art facility that it could not have done with Watkins' work in getting those tax credits.

I met Mr. Watkins many years ago at an event honoring Sen. John Stennis in Washington. I have followed his career with interest because of his passion for public service, and his proven track record of accomplishments. I trust him and agree with the prior commenter. The mission was accomplished. The man does what he says he will do, even if it harder than expected. Let's move on to the next operation.

but, the simple part of this is: Did Watkins move public money from the Metro Center Mall fund to finance a Meridian project? It is not an evaluation based on success or failure; it is the fact of what can be done within the constraints of the law.

ROBIN HOOD LAW does not apply!

but, the simple part of this is: Did Watkins move public money from the Metro Center Mall fund to finance a Meridian project? It is not an evaluation based on success or failure; it is the fact of what can be done within the constraints of the law.

ROBIN HOOD LAW does not apply!

justjess. this is not public money. just because they use the word "bond" does not automatically convert it to public money. ask a bond lawyer. i did because i thought the same thing. but, i was wrong.

I don't mean to split hairs with msnative; however, according to the recorded intent of Sec. of State, Hosemann, Watkins would be charged with securities fraud for transferring more than a half million dollars of PULIC MONEY from an account set up for renovations at Metro Center.

Justjess, this is not a matter of splitting hairs. This is an undisputed fact.

There just isn't any public money in this deal. go to the MBFC website and verify for yourself. MBFC is not a government entity and it does not issue government backed bonds. It's all private, commercial money. period. look it up. Just because the City of Jackson is the ultimate tenant does not convert the source of funding from private money to public money.

I don't know about any recorded intent of the Sec of State that says anything to the contrary. But, if it's from the same staffers that prosecuted the fraud charge against Watkins, then I'd not have much confidence in it.

Politics notwithstanding, Watkins got the job done.