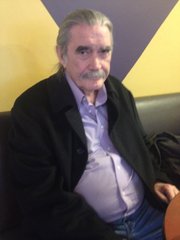 OXFORD - Johnny McPhail and Lana Turner have something in common. The six-feet-four-inch, 215-pound, longhaired, mustachioed north Mississippi farm boy-turned-actor and the Hollywood sex siren of yesteryear both got discovered in a cafe.

Turner was 17, skipping school and enjoying a soda in a Hollywood ice cream parlor. Soon she had a movie contract and was a rising star.

McPhail, now 70, was turning 50 and enjoying a cup of coffee at Smitty's in downtown Oxford when the casting director for the movie "The Gun in Betty Lou's Handbag" spotted him. "You've got an interesting face," the casting director said. "You ever thought about being in the movies? Come by and see me."

"And I did," McPhail told me as we sat in another Oxford cafe, High Point Coffee, and talked about a 20-year career that began with bit movie parts and local stage productions and has led to roles in acclaimed films such as "Ballast" and the HBO series "True Detective."

"I come from a small farm in Bruce, never had any idea I could ever do this," McPhail said. "I have always wanted to try different things, so when I turned 50 I decided to see what the film industry is all about."

After picking cotton as a youth, working in factories and sawmills, and serving a stint as a labor organizer, McPhail decided he liked acting. Through his work on "The Gun in Betty Lou's Handbag," a 1993 movie starring Penelope Ann Miller, Julianne Moore and Alfre Woodard, McPhail met "Memphis Mafia" charter member and buddy of Elvis Presley, Red West, who also had a role in the movie. West befriended McPhail and gave him acting lessons.

McPhail's acting philosophy is simple: Be natural. "When I went down to New Orleans for 'True Detective,' (writer and creator) Nic Pizzolatto said, 'Johnny, one rule is nobody does any fake accents.' ... They are looking for everyday people. ... It's hard enough to act without putting on a fake accent. One of the first rules I learned was, 'Don't let them catch you acting.'"

McPhail did lots of stage work in his early acting years, including a production of Larry Brown's novel "Joe" at Oxford's legendary Hoka Theater. He later got a part in the movie version of Brown's "Big Bad Love" with Debra Winger. He has been frequently cast as Big Daddy in "Cat on a Hot Tin Roof" at the Tennessee Williams Festival in Clarksdale.

McPhail acted in seven of the films shown during the recently concluded Oxford Film Festival, including his role as a zombie killer in "Last Call." McPhail's wife Susan, a rising actress herself, co-starred in the film.

McPhail's work in "Ballast," winner of directing and cinematography awards at the 2008 Sundance Film Festival, caught the eye of famed movie director Quentin Tarantino, who invited the Oxford actor to his New Orleans penthouse to read for a part in the 2012 box-office winner "Django Unchained."

"He's quite a character," Mcphail said. "The guy's a genius. He remembered every line I did in 'Ballast.' We sat down at a long table and read. He said, 'You are too kind of a character to play any of these parts. These are bad men.' I said, 'Quentin, I can play bad.'

He reached over and grabbed my face, kind of like being blessed by the Pope. He said he was going to write  me something." Tarantino wrote a part for McPhail in "Django Unchained" but, alas, it wound up on the cutting-room floor.

A film actor no longer has to be in Hollywood to get roles, McPhail said. "We do it all through the Internet now. I can be auditioning with someone in L.A. in a matter of minutes. I do it from home. I've got the lighting to make it look good."

Besides, he said, Oxford is an ideal place for an actor. "Oxford, Mississippi, is one of the best. We are equidistant from Shreveport—they make a lot of movies there—Baton Rouge, New Orleans, and Atlanta, then we are closer to Nashville," he said.

McPhail plays a bartender opposite star Matthew McConaughey in the March 2 and 9 segments of "True Detective." McPhail said he's never seen a harder-working star. "McConaughey stays in character all the time. If they yell, 'Cut!' everybody goes out and eats or whatever. He takes a chair, and he's in that script, reading and reading."

Looking back, McPhail said his acting life still seems like a dream: "Another quantum leap from a cotton patch in north Mississippi."

Joe Atkins is a veteran journalist, columnist and professor of journalism at the University of Mississippi. His blog is laborsouth.blogspot.com, and he can be reached at [email protected]